Our Coaching Evaluations continue today with a look at the newest member of Georgia Tech's coaching staff, and perhaps the one who's come under the most scrutiny over the course of this season.

Ray Rychleski graduated from Millersville State University, a small college in Pennsylvania, in 1979, and entered the coaching profession in 1981. He began with a tenure spanning 1981 to 1988 with Temple, as a graduate assistant and eventually as the Outside Linebackers & Rovers Coach. From 1989 to 1992, he made stops at Northeastern, Penn State, and East Stroudsberg, coaching several different position groups. From 1993 to 2000, he coached defensive line, outside linebackers, and special teams/tight ends at Wake Forest. He moved on to then-division-rival Maryland, where he coached special teams, tight ends, and H-Backs from 2001 to 2007. After a year at South Carolina, he moved up to the NFL, where he was the Special Teams Coordinator for the Indianapolis Colts from 2009-2011. While there, the Colts won two AFC South division championships as well as an AFC Championship in 2009, when they fell in the Super Bowl to the New Orleans Saints. (A game in which, ironically, a surprise onside kick after halftime set up the Saints to score a go-ahead touchdown.)

After not coaching in 2012 and serving as Special Teams Coordinator for the CFL's Montreal Alouettes, Rychleski joined Georgia Tech's staff prior to the 2014 season to serve as Special Teams Coordinator & Co-Offensive Line Coach. He replaced former coach Dave Walkosky in the role after Walkosky was fired for misuse of funds. Rychleski coaches the offensive line alongside longtime Paul Johnson associate Mike Sewak.

After only two seasons with the staff, Rychleski’s involvement with recruiting has been relatively limited. The "notable commitments" list above is exhaustive for his time at Georgia Tech. He has a grand total of 1 commitment — a more recent one from WR Steve Dolphus. He also was the lead recruiter for Trysten Hill, a long-time commit who then decommitted at the very end of the season. There are only one or two noteworthy players still in play who Rychleski is responsible for and could realistically score a commitment from, and if he were to do so, it would be a big deal.

Looking at two seasons isn’t a reliable sample size in a vacuum, so I want to look at how Rychleski’s two seasons compare to the three seasons prior under Dave Walkosky. In theory, good coaching would mean that positive trends continue, or negative trends are reversed. We looked on Monday at the offensive line’s trends (where pass protection improved from 2010 to 2014 before dropping off badly in 2015, and run blocking has seemingly degraded over time), so today we’ll look at some special teams statistics — kick return, punt return, and punting averages. Additionally, we’ll look at what Georgia Tech’s opponents have done on special teams over the same timeframe (not including punting averages). 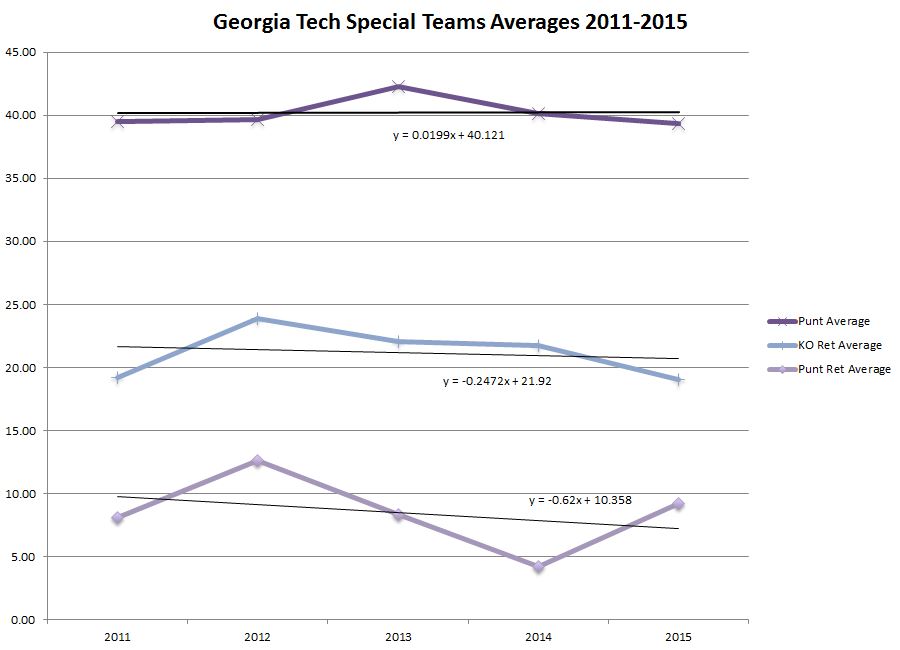 As you view this data, keeping in mind that Rychleski has only been in charge for the two most recent seasons is pretty unimpressive. From the time that Walkosky departed, punting averages have gone down both seasons, kickoff return averages have gone down both seasons, and only after a steep dive in 2014 did punt return averages make a rebound in 2015 -- the only stat that's improved from where it was two years ago. You could very easily make the argument here that, given the nature of these things, opportunities to make plays are limited, and so one or two plays could be outliers and heavily influence these outcomes. To that, I'd reply that it's just the nature of special teams -- they represent a small portion of the game from a "number of plays" standpoint, but they can very easily impact a game in a big way.

So, the special teams production has declined under Rychleski. What about Georgia Tech's opponents' production? 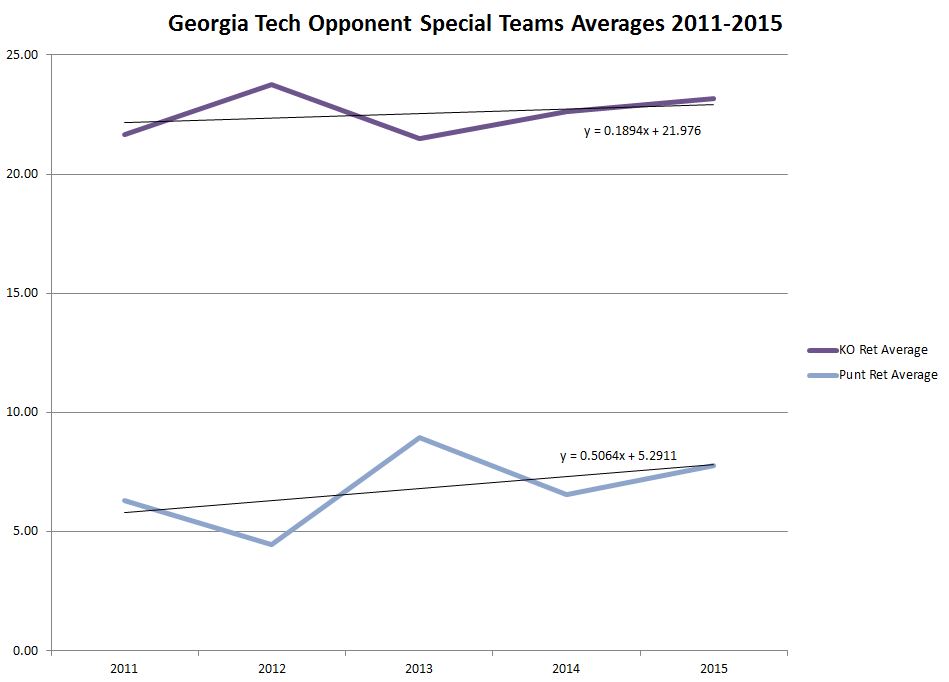 As I've said before, special teams hardly ever win games, but can very easily lose games. This season saw several special teams breakdowns that cost the team games. There were multiple missed field goals against Notre Dame, a pair of return touchdowns by Duke, an onside kick was recovered before it had gone 10 yards against UNC, the ball was snapped over Ryan Rodwell's head or at his feet on multiple occasions, he shanked punts throughout the season, and on and on. It became a comedy of errors at times.

It should be mentioned, too, that there were plenty of good special teams moments throughout the season. Chris Milton downed a punt inside the 1-yard line against Virginia Tech, he blocked punts against Tulane and UNC, and of course Lance Austin made THE special teams play. So it wasn't all bad.

The problem is, Georgia Tech only won once because of a great special teams play. You could easily point to multiple games that were lost on poor special teams plays. A two-touchdown loss to Duke that saw the Blue Devils score two special teams touchdowns? A short field for UNC leading to a pre-halftime touchdown after a poor punt due to a bad snap, in a 7-point loss? It really doesn't take much of a stretch on some of these.

For blunders like that to happen once or twice are just college football. To happen repeatedly over the course of weeks and months is a much bigger issue that points squarely at the man responsible for coaching special teams.

Prior to Clean, Old-Fashioned Hate, Paul Johnson was asked about whether to expect coaching changes this offseason. He gave us the following:

I’ll look at everything after the season’s over. For the most part, it’s the same coaches who won 11 games and the Orange Bowl last year. They didn’t forget how to coach overnight. Now, is everybody accountable? Yeah, I’m ultimately accountable, and everybody’s accountable for their position. I’ll sit down and take a little time and think about it and figure out what we need to do to get it right.

It's the bit about everybody being accountable for their position that comes to mind in the case of Rychleski. Here's a man who coaches two groups: the offensive line (in some capacity), and the special teams. For the entirety of this season, the first one was a problem, and for a majority of the season, the second was a problem. There are specific instances where the special teams could be pointed out as key contributors to losing efforts, and it's more than just one or two games, to boot. As much as this is college football, and mistakes happen, and sometimes the other team makes a great play, a consistent pattern of varying special teams errors are indicative of poor coaching. Add into that the fact that Rychleski was additionally accountable for an offensive line unit that seemed to consistently be a liability, and it doesn't paint a pretty picture for his performance this season.

Rychleski's recruiting record, while not expected to be extensive given his short time at Georgia Tech, is hardly something we could definitively say is a strength. Depending on how this recruiting season plays out, that tune might change a bit over the next month. For now, though, it is what it is -- and it's nothing to write home about.

If Paul Johnson were to sit me down in a room today and ask me to point out the biggest reason why he should keep each individual on staff for 2016, Rychleski is the one coach I'd have the hardest time explaining -- and it's not even close. There's something to be said for staff continuity and its effect on both recruiting and coaching, and it seems that Coach Johnson values that continuity quite a bit. At the same time, a look at Rychleski's track record at Georgia Tech raises legitimate questions as to whether the value added from continuity outweighs the potential that negative trends in performance that have arisen over his two years on staff.

If Paul Johnson were to sit me down in a room today and ask me which coach I thought least deserved to remain on staff for 2016, I'd know my answer immediately.