Our evaluations continue with a coach who's coached with Paul Johnson for over 20 years, including his entire tenure on the Flats.

We continue our series today with a look at perhaps Coach Johnson's oldest friend and assistant in the coaching business, and one who's been at his side for his entire tenure at Georgia Tech.

A native of Johnstown, PA, Sewak graduated from Virginia in 1981 after a career as a three-time letterwinner at offensive line. He began his career with a short 2-year stint at Hobart College in New York as Offensive Coordinator and Offensive Line Coach, before moving to Georgia Tech in 1984 to work as a Graduate Assistant under head coach Bill Curry. A year later, he moved to Georgia Southern to work as an Assistant Coach, where he met and worked with then-Offensive Coordinator Paul Johnson for the first time.

He followed Johnson to Hawai'i in 1987, where he served in the same role and they coached together until 1994. While Johnson spent two years as the Offensive Coordinator at Navy from 1995-1996, Sewak was the Offensive Coordinator and Offensive Line coach at Ohio. When Johnson was hired on as head coach at Georgia Southern in 1997, Sewak returned to Statesboro to serve as Johnson's offensive line coach. When Johnson was hired as head coach at Navy, Sewak took over as head coach at Georgia Southern, a role he held from 2002-2005. He was relieved of his duties at the conclusion of the 2005 season.

After taking the 2006 and 2007 seasons off from coaching, Sewak was reunited with his old friend and colleague when Johnson put together his initial staff at Georgia Tech. Sewak was named co-offensive line coach alongside Todd Spencer, who had been Johnson's offensive line coach at the Naval Academy. Following Spencer's resignation after the 2011 season, Sewak had the "co-" removed from his title, as he was named the team's primary Offensive Line Coach. He's served in the role ever since, and is one of only two remaining members of Coach Johnson's initial coaching staff at Georgia Tech (along with Wide Receivers Coach Al "Buzz" Preston).

As you look through the list of signees and commitments that Sewak has been responsible for over the years, there are two things that are pretty immediately obvious:

So, before we go any further, we should probably point out Sewak's utter lack of involvement in recruiting classes prior to 2013. Over a course of 5 recruiting classes, Sewak had 2 commitments and not a ton of targets overall. His contributing level was almost assuredly a detriment, as Georgia Tech recruited against other schools with the full force of a coaching staff recruiting.

However, over the past few years, that has very clearly changed, as Sewak has gone from a liability to an asset when it comes to recruiting, roping in several of the team's best recruits over the past two recruiting classes in particular. It's unclear whether his role changed or whether Coach Johnson's approach to Sewak's recruiting changed, or even if Sewak is just trying a little harder than before. Either way, it has unquestionably improved.

Perhaps the biggest mark on Sewak's recruiting record might not be his fault or even Georgia Tech's fault at all, as Sewak was the primary recruiter for B-Back prospect Brendan Douglas. You'll remember that Douglas was an Augusta native who was committed to Georgia Tech for a long, long time, only to flip his commitment to georgia less than a week before Signing Day. It was a major gut punch for many Georgia Tech fans, and no doubt was hurtful for the coaching staff as well. It's hard to blame Sewak for the occurrence though -- it seemed to be a personal decision for Douglas that no amount of recruiting was going to undo.

If we were doing this evaluation a few years ago, Sewak's recruiting would come back graded as a resounding "failure". His recent turnaround has been very encouraging though, which has to be taken very strongly into account. If his recent trend can continue, there would be no choice other than to call it a "success".

Grading Sewak's coaching, even over his extended tenure at Georgia Tech, is a little difficult -- Coach Johnson has always elected to use two offensive line coaches (although since Spencer's departure, Sewak has been joined by Dave Walkosky and then Ray Rychleski, both of whom were also Special Teams Coordinators). Additionally, it's tough to quantify an offensive line's performance with so many variables surrounding their production. For our sake, I'm going to use two metrics -- B-Back yards per carry (to measure run blocking) and passing attempts per sack (pass blocking). 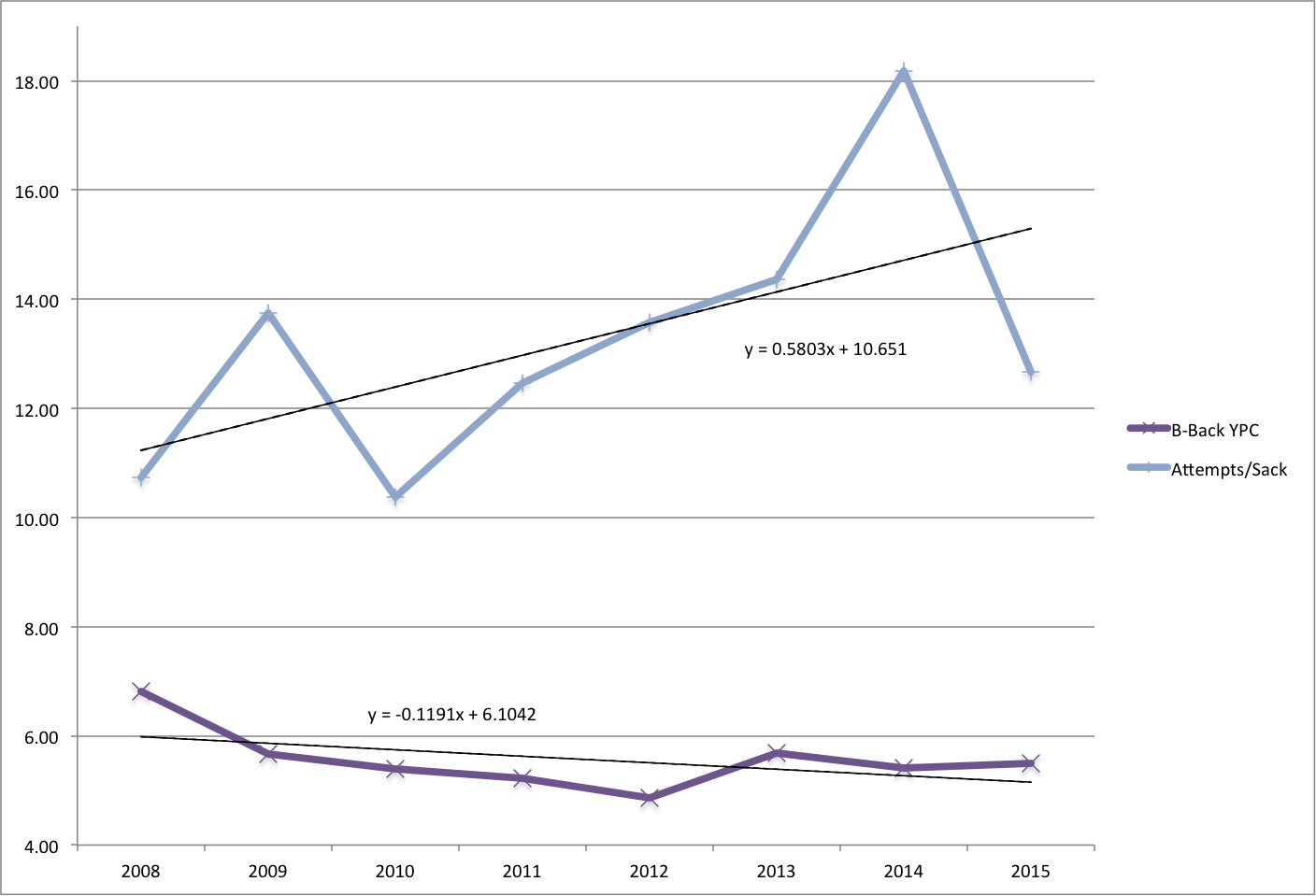 We'll start with the pass blocking. You'll see that the two lowest points under Coach Johnson were in 2008 and 2010 -- when the system was still being installed and the right players were still being recruited. Then, from 2010 to 2014, the sack rate continually dropped, with the sack total staying relatively consistent as the number of passing attempts rose. (Under Johnson, quarterbacks have never been sacked less than 11 times in a season, nor have they been sacked more than 16 times in a season. Meanwhile, there was a major jump in passing attempts in 2012, when the team rose from around 160-165 attempts per season from 2008-2011 all the way to 190-200 attempts per season from 2012-2015.) Theoretically, as the team began to pass more and more opportunities for sacks arose, more sacks would occur. However, the number has stayed relatively consistent while passing attempts have increased -- a sign of good coaching!

Again, this is an imperfect statistic that's influenced and affected by several things, but I think it speaks a bit to a larger trend that's carried over between several years -- suspect offensive line play has been a common theme of the Paul Johnson regime. Offensive line play is crucial in football in general, but especially when the offense is predicated on running the ball. There haven't been a ton of long stretches under Coach Sewak where the offensive line was truly dominant over their competition, even when that competition was of a talent level where you might expect that they could dominate.

2015 was a particularly bad year, full of miscommunication and unclear tactics, resulting in Vines and all sorts of criticism. Even in 2014, when the team finished the season with a dominant rushing attack against the likes of Clemson, georgia, and Mississippi State, the offensive line wasn't quite up to snuff, and was being helped out by senior skill position players elsewhere on the field. After a long time of this consistently being an issue -- across different players, with different co-coaches, against different opponents -- it's hard not to look at the one point of consistency through the whole time, that being Sewak.

Sewak's situation is about as complicated as it gets regarding the current coaching staff. Sewak has been coaching with Coach Johnson for a long, long time -- over 20 years now -- and knows this offense as well as anyone. He's got head coaching experience and has been coaching the offensive line ever since his career as an offensive lineman ended back in the early 1980's. Something else that should be mentioned? His players absolutely love him. Several players -- former and current -- have commented on how much they like playing for Sewak, and you'd have to think it played a role in him scoring the commitment of Parker Braun (younger brother of recently-graduated OL Trey Braun). Speaking of recruiting, he's had major success over the last two recruiting classes, successfully recruiting 5 of the best players between the two classes. Then again, a look back at the offensive line in the long-term suggests that the coaching they've received leaves something to be desired, and that's something that cannot be ignored.

I don't envy Coach Johnson as he makes decisions on who stays and who goes from the coaching staff, particularly regarding Sewak. He's an old friend, highly knowledgeable, well-liked, and seemingly a good recruiter when put up to the task. Then again, there have been plenty of legitimate questions asked regarding the offensive line's occasionally shoddy play through the years, and I'm not sure at this point that Sewak has a ton of great answers for them.

I won't be making a recommendation here on whether Sewak should be retained or not -- again, it's a majorly complicated issue, and his release could have several negative implications that I'm not even fully aware of. That said, I do think that, in the likely case that he's retained, Sewak should be "put on notice" with regards to his group's performance on the field. At this point, it's the biggest thing holding the offense back from even approaching its potential, and Coach Sewak needs to acknowledge that and be held accountable for it.