A hardly-newsworthy event happened today that should be considered a pretty big deal for Tech fans.

For about a month and a half now, most of Georgia Tech's 2014 signing class has been on-campus, working through classes, working out in the mornings, watching film, and basically getting their college football careers started. Two members of that class, however, were not able to do so as they cleared up some academic eligibility-related items. One of those individuals decided he wasn't coming to Georgia Tech after all last week (Myles Autry). Today, the other put everything to rest and made it to camp. 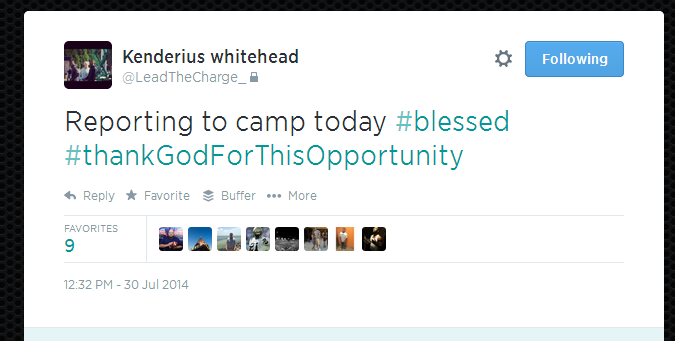 This, folks, is an example of a very small happening that is going to be a huge deal moving forward. Whitehead is likely to be the Yellow Jackets' #1 pass-rusher this year, replacing Jeremiah Attaochu at the WDE spot. All that, not to mention that fully completing his coursework and making it to Georgia Tech is a breath of fresh air after the cases of Autry and Travis Custis -- neither of whom were eligible immediately, and neither of whom ended up playing for Tech. (Either could return at some point, though it's unlikely that either does.)

For an idea of what impact he's capable of, here's a quote from Whitehead's teammate at NC State Art Norman, from an AJC article last week:

Congratulations to Whitehead! Please join us here at FTRS and welcome him (officially) to Tech!

Pumped to have Kenderius on campus? Will he be a difference-maker this fall?