The Week That Was: Week 1

Checking in on our opponents' Week 1 performances.

Share All sharing options for: The Week That Was: Week 1

Each week we here at FTRS are going to take a quick look at how our opponent's performed that week. In addition each week the changes in F/+ rating of our opponent's will be tracked. F/+ rating is the best publicly available rating of college football teams, more info can be found here.

F/+ Ratings of our Opponents, by week

This chart will show you the progress of each opponent as the season goes on. This week it only shows the changes from pre-season expectations (not much). The F/+ ratings merge the in game performance with the preseason expectations with each new week of data. This is to prevent 1 game from completely throwing off the ratings and to allow for opponent adjustments. Preseason performance will count less next week than this week, and even less after that. By Week 7 the only things influencing the ratings will be actual in game performance this season. 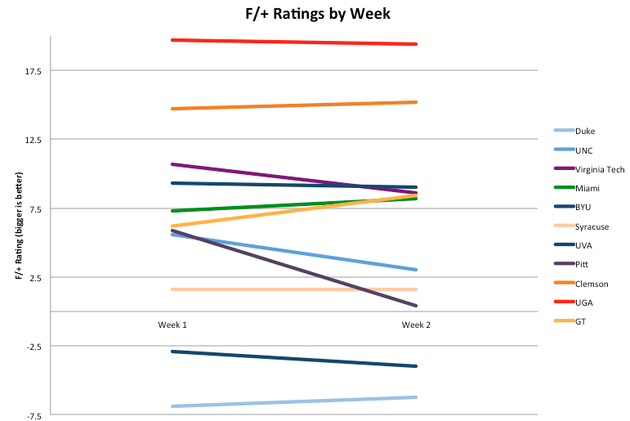 The preseason ratings are mainly why UGA is still ranked higher than Clemson. UGA lost by 3 points to a very good team on the road, and had a botched field goal snap that really doesn't measure your team's quality. The rating moved down slightly, but after only 1 game there isn't much reason to completely reorient the ratings. What strikes me most is the how even F/+ sees Virginia Tech, Miami, the Jackets, and BYU. It will be interesting to see how this group separates themselves this season. I'm surprised to see Pitt drop so much. FSU is now ranked as a top-5 team, granted Pitt got beat pretty bad but still, that is a big drop. I am also surprised to see BYU hold steady, as you'll read in a second that game was uuggglllyy. Anyway, what are your impressions with this chart? Personally I like it but I also made it so, there is a small bit of bias.

Duke beat NC Central this week 45-0. That is really all I can tell you from this game, next week we should know more as Duke plays Memphis in Memphis.

UNC got ran out of Columbia in a 27-10 defeat at the hands of the Clowney's. I was actually very impressed by UNC's defense and other than two huge plays they played fairly well. In addition their pace terrified me, I don't see our defense holding up well against a team that runs 79 plays. And while their defense had some lapses I wouldn't put too much stock into an opening night game at South Carolina, that is a tough venue to play in, let alone in your first game. This team continues to scare me. For more check out Tar Heel Blog.

Ouch. VT got hit from every where against Alabama, allowing an interception, a punt return, and kick return all to be taken back for touchdowns. Besides one long touchdown run (that one 77 yard run was more than Alabama allowed on the ground per game last year) the Hokie offense did a whole lot of nothing on the night. I was very impressed by their defense, particularly the D-line. This will be a tough team to play on short rest. I wouldn't take much else away from this game though, we knew the offense would look bad with Logan Thomas still at QB (my favorite nickname? Lolgan Thomas) and with the injuries they had in the off-season. Add Alabama to the equation and you get a disaster. For more check out Gobbler Country.

Miami beat Florida Atlantic by a pretty wide margin, 34-6. The only thing I took away was OH GOD DUKE JOHNSON WILL RUN ALL OVER US. He looks like he put on some solid weight and was running over people all night. And oh yeah he is still the fastest player on the field. Awesome. Pessimistic Matt knows he is going over 200 yards rushing against us. Realistic Matt is just praying Stephen Morris gets in his way. Miami has a huge game against Florida this week so we will know much more after that. For more check out State of The U.

BYU lost to Virginia this week. What? The game consisted of 24 punts!!! Apparently the game was super sloppy with the weather and poor play. I'll just leave yall with the game summary from Vanquish the Foe.

Syracuse fell to Penn State 23-17 in the battle of north east teams I know nothing about. But really though, I couldn't tell you much about this game or this team really. They play Northwestern next week, is Syracuse secretly trying to get into the Big 10? For more check out Troy Nunes is an Absolute Magician. (Who is Troy Nunes?)

They beat BYU, I really should have watched this game, but with 24 punts I'm glad I didn't. Next week they play Oregon, oh god. I'm kind of glad we don't play these incredibly good teams in weeks 1 and 2. For more check out Streaking the Lawn.

Pitt got ran over by Florida State. The thing is Pitt really didn't play that bad, FSU just played that well. Don't expect Pitt to be an easy win. For more check out Cardiac Hill.

Wow this game was incredible. Clemson beat UGA by 3, but the lead was 10 before a late touchdown by UGA. Clemson's defense did not look great with plenty of missed tackles. However, UGA's offense is plenty good, our defense is going to struggle to tackle the bulldogs as well. Sammy Watkins was awesome as usual, and while I didn't come away too impressed overall, I thought Boyd made some great plays to save their offense. Whoever their new RB is can tote the rock, lets hope he doesn't play that hard against us. Overall though Clemson just beat the 5th best team in the country when the 5th best team played a pretty good game. Can't ask for much more than that. For more check out Shakin the Southland. Also holy crap that entrance to Clemson's Stadium is off the chain, I am scared for my eardrums this year.

I will say one positive thing, Todd Gurley might be better than Duke Johnson. Uh oh. Oh and I just learned their best receiver, Malcolm Mitchel, is out for the year on a torn ACL. That sucks, tough break.

Is there anything else you would like to see on Georgia Tech's opponents each week? Let me know in the comments.