Georgia Tech's win over UNC was a weird one, a hard-fought one, and each unit performed a little differently than others...

It was a difficult day for Vad Lee passing. Between the poor weather conditions and the lack of protection at times against a violent UNC pass rush, he didn't have a very easy time. That said, he still managed 7/12 passing for 104 yards, one touchdown, and no interceptions. Then consider that he carried 24 times, but for only 55 yards, but that he was able to add a touchdown, except that he lost a fumble, and that he made a lot of good reads on the afternoon. I'm conflicted but fairly satisfied. It wasn't a dominating effort, but it was solid.

I also need to mention that Justin Thomas came into the game in multiple situations (when Vad had his helmet taken off, and another time when he got banged up), and it was Thomas who was the QB for David Sims' touchdown early on. He played phenomenally in the role that he was put in. He bumps up Vad's B to a group B+.

For the second time in four games, David Sims came within 3 feet of having 100 yards rushing, finishing with 17 carries for 99 yards (a whopping 5.8 ypc) and a TD. It was great getting to see him established within the offense after a struggle to do so early on.

Zach Laskey had a tough time today, with only 7 carries for 18 yards (2.6 ypc). I can't say there was much rhyme or reason as to his struggles, but I know that he also dropped a pass on a screen play where he had an opportunity to shine a bit.

Combine the two of them and they were pretty good, especially Sims towards the end. These guys get a B+ as well.

First, we have to mention Robert Godhigh. He became Tech's first 100-yard rusher this season, and the first for the Jackets since Vad went for over 100 in Chapel Hill last year. He got almost half of his yards on a 48-yard carry, and was in position for another huge run before he was brought down from behind just as he started to break it. It was overall a solid performance today from Robbie, something we've gotten used to.

Charles Perkins had his best career game since Duke in 2011, rushing for 26 yards -- all of it on a single carry on a good decision by Vad to pitch. Call me a fanboy, but the kid has struggled since arriving on campus and I was happy to see him get out on the outside and go for a big gain.

Tony Zenon might be the MVP outside of Godhigh in this position group. He only had 10 yards on 3 carries, but he made a catch for 6 yards, stepped in to return punts after Jamal Golden had to leave the game, and did a fairly good job blocking for his teammates. Nothing too flashy, but Zenon played a good game.

Synjyn Days went for 8 yards on 3 carries, Dennis Andrews got 5 yards on his only carry, and B.J. Bostic got 4 yards in as many carries with a catch for 7 more yards.

The perimeter blocking wasn't particularly good today, but this group performed admirably and took advantage of the opportunities they got. I'll give them a B.

All I'm going to say here is that DeAndre Smelter is going to be a big-time player for us this year. His skills and instincts are incredible for someone who's been away from the game for so long. Combine that with Darren Waller coming up with clutch catches when he had the opportunities, and I'm not worried about this pair a bit. 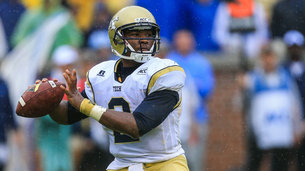 For more on Georgia Tech's win over North Carolina, check out the postgame wrapup.

These guys had a rough game, there's no two ways about it. It seemed like any time Vad wanted to pass, he was making decisions a lot quicker than he wanted to, and it took a while to get the B-Back established. They hung in there though, and by the end of the game there were running lanes galore as the Jackets looked to put the game to bed. It was an OK performance here, but they'll have something to prove against a talented Virginia Tech defense on Thursday.

Of these guys, only Euclid Cummings and Jeremiah Attaochu had more than one tackle. However, Jerry added his first sack of the season on a great play. Overall there was a lack of pass rush for a lot of the day, although there were some key moments where these guys really came through. They also had a rough time in run stopping, although they didn't get a ton of support from the linebackers either. Overall not a great day for them, but not a disaster either. They need to step it up as we get more into the season if we're going to be a legitimate contender in the ACC.

The starting linebackers combined for 5 tackles -- 3 from Jabari Hunt-Days, 2 from Brandon Watts, and nothing from Quayshawn Nealy. However, Nealy left the game in the first half and I don't believe he returned, and his replacement, freshman P.J. Davis, added 3 tackles. I want to give these guys a lower grade than I did, but in a win it didn't seem appropriate. These guys had a tough time all day between stopping runs and covering UNC TE Eric Ebron. Hopefully this gets better down the stretch.

I gotta tell you, this unit was the saving grace of the defense today. Jamal Golden and Jemea Thomas co-led the defense with 4 solo tackles, and Thomas added a pass break-up for good measure. Chris Milton added 3 tackles of his own, including the only tackle-for-loss besides Jerry's sack. Louis Young broke up a couple of passes, made 2.5 tackles, and had a clutch, momentum-killing interception midway through the 4th quarter on UNC's second-to-last drive. Props go out to him for sticking with his man through an afternoon filled with frustration. From there, Domonique Noble had a pass break-up, and Demond Smith and Lynn Griffin were able to contribute some as well. I was happy with how this unit performed, even given the adversity it faced of Chris Milton and Jamal Golden missing significant parts of the game after injuries. I look forward to seeing these guys build on this performance on Thursday.

"Special" is a good word for this unit. Sean Poole had an interesting afternoon -- 4 punts for an average of 46.5 yards, as well as a 20-yard carry for a first down that was called back by a holding call, and then resulted in a first down after, well...stuff got kinda weird. Harrison Butker had a pretty good day with kickoffs, and even recorded 2 tackles (officially more defensively productive than Adam Gotsis...). His coverage unit was pretty terrible though, and I just really don't know how I feel about them the last two games.

Weird game with a lot of ups and downs for the Special Teams units. I'll give them a B?

What are your unit grades, readers?