Our Countdown to Kickoff continues today as we look at our B-Backs.

(Clearly I felt the need to say we lost somebody...)

Before we get into it, I should explain something. I added the 'Fourth String' column to this table because I can't see putting Connors in the same line as Snoddy and Custis. I think Connors is a serviceable guy if 3 or 4 others are unable to play, as he showed last season. He scored 2 TD's, more than most walk-on types, and averaged 7.2 yards per carry on 7 carries. So as I said, serviceable -- but I don't ever see myself hoping that he'll be the guy lined up behind Vad when the game is on the line.

Now, for the nitty-gritty. First, the starter -- as I've said before, I think that David Sims is poised to have a big year. I think that, assuming he stays healthy, he has a massive year to culminate his time at Tech. Last year, Sims and Zach Laskey split snaps, and Laskey actually took the opportunity to really prove himself as a big-time ballcarrier in our backfield. However, were Sims able to avoid injuries that slowed his production all season, he would have seen a larger portion of snaps and would have accumulated a lot more yards and touchdowns. 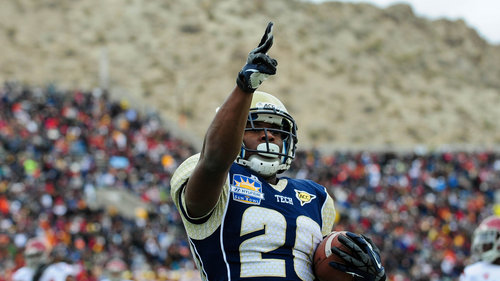 Read more about why I think David Sims will be an impact player this fall.

But where does that leave Zach Laskey? Again, I think Laskey's pretty impressive at B-Back, and he offers a slightly different style from Sims. Sims is stronger and a bit heavier, while Laskey is a bit taller and seems a step quicker. Sims by nature figures to be the workhorse back, but Laskey gives a change of pace that allows him to go for big chunks of yards. I expect Sims to play a majority of snaps this year, but I also expect Laskey to have a considerable impact when Sims is resting or nursing an injury.

What that leaves is Snoddy and Custis. I personally see Snoddy as a package-, situational-type guy at B-Back. At 5'9", 190lbs, he's anything but a typical B-Back. However, I do think that he has value. When I look at Snoddy and his skillset and consider how he'd fit in as a B-Back, my first thought is Tony Zenon's 2011 TD catch at Middle Tennessee State. I think Snoddy offers an even bigger change of pace, and I expect to see him in long-distance situations when we'll be in the pistol and need some extra speed on the field. I could also see it on a second-and-short situation where we're playing with house money and a gadget play could go for 6. In any case, I'm interested to see where Snoddy fits into the offense this fall.

Finally, there's the freshman, Travis Custis. I'm skeptical as to whether he'll play this fall, purely due to who's above him on the depth chart and the learning curve to not messing up QB-BB meshes. (It really is a delicate thing where, if you get it wrong, you can really screw the entire team over with a fumble.) It wouldn't surprise me to see him used occasionally, especially if Laskey or Sims need to miss time and they need a legitimate backup to the first-stringer. (From what I know, I'd rather see Custis as the backup there than Snoddy or Connors -- although Connors would be plenty capable of performing the same duties.)

I'd have to say that I think this corps of B-Backs could be our best since 2009, and no, I haven't forgotten about Anthony Allen in 2010. Keep them healthy, and this could be a very dangerous unit for opposing teams to handle.

Are you excited about the B-Backs this fall? Worried? Think Sims hits 900 yards? Does Custis see the field much?

More from From The Rumble Seat: