Our Countdown to Kickoff resumes after a day off yesterday with a look at our matchup against Clemson.

Clemson was a pretty great team last year -- their CFA Bowl win over LSU was one of the best wins of the year by an ACC team, if not the single best. This year, they'll take a step past Florida State and win the Atlantic Division. However, just because they're the best in the Division doesn't mean that they'll sweep the ACC. 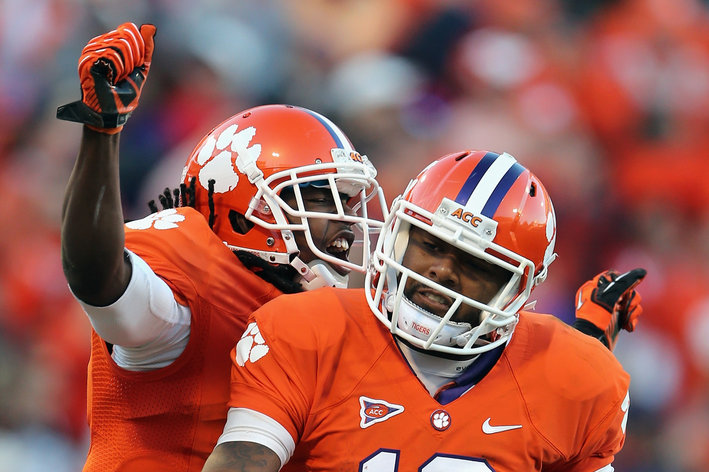 Also, just because it's a Thursday night game at home doesn't mean they'll win. For some odd reason, no matter how good Clemson is they always get a good game from Tech. (Similarly, no matter how good Tech is they always get a good game from Clemson.) This particular renewing of the rivalry will happen in Death Valley on a Thursday night in November -- no doubt one of the most incredible environments the Jackets will see all year. (Before you criticize my praise of Death Valley, you should know that a very prominent player from the CPJ era, who will remain unnamed, has told me that Death Valley was his absolute favorite place to play outside of Bobby Dodd Stadium.)

Clemson was tough last year. They should be at least as tough this year. Their biggest losses are their top RB, their top WR, their top TE, their Center, their top Weakside Linebacker, and their top 3 DBs. That said, at all of these positions the Tigers have a ton of firepower to reload, especially at RB and WR. Statistically, the offense is a top-10 unit nationally at 9th while the defense is very middle-of-the-road at 64th. The key to this game will probably be the Clemson Offense/Georgia Tech Defense matchup. The past few years have seen Clemson's offensive output take a dive when they play Georgia Tech, but it's hard to bank on that continuing to happen as the unit gets stronger and stronger. That said, Tech's defense will be improved this year and by November should be in full stride. If they can keep the game close and create a couple of turnovers, especially late in the game, they'll be in good position in the back half of the 4th quarter. However, let Clemson start rolling, and it might be over at halftime.

They can open up an early lead and build momentum in front of an electric Thursday night Death Valley crowd. Their defense needs to get off the field early and often to avoid being majorly winded late in the game, especially with Georgia Tech's ball-control-centric offense.

They are able to keep it close and capitalize on any 4th quarter mistakes that Clemson's offense makes. They need to minimize the three-and-outs and keep Clemson's defense on the field, hopefully ending in them being winded late in the game. The defense needs to contain Clemson's offense, which specializes in quick strikes and is capable of running 90-100 plays per game -- if that ends up being the case, the defense does not have the depth to contain them.

I think Georgia Tech gives the Tigers a good game but Clemson wins with a late score to seal it. The Jackets' defensive depth will be the issue in a game against such a fast-paced offense. Maybe you think this is our year to upset the Tigers in Death Valley though?