Our Countdown to Kickoff rambles on today with a look at our Homecoming matchup against ACC-newcomer Pittsburgh. 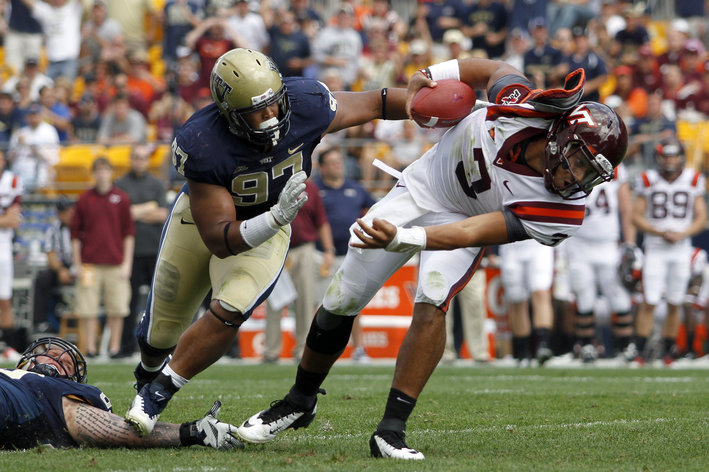 Here's where you're lucky that I'm a Louisville fan -- I've actually been scouting these guys for years. Last season Pitt had some pretty high peaks and some sickening low points. They scored a 2 TD win over #13 Virginia Tech in September, followed by a 3 OT, 29-26 loss on the road to national runner-up Notre Dame and a 3 TD win over #19 Rutgers to attain bowl eligibility. Now, consider that they lost by two touchdowns in their first game against FCS Youngstown State and got shellacked in their bowl game against Ole Miss, and you can see how the season was an emotional rollercoaster for Panther fans. They'll effectively be starting over at QB after the graduation of Tino Sunseri -- his backups combined for 85 passes in their most recent season of football, with Tom Savage's 83 as the QB of Rutgers in 2010 accounting for almost all of them. Savage has been named the starter, but between a transfer to Arizona followed by a transfer to Pitt, he hasn't seen game action since about the time Josh Nesbitt last did. This will be important to their offense because they're a pass-first offense according to their near 2:1 ratio of passing-to-rushing yards, and also because they'll be replacing their two best RBs. Ray Graham was last year's leading rusher and first-team All Big East, but this fall will be wearing a Houston Texans jersey. Rushel Shell was their second-leading rusher, and has transferred to West Virginia of all places. Now consider that they return their leading receiver from last year, but not #2-6, and they'll be replacing their All-Big East Center...you get the picture, the offense will be rough.

Their defense returns for the most part, and is the part that Tech should worry about. Last year they were a very stout unit, ranking in the top 20 in passing and total defense, and the top 35 in rushing and scoring defense. It should be comforting to know that their rushing defense is the softer spot, but also concerning that they'll have a ton of talent in the box. Then again, it'll be their first time facing Paul Johnson's Yellow Jackets, and while they've experienced similar offenses Johnson may pull something out of his bag of tricks early to try and get ahead.

They can slow Tech's offense early, so that they prevent any momentum from being gained and take the sellout Homecoming crowd out of the game. Offensively they need to limit mistakes, protect their QB, and develop momentum with their passing game. If they get a lead, they must keep their foot on the gas and attempt to bury a team that will be on fire from their Homecoming crowd.

They are able to score once or twice in the first quarter to open up a lead and draw the crowd in. Ball control will be very helpful when taking on a passing-focused offense such as Pittsburgh's. The defense needs to attack the backfield and disrupt the passing game, preventing rhythm from being established.

I think this game ends up a lot closer than we're expecting. Pitt's offense will have found its identity by this point and its defense will be tough. Do you think Tech pulls it off, or do we suffer our second straight Homecoming loss?