To kick off our scouting report series, we take a look at a guy who struggled through much of his senior year before coming on strong to win player of the game at the Sun Bowl.

System: In college, Sweeting played largely in Al Groh's 3-4 system. He seemed to struggle at times in it, as did many of the defensive players, which may be attributed to its complexity and its poor communication to players. Upon Groh's departure and Charles Kelly's takeover, Sweeting's play improved greatly (along with a majority of the defense). His play was outstanding in the ACC Championship Game, and earned him player of the game honors in the Sun Bowl. Overall, his struggles as a senior should be attributed to the system more than personal shortcomings (at least in this writer's opinion).

Most Memorable Moment: Definitely the Sun Bowl of 2012, in which he was able to lock down some highly talented receivers and hold USC to 107 yards passing. Sweeting recorded an interception in that game (returned for 28 yards) and defended numerous passes. Overall he was a huge contributor to Georgia Tech's success against a highly talented USC team, and fully deserved player of the game honors.

Best Anecdote: Honestly, December 31, 2012 was the best day of Sweeting's career for a number of reasons, this one included. Upon being named the player of the game, CBS reporter Tracy Wolfson asked Sweeting about his team's performance. Sweeting's first word? 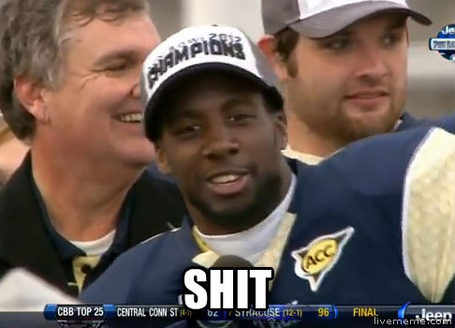 Bottom Line: Sweeting is a talented, physical corner who has major potential in the NFL. That said, he's not particularly close to reaching that potential, and will have to put in major effort and benefit from a bit of luck to become a starting corner. Overall though, his Combine performance should have answered questions about his straight-line speed, and he projects solidly as a second-string defensive back.

If you were an NFL team, would you take Rod Sweeting?