So let's get really scientific, really accurate, complete BS and try to break down each game to make the "perfect bracket".

Basically, this can go one of two way. Either a) I show everyone why I am going to win $1 Billion dollars in the coming weeks OR b) demonstrate to everyone that the word "predictions" should be replaced with "complete guesses" and show why quite a few people's jobs as "expert analysts" is sort of a joke...

So this is how this is going to work. I am going to be as objective as possible (which will be impossible for the Georgia Tech games- sorry), using the Four Factors (eFG%, TOV%, OR% and FTRate) while including PPG and their current streak. I will also be weighing their earlier season performance against the opponent. In the end, I might just pick the team that I feel is going to win the game. This is MY bracket and I'll cry if I want to OK!?!?

Here is an overall breakdown of the follow statistics that I will use in my analysis. I will also list these out for each of the matchup's that I break down. Thank you TeamRankings.com for that information. You can follow them on Twitter @TeamRankings.

Before we go any further, let's take a look at the bracket. (Brought to you by theacc.com) 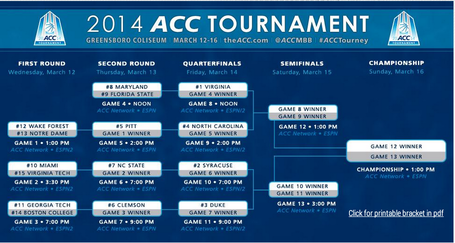 As you can see the top 9 teams get a bye, with the top 4 teams getting a double bye straight to the quarterfinals. Let's just jump right into this and not waste any more time.

This is a very interesting matchup. Notre Dame finished the season 1-4, with a win only to Georgia Tech while losing to Miami, Virginia, UNC and Pitt. Statistically, its worth noting how frequently Wake gets to the FT line. They are the best in that category in the ACC. As for the other categories, Notre Dame best Wake in all of them. They have the third highest eFG% in the ACC, but seem to have gotten into a bit of a rut as of late.

Notre Dame has a great perimeter game with Adkins and Connaughton, as well as one a great post player in Garrick Sherman (and his red beard). This Notre Dame team can be dangerous from all over the floor. Wake Forest on the other hand does a great job spreading productivity between all 5 starting players. Their last four games have been quite the rollercoaster, with wins against Clemson and Duke, and losses to Miami and Boston College. I've got Notre Dame in this one.

Knowing my luck, I am going to go and not waste my time with this game and it is going to be the first blemish. I really doubt it though. I'm not really going to spend too much time on this one, sorry VaTech. VT has gotten real beat up this season and they are one of those teams that are just waiting for the season to end. Neither of these team scores very many points, both shoot similarly from the field. Virginia Tech turnover percentage only best Florida State, ranking second to last in the ACC.

Before I go any further though, the only two wins of the season for Virginia Tech are against Miami!? Regardless of the earlier games this season, I don't think that Virginia Tech can come away with a victory here. It does complicate things a bit though.

The Hokies are on a 6 game losing streak and really aren't playing well from anywhere other than their center. I was very impressed with the way Joey Van Zegren plays. He gets above the rim and posterized Daniel Miller for Georgia Tech (one of the best shot blockers in the ACC) quite a few times in the last game of the season. One player cannot win this game. Miami needs to stay patient and not force shots against the Virginia Tech zone

So Georgia Tech has already beat BC twice this season, but this is a very concerning game for me as a Tech fan. Gregory explained in the presser earlier this week,"You've gotta make [Hanlan] earn everything." Boston College has a very different style of play in comparison to most teams in the ACC. Anderson at the 5 spots plays a softer post, but a threat with jumpers all over the court. They also defeated Syracuse right before Tech shocked them as well. Hanlan and Anderson, along with a few others, can beat up any team in the ACC if they get hot.

Statistically, the teams are pretty balanced. The Jackets need to work the paint and get the ball down low to Miller and Carter. Boston College needs their guards to get hot (ex. Hanlan putting up a historic 41 pts. against Tech one year ago).

The struggle for Boston College is similar to Georgia Tech, going 2-4 in games decided by 5 points or less. The Jackets have been without Carter Jr. and Golden for multiple games this season. The team back to a relatively healthy status has made some people hopeful for the future of this team. Both teams have struggled finishing games but have also showed potential when competing against some better teams in the ACC. I still have Georgia Tech in this one. I think Robert Carter Jr, Marcus Georges-Hunt, Daniel Miller and Trae Golden are going to make this team very competitive.

So here would be our bracket after one round: 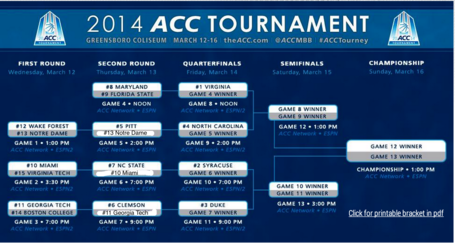 Pretty safe bets there huh? I don't really expect too many surprises in the first round to be honest... But let's get to the second round shall we?

Look how even that is. Wow! These team traded games earlier this season too. Florida State's three game win streak came to an end in the last game of the season, as Syracuse won the game late. Okaro White and Ian Miller are two great players for this team, threatening teams with quick transition, quality shooting and great post play.

On the other hand, Maryland went the distance in their last ACC game, defeating Virginia at home. They have very fast speed around the perimeter and can break into the lane and beat you up. Seth Allan and Dez Wells are two great players that really seem to have great chemistry with one another.

The issue with both of these teams is that they commit a lot of turnovers. I see the winner of this matchup controlling the ball and playing their game, not forcing anything. Florida State plays much bigger and seems to work their post players better. If they can feed the post and stay patient, I see them pulling out a W.

The last time these two teams met, the game went down to the wire. Pat Connaughton (19pts) and team shot very well from behind the arc. However, Lamar Patterson and Talib Zanna showed everyone why this team is a definite threat in the ACC. Patterson had 20 pts. 7 rbs and 7 assists. Along with Zanna's double-double of 17 points and 14 rebounds, the Panthers pulled out a W in overtime. Unfortunately Notre Dame led for the entire first half, once with a lead as high as 12.

Statistically, both teams shoot the ball relatively well. They control the ball however Zanna (and post) presence can be seen in their offensive rebounding percentage. They are a definite threat on the offensive boards. Those extra chances, along with Patterson's dual threat makes me have to take Pitt in the contest. Patterson is coming off of a career high 30 points against Clemson; look out for him to be dangerous throughout this tournament.

Miami is last in the league in scoring offense. A week ago when these two teams met, NC State lead for most of the game until the end of the second half when they gave away the lead. T.J. Warren seems to score very easily against so many teams, including Miami. NC State also has Ralston Turner as threat around the perimeter.

Miami on the other hand has lost way too many games by close margins to count them out. Rion Brown and Garrius Adams match up against NC State well and score very well- 85 against NC State last week.

The question here is can the Canes score well again against NC State. I personally think they can and will be taking them in this game.

Clemson seems to be Brian Gregory's kryptonite since he has arrived at Georgia Tech. The Jackets are 0-8 against Miami under Brownell, averaging only 53 points per game. The Jackets actually lead at half the last time these two teams met, until K.J. McDaniel carried the team to a victory. The first three halves this season against Clemson, Georgia Tech has been able to limit McDaniel. He ended up scoring 10 of his 16 points for the last game in the second half.

Georgia Tech also did not utilize Miller very well in either game and Robert Carter Jr. and Trae Golden in the first game. The second game showed us a great game from Trae, with 17 points. However, the second game Robert was flat.

Nnoko, Harrison and Blossomgame along with Daniel are threats for the Yellow Jackets. This Tiger team knows how to play all over the court and score very well. They utilize their size successfully. Clemson has founds ways to win games, but has just come off of an upsetting defeat against Pitt in overtime. This team is a definite bubble team for the NCAA Tournament and might need one, maybe two wins to seal their fate.

However, I honestly think that this is Georgia Tech's game. I think that if they can get through Boston College, the mental game is gone. They will have a 3 game winning streak and will be focused to take down this Clemson team. The struggle they have had against the Tigers is scoring, and with Trae healthy, Robert Carter Jr. shooting lights out from all over the court, and Marcus Georges-Hunt and Daniel Miller in the mix, I see good things for this team.

So there you have it. The second round. Let's see what the bracket will look like at the beginning of the Quarterfinal Round. 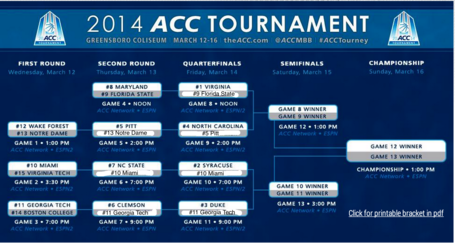 So I am risking a lot with some of these picks. I mean guessing these games are tough. I just hope I don't completely embarrass myself. For those of you from other sites seeing this, you might be questioning my Georgia Tech confidence. However, I have to say that both BC and Clemson fans would (or should) say that we are quite the treat for each of their teams. This Tech team is on a roll and if we come out shooting hot, we can compete.

Only time will tell.

I will be back on Thursday morning with the Quarterfinal, Semifinal and Final Rounds. Games start tomorrow night. Check them out and come back and talk about the games here.