Let's get the skinny on Tech's opponent in the 2013 B1G-ACC Challenge.

The ACC-B1G Challenge is entering its 15th year, and this proves to be an exciting one for Georgia Tech. We take on last year's opponent, Illinois, at the McCamish pavilion on December 3rd at 7:15 PM. The ACC has actually released a handy infographic with everything you need to know about the mini-tournament: 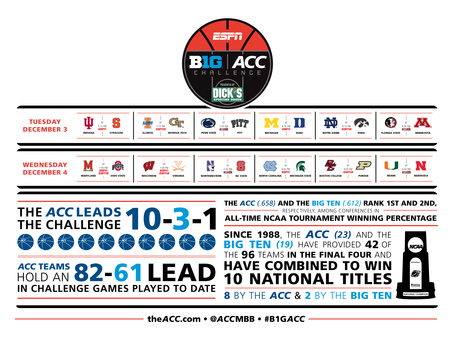 That 10 national titles stat is pretty impressive, and only goes to show that this made-for-TV spectacle is actually one of the better things to happen in college basketball in a while. Who do you think we draw in 2014? I'm hoping it's Maryland so we can give them a nice swift kick in the pants on the way out the door.

Let's do a quick examination of the Illini to see what we're up against this December:

Given the high turnover rate and the fact that they'll be playing on the road, I think the Illini will fall to Tech this year in a defensive tussle.

What do you think, Tech fans? How do you like the Jacket's chances in this early-season test?