Today's speculation examines the near future of our basketball program, based solely off of what we've learned in the past two years.

"WOAHHHH THERE. Feeling a little bold today, eh?" (I am, actually. Italic, too.)

That's right, I said it -- next year, after not making the NCAA Tournament since March of 2010, our basketball team will not only make the field, but will win 2 games.

You're probably reading this saying, "Dang, that's pretty bold. But then again, Joey makes some stupidly optimistic predictions at times, so what did I expect?" Again, just hang with me for a minute and let me explain myself.

Coming out of Paul Hewitt's tenure, our team couldn't do much of anything right -- literally, even the simple stuff like inbounds plays were like a puzzle to our team. Any wins we accrued were despite coaching rather than credited to it, and were likely caused entirely by the amount of talent Hewitt was able to obtain as a very good recruiter.

When Brian Gregory took over, it's not like the lights just immediately came on and everything was hunky-dory again -- as could be expected, there were some bad habits that needed breaking and new habits that needed forming, while there was a new style that was going to be implemented. At the end of the day, growing pains were aplenty. 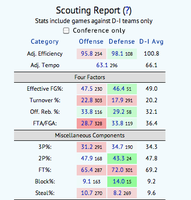 However, there were some signs of life that we didn't see at the end of the Hewitt era -- on defense, in particular. For a team that finished 11-21, the Jackets ranked in the top 60 nationally in effective opponent FG% (51st), opponent offensive rebound percentage (58th), opponent FG% on 2-pointers (24th), and block percentage (15th). Nobody likes an 11-21 finish, but I, for one, was encouraged by the fundamental improvements in year one of Gregory's regime, especially on the defensive end of the court. Offense was a major problem (scoring 50 points seemed like a major chore last year), but if you can only fix one side of things at a time, you should probably start with defense. Good move, Coach. 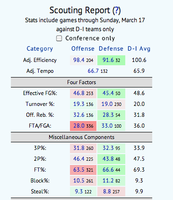 This year, things improved even more, with defensive turnover and steal percentages being the only defensive stats in which the Jackets were not a top-100 team. Along with the major defensive improvements, the offense improved more or less across the board, until you get to the shot percentage section, where nobody was able to explain their seeming year-long drought. Now throw in that our starting 5 in ACC play included 3 freshman and will return 4 players, probably our 4 best players all year (Miller, Georges-Hunt, and Carter Jr. for sure, Bolden is arguable for #4), and there's reason to be confident for next season.

The only loss from our starting 5 will be the senior PG Mfon Udofia. You never like to replace a senior PG, but Udofia struggled a bit this year, at times trying to carry the weight of the team solely on his shoulders. His replacement will most likely be the electrifying freshman Solomon Poole, a kid who has the tools and could end up being the best Tech point guard in 10-plus years. The concern about him at this point is his occasionally poor decision making and his ability to control his generally "wild stalion"-esque styles. Rest assured though, his ceiling is high, probably having the capability to be a first-round pick in the NBA Draft if he develops enough. Also keep in mind that he's an early enrollee at Tech, whose high school classmates are still thinking about what they're wearing to Prom. (And if things go south for Poole? He'll be replaced by another dribble-drive fiend, Travis Jorgenson, who may give Poole a run for his money anyways. Tech fans should rest easy when wondering about our standing at the point guard position following the departure of Udofia.)

Giving our four impressive freshmen (Georges-Hunt, Carter, Bolden, and Poole) another year of playing together along with Daniel Miller (who is continuing to develop as a very talented center), it's fair to expect good things from Brian Gregory's crew next year. I don't expect them to have such issues with field goal percentage (I think it's an issue of misfortune moreso than poor personnel) and expect to see the defense continue to improve. Next year is the year that this team turns a corner and develops into a tournament team. They'll have a high ceiling and will prove capable of knocking off most teams on any given night, although there may still be some inconsistencies. However, at the end of the day, I think this team proves dangerous enough to make the NCAA Tournament, and make it to the Sweet 16.

Now's the part where you tell me how stupid of a prediction that is. Ready, go!

Check out my other speculations!