We preview the Beesball season, which starts today at 4 vs. Akron at Russ Chandler Stadium. Come on in to discover which players to watch, team strategy, and more!

Welcome to the 2013 college baseball season! Its going to be a good 5 months (hopefully), as I will detail herein. Tech is going into its slate with high expectations as they come off an ACC championship in 2012 after they went 38-26 in the regular season. The pitching staff is back at full strength after being decimated by injury. We have two leftys available this year as opposed to zero last year. The lineup is also quite strong. The team returns 7 starting bats who hit a combined .300 last year and only loses one major contributor, Jake Davies. Coach Danny Hall returns for his 20th year as Yellow Jackets chieftain, and brings most of his staff back with him. The only new face, in fact, is pitching coach Jason Howell. Howell comes from UNC Wilmington and trained up the best pitching staff in their conference in 2012. He's hoping to have the same effect at Tech and here he's got plenty of young talent to work with. That said, let's take a closer look at the pitching staff.

Below you'll find the complete pitching staff for the 2013 season. Keep in mind that not all these guys will pitch or will only play pitcher, but I included everyone for completeness. 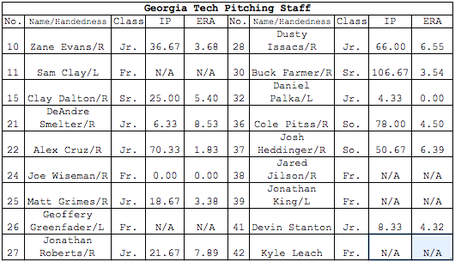 Of note: Junior Devin Stanton comes back after missing the lions share of last season with an injury. Stanton had Tommy John surgery, and is due back "the first part of March" according to Coach Hall. Also of note: Buck Farmer returns for his senior season. Farmer was the top man in the rotation last year, starting 16 games and going 8-4 in that span. Expect him to get the Friday slot in the rotation, followed by Dusty Issacs on Saturday and Cole Pitts on Sunday to round out the weekend. The midweek start gets a little murkier. Devin Stanton might get it once he's back at full strength, but there's a whole stable of guys in front of him that can pitch right now.<div class="non-primary" style="border: 1px solid #c2c2c2; margin: 0px 0px 10px 10px; padding: 5px; background-color: #dcdcdc; float: right; width: 175px; text-align: left;">

</div></div>Josh Heddinger will get the start for the first midweek game next Tuesday against Georgia State, but Coach Hall made it clear that its open season on the slot. The Jonathans (Roberts and King) are the two guys he pegged to look out for Tuesday-Thursday. Jonathan King is a special kid and may end up getting the rawhide. Selected by ESPN Scouting as Tennessee player of the year last year, he posted a .65 ERA while going 11-1 and boasted a 5.4 SO/BB ratio. With the rotation mostly set one might wonder where 2012 freak-of-nature Alex Cruz fits (1.83/8-3) into the pitching picture. Coach says he's going to be a setup guy, someone he'd like to use "three times a week as opposed to just once a week." Seeing as Cruz could hit the dust off a pinhead, he could be invaluable in sticky situations. Coach also specified that he wants to see Zane Evans on the mound closing out games as often as he can. There's some fluidity there between Cruz, Evans, King, and Dalton. However, I think Evans is going to be this team's Medlen.

Next up we come to the lineup. This is where things get real confounding, but in a good way. We've got 5 starting infielders for four spots ("too much talent" seems to be the theme of this preseason) and a bunch of different ways to hit them. We're not covering all of them here, but the projected lineup is below. 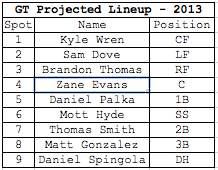 There's a lot of positional wiggle room here (Hyde can play SS or 2B, Dove can play 3B or LF, etc) but I think this is how the lineup will ultimately shake out. The DH is an easy split between Spingola and a few other guys, and Evans may be out occasionally so he can rest up for his closing duties. That's not problem though because Catcher is the Jacket's deepest position. Mitch Earnest, Connor Lynch, and A.J. Murray are ready to step in behind Evans to call the game. People are particularly excited about Murray, who owns many of his high school's batting records.<div class="non-primary" style="border: 1px solid #c2c2c2; margin: 0px 10px 10px 0px; padding: 5px; background-color: #dcdcdc; float: left; width: 240px; text-align: left;">

</div> The Sophomore developed a lot in the offseason and is expected to become a dangerous hitter in the cleanup spot or 3-hole. There's a lot of power like Murray in this group which slugged nearly .440 last season and went on 53 trips around the world. I can't see those numbers going down this season with the team returning all but one starter and another offseason of strength training under their belts. If disaster should arise, however, these guys showed last season they can play small ball too, so you don't have to completely rely on the power game for success.

The schedule is its usual brutal ACC self. GT faces Florida State and Miami on the road, as well as an improved Duke team. NC State, UVA, and UNC mercifully come to the Rusty C but that doesn't make them any worse as teams. For what its worth, Aaron Fitt of Baseball America has us getting through this rough schedule and hosting an NCAA regional. I'll cover the other ACC teams more in depth in my ACC previews, which will start next week. All in all, this should be a well-put-together team barring injury and should win 45+ games.