I have a rebuttal to AD Todd Stansbury's letter to alumni that's too long for a comment, plus it doesn't fit neatly into a comment thread. Ben or others, feel free to to repost this wherever you see fit.

I'm not sure what an AD in Stansbury's position is supposed to say right now, short of firing the coach which we know is too expensive. He has to point to some positives. However, my reaction to Stansbury's letter is that some of the arguments don't really hold water because we have data showing otherwise. Prior performance doesn't guarantee future results, but it is a very good indicator. Let's dive in.
PART 1: CLOSE LOSSES
The argument that Collins made throughout this season is that we're very close to becoming a winning program, since we had a possession to tie or win the 6 games. He said that those who don't see the closer losses as progress aren't looking for it. He also quoted Bobby Bowden on lose big, lose small, win small, win big. ADTS continued the same narrative in his letter. Claiming 6 games with a chance to win can be surmised from looking at scoring margin (as ADTS does), but that's a little too generous in my opinion.
I created a plot below showing the win probability according to ESPN at the start of the 4th quarter of each game. I chose the start of 4Q because the probability at the end of a loss is zero by ESPN's definition. The start of 4Q gives us an idea if we actually had a shot at winning (i.e. 50%) or if we just piled on points in garbage time (i.e. 10%) to put lipstick on a pig. That said, a comeback win is possible but it is improbable. A good example is the two late onside kicks and TDs against UVA. A relevant concept is Post-Game Win Expectancy. 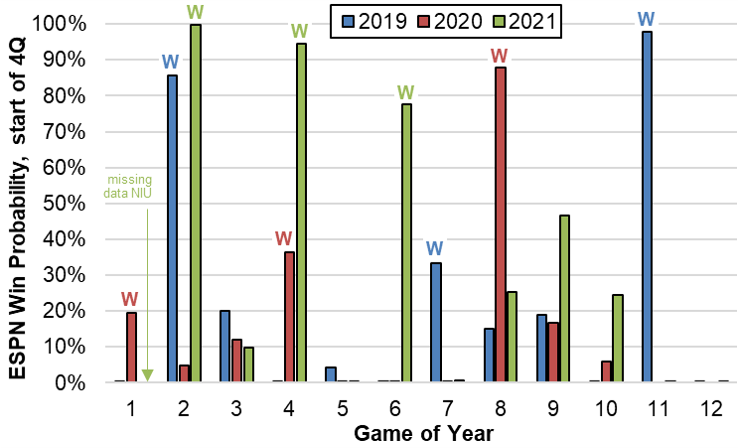 The plot shows us that all of Collin's seasons are bad (including some historically bad losses like Citadel, Temple, VT, Clemson, ND, and uga), so we're comparing different flavors of bad. I will grant to ADTS that the 2021 season had the closest losses of any of Collin's three seasons, as reflected by scoring margin and by statistical margin. But it's not that close, and certainly not "a few lucky bounces" away.
I don't have the data for NIU, but I can guess the win probability was at least 50% since we led 14-7 at the start of 4Q (I hate giving credit for that game). We can see that the Clemson and UVA games would have required a miracle to tie, let alone win. VT and BC were both 25%, so it wasn't particularly close, but maybe possible. Miami is a game we should have won because they kept handing us the ball, but we couldn't get out of our own way either.
Another point of interest is how many losses were sealed (<10%) by the 4th quarter. That's important because it relates to how entertaining GT is to watch on TV, both for fans and national audiences. In 2019 we had 6 <10% 4th quarters and in 2021 that went down to... 5. Color me impressed.
Verdict: They are correct that the final scoring margins were tighter in 6 losses. 4th quarter win probabilities are the best they've been under Collins, but it's a very small measure of progress, and even then it's only true for 2 (at best 4) of those 6 losses.
PART 2: COLLIER, PASTNER, AND COLLINS
Speaking of progress, the AD and Coach claim progress was apparent at many points during the season. All of FTRS knows that the defense regressed, which to me was the most frustrating part of the season. Then Stansbury had the gall to compare to Collier and Pastner, which to me was the most frustrating part of the letter. My reaction: 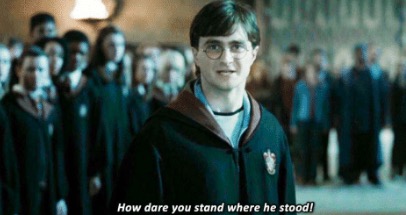 Yes, it took time for VB and MBB to return to the NCAAs, but comparing Collins to Collier and Pastner is invalid. Here's why:
Let's dive into the numbers. Winning percentage is in the plot below. You can see that neither Collier nor Pastner ever lost more games than their predecessor's two-year low. This is not true for Collins, who dragged us to the floor and kept us there. Remember, Collins is yet to eclipse CPJ's absolute worst season. I want to give a special nod to Michelle Collier who showed consistent improvement from year 1, to 2, to 3. That's exactly what you hope for from a coach. She had to rebuild the roster after 2017, and she did so in style, turning GT into a national contender. 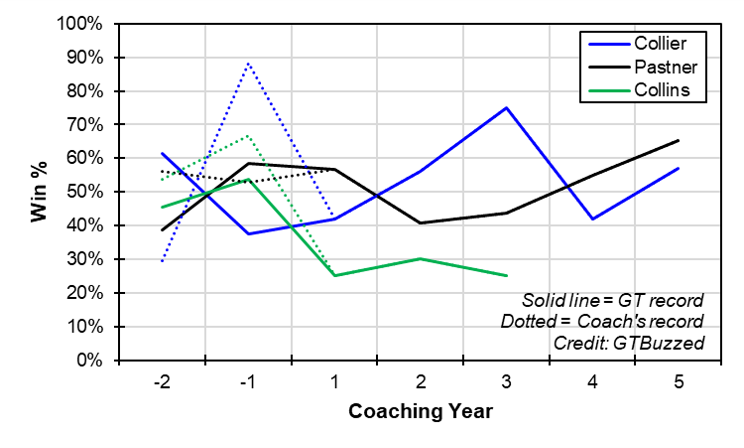 Winning % is the ultimate measure of success, but we can also learn about team performance from advanced stats which add corrections for close games, opponent strength, etc. Let's start with overall advanced stats percentile for VB, MBB and FB.
I believe that GT Athletics should regularly expect to be in the upper quartile (25%ile) of the sports it participates in, and certainly no worse than above average (50%). Pastner's first three years were statistically worse than Gregory's, but they weren't a total flop and he held the line at >34%. Collier showed improvement quickly and held the line >36%. Collins has turned in 3 bottom-quartile performances in a row. The underlying stats are arguably scarier than the overall record. 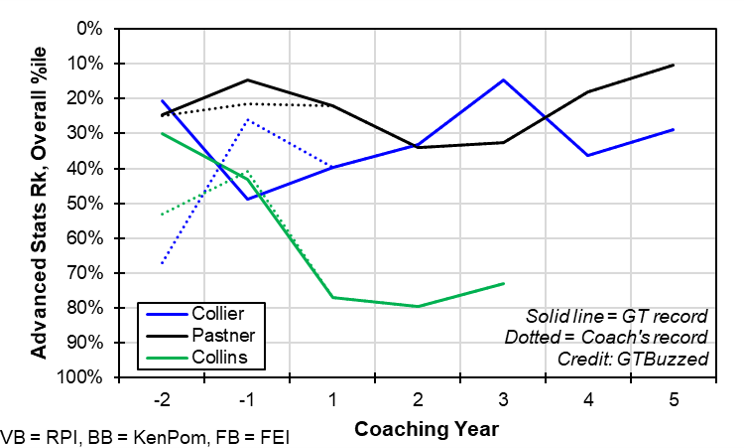 I also delved into offense and defense rankings for football and basketball, below. The narrative in Collins' hire was that we're trading an offensive savant (CPJ) for a defensive specialist. Stats show that statement is partially correct: we definitely traded an offensive savant (15-18%ile) for something... but that something isn't good. The offense tanked unsurprisingly because of the "historic rebuild". I still argue it shouldn't have fallen as far as it did. Also, I was surprised that Patenaude was canned before Thacker, since the offense actually improved 15%ile this year, while the defense regressed 15%ile.
Pastner on the other hand coached a truly elite defense in his first season (6th in KenPom, upper 2%ile). The offense tanked in Pastner's first year, but this is where you can truthfully use "historic rebuild" or "bare cupboard". The 2016-17 squad lost all of its seniors in MGH, Adam Smith, Nick Jacobs, and Charles Mitchell (52.3 PPG combined!). Pastner had to start almost from scratch. I am impressed by how much of a turnaround CJP managed with the 2021 offense. 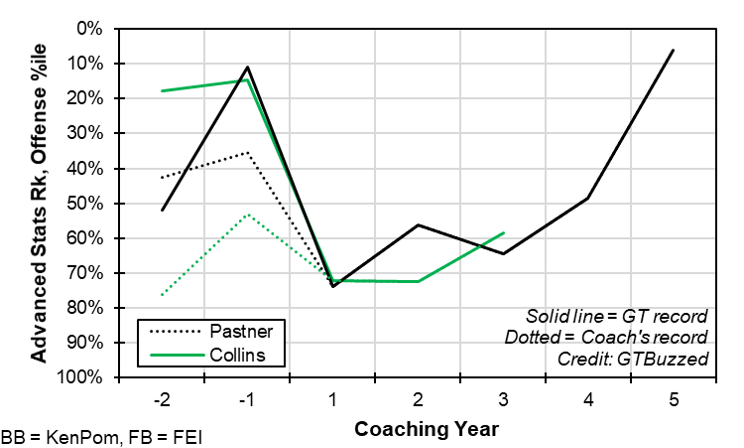 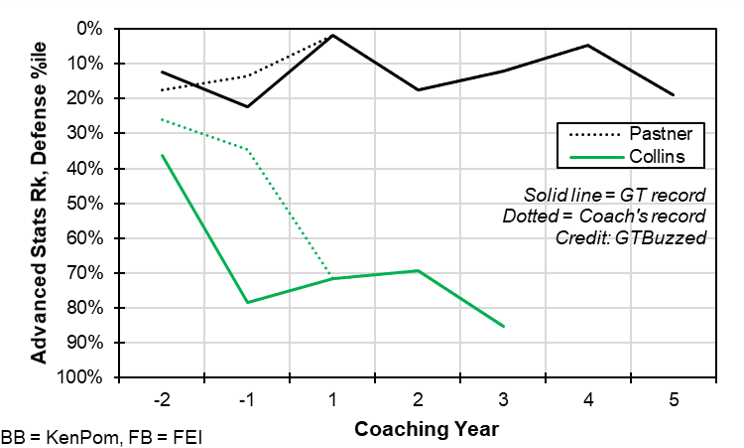 Verdict: Collins doesn't deserve to be in the same conversation as Collier and Pastner. They are better coaches across the board. The key is that Collier and Pastner showed progress in some areas (whether wins, statistics, offense, defense, or player development) while Collins has shown damn near nothing, unless you look with a microscope. Demanding patience 3 years into Collins by comparing to Collier and Pastner is downright offensive.
PART 3: STAFFING CHANGES
We're supposed to believe (or maybe hope) that Stansbury and Collins are replacing the worst parts of the staff, namely the secondary coaches and the OC, and thus the performance will improve. I'm willing to wait and see the OC hire. I worry about all the graduations from an already mediocre OL. However, I'm more concerned about the defense. I've been saying for weeks that Thacker, not Patenaude, should be fired. The stats above showed the offense progressing (despite two shutout losses!) while the defense regressed.
Collins was hired as a defensive-minded coach. Maybe the theory of retaining Thacker is that Collins will take over defensive coaching. Collins's defenses at Mississippi State and Florida were top-tier, and at Temple they were OK, so we can conclude that Collins can run a defense at a high level. My problem with that statement is that Florida's defense is expected to be pretty good as a baseline anyway, so can we really conclude that Collins elevated his defenses and is a defensive specialist?
The plot below show the FEI ranking of the defense at each of Collins's stints, both in the two years prior and two years during (coincidentally he was at Miss. State DC, UF DC, and Temple HC 2 years each). There is no major change at any of the schools where he previously coached. The variation looks like noise more than anything else. Mississippi State is the closest you can describe as a positive turnaround. To his credit, there was no major drop-off that occurred at any of his past three stops. The biggest drop occurred in 2021, year 3 of Collin's GT tenure. 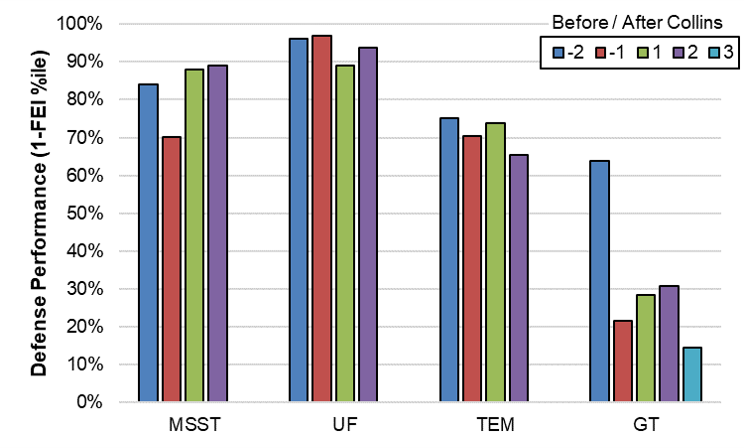 Verdict: I am skeptical of a significant defensive turnaround if we don't hire a new DC. Collins showed that he could maintain high level defenses at previous stops, but I did not see evidence of any big improvement. I also think Thacker needs to be as far from the program as possible, and I'm surprised he wasn't fired after this year's regression.
SUMMARY
I understand why the Athletic Department didn't fire Collins. We simply cannot afford it. In that light, I also understand why Stansbury needs to make statements supporting the current coach. However, I don't appreciate being BSed. Measuring progress by being close in fourth quarters is only partially correct, and it's very small progress at that. Comparing to Collier and Pastner is invalid because they actually demonstrated results within three years. And the staff shakeup did not address the worst offender (in my opinion), and it seems too small to matter.
I want Georgia Tech and our student athletes to be successful, therefore I want Collins to succeed. I'm not rooting against him. But the sooner we start acknowledging the reality and gravity of the problems, the sooner we can fix them, instead of continually BSing our way through.