...but his teams consistently punched above their NFL draft weight!

Here is a table listing number of players drafted by the NFL over the last 25 years, along with a crude estimate of the expected win% given than talent level, the actual win%, and the difference expressed in terms of games per season: 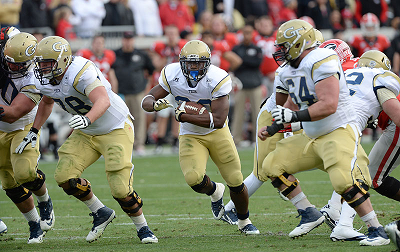 Here's how you read this table:At the top is Georgia Tech, who had 49 NFL draft picks over the last 25 years. You would expect a team with just under 2 NFL players per season to win about 38.3% of its games - but somehow [ahem, triple-option] managed to win 56.4% of them instead - or +2.2 wins more than you'd expect a team with that level of talent to win. No surprise that Duke and Wake also overachieve because, hey, they just don't get a lot of NFL players!