Welcome back to Casual Friday, a column you find on no particular schedule on any given Friday, if we ever really have an idea for something fun to say.

As a reformed marching band guy, I have a special appreciation for a football halftime. One of the very best parts of ESPN’s massive college football playoff coverage is that they just leave the skycam on during halftime and you can actually watch the band. But really, what’s the point here, especially now that we’re deep into basketball season?

If you weren’t at McCamish Pavilion Wednesday night for the Thrillerdome After Dark game, a solid promotion in its own right, and haven’t been on Twitter much lately, you probably missed a certain part of the halftime performance. The idea was that, since there was a whole “silent DJ” theme going on, they’d stick a couple students out at center court and have them play musical chairs.

Perhaps the most controversial play this writer has ever seen live went down during the men’s basketball halftime this week. Ironic as though that may be, I cannot say that I’d ever thought I’d ever be able to reconcile it in my head: who is the real winner here? Is it the guy in navy, who appears to have come to rest in the seat, with appears being the key term here, or the guy in gold, who makes a, err, football move on the play before he was down. The tweet from Georgia Tech Athletics is helpful, because they have the super-slow motion replay. The problem is, though, that the angle really isn’t that satisfying - the chair is in motion, the guy is in motion, who’s to say what’s going on?

For help, I turned to the NFL’s pass completion rule.

COMPLETED OR INTERCEPTED PASS:
A player who makes a catch may advance the ball. A forward pass is complete (by the offense) or intercepted (by the defense) in the field of play, at the sideline, or in the end zone if a player, who is inbounds:
a. secures control of the ball in his hands or arms prior to the ball touching the ground; and
b. touches the ground inbounds with both feet or with any part of his body other than his hands; and
c. after (a) and (b) have been fulfilled, performs any act common to the game (e.g., tuck the ball away, extend it forward, take an additional step, turn upfield, or avoid or ward off an opponent), or he maintains control of the ball long enough to do so.
Notes: Movement of the ball does not automatically result in loss of control. If a player, who satisfied (a) and (b), but has not satisfied (c), contacts the ground and loses control of the ball, it is an incomplete pass if the ball hits the ground before he regains control, or if he regains control out of bounds. A receiver is considered a player in a defenseless posture (See 12-2-7) throughout the entire process of the catch and until the player is capable of avoiding or warding off the impending contact of an opponent. If a pass is caught simultaneously by two eligible opponents, and both players retain it, the ball belongs to the passers. It is not a simultaneous catch if a player gains control first and an opponent subsequently gains joint control. If the ball is muffed after simultaneous touching by two such players, all the players of the passing team become eligible to catch the loose ball. If a player, who is in possession of the ball, is held up and carried out of bounds by an opponent before both feet or any part of his body other than his hands touches the ground inbounds, it is a completed or intercepted pass. It is not necessary for the player to maintain control of the ball when he lands out of bounds.

INCOMPLETE PASS:
Any forward pass (legal or illegal) is incomplete and the ball is dead immediately if the pass strikes the ground or goes out of bounds. An incomplete pass is a loss of down, and the ball returns to the previous spot.
Note: If there is any question whether a forward pass is complete, intercepted, or incomplete, it is to be ruled incomplete.

I think the most important thing to keep in mind here is the last note: if there is any question, it is to be ruled incomplete. In this case, I take that to mean that, if the a) player has not come to rest in the chair, b) the chair is not in motion, and c) there is no indisputable video evidence proving otherwise, the play must still be live. Thus, we must investigate. Was the chair in motion? Was the player at rest in the chair? I never thought I would be able to find irrefutable video evidence proving one way or the other, that is, until I got my hands on another angle.

Since Chorus won’t let me upload videos, I turned it into a GIF of questionable image quality. I think it gives us that the proof we need to decide for certain whether this play was legal or not. Let’s go frame by frame:

In the first frame, the chair is still at rest, and he’s not in the seat. Per the rules we just made up, the play is not over. The second to third frames, though deserve to be seen back to back: 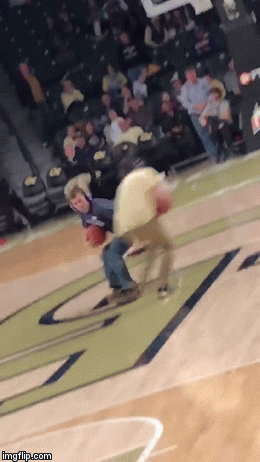 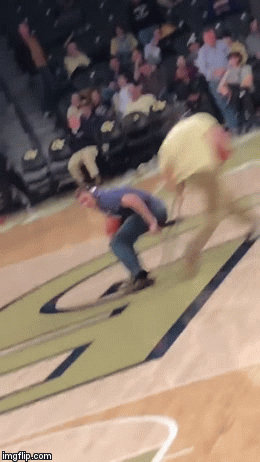 The image slider here comes in handy, because even though the man lands into the chair, the chair also goes into motion. I think this is the evidence we need to conclusively prove the chair was in motion, and therefore the play wasn’t dead.

Based on the standards we just made up, the ruling seems to be that the play stands as called. The most controversial game of musical chairs, perhaps ever, ends rather anticlimactically. It was an impressive move, no doubt, but, more than anything, a surprisingly deft move in a halftime game for a prize pack. At the very least, it’s entertaining. And I guess that’s the whole point anyways.

Disagree? Leave it in the comments below.