An in-house fix very well could be the way to go for Georgia Tech’s defense.

Though promoting an existing assistant to defensive coordinator in the wake of the turbulent Ted Roof era may not seem like the best idea at the surface level, my objective for the day is to persuade you that Georgia Tech safeties coach Andy McCollum is a qualified and viable option to become Paul Johnson’s fourth defensive play caller in just under a decade. A veteran member of the coaching staff who has been working at the FBS level for decades, McCollum is a savvy recruiter with play calling experience and success at numerous stops over the course of his career. Let’s take a look at what he’d bring to the table for the Jackets in an elevated role.

McCollum came to the Flats back in 2010 to coach Tech’s defensive line, a position he held for two years before being handed the coaching responsibilities for the team’s linebackers in 2012 in addition to his defensive line duties. His role changed once again in 2013, when he was allowed to focus on the linebackers after Mike Pelton was hired to coach the defensive line, and then again in 2015 when he was named the safeties coach. Prior to arriving at Tech, McCollum was an assistant at Baylor from 1994-1998 and oversaw Middle Tennessee State’s transition to the FBS as head coach of the Blue Raiders from 1999-2005. His only stint as a defensive coordinator came during his days at Baylor, where he served in the role from 1995-1996.

Advanced stats are hard to come by from the 1990’s, but McCollum’s Baylor defense allowed just 15.1 points per game in 1995 before spiking to 29 points per game in 1996. His Middle Tennessee defenses trended the other way, giving up robust point totals early on before finishing ninth nationally in total defense prior to his firing in 2005.

McCollum ran a 4-3 defense during his time in Waco, a similar formation to Ted Roof’s 4-2-5 scheme but with an additional linebacker and one fewer defensive back. The majority of Tech’s defensive talent is still in the secondary, but the development of Bruce Jordan-Swilling, the return of Brant Mitchell, and the addition of talented linebackers Justice Dingle and JaQuez Jackson could help the team ease into the 4-3 scheme more seamlessly. 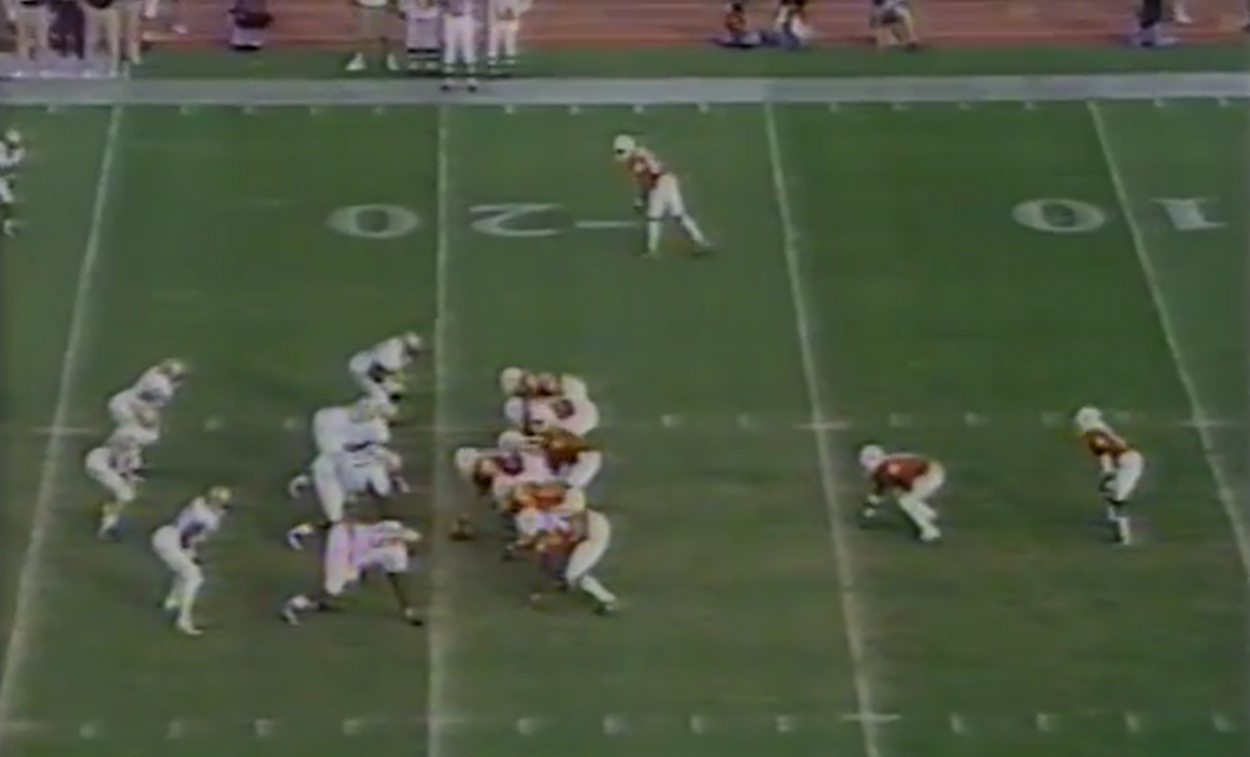 The slider above shows the difference between Ted Roof’s 4-2-5 (on the left, vs. Virginia Tech in 2017) and Andy McCollum’s 4-3 (vs. Texas in 1996). Whether or not you think Tech has the personnel for a 4-3 scheme depends on how confident you are in the linebacking group, which would have in increased role compared to years past, and whether or not you think that the defensive line can finally be disruptive enough to make up for the loss of a defensive back. Of course, plenty has changed since 1996 when McCollum last called plays. He may well decide to play to the strengths of the roster rather than sticking to his guns, but we won’t know for sure unless he gets the job.

This is where Andy McCollum pulls away from the pack — he is the hands down the best recruiter on the coaching staff. Consider this: Georgia Tech has three four-star recruits for the cycle in Justice Dingle, Jaylon King, and James Graham, and McCollum is responsible for all three of them. In fact, the work he’s done since arriving at Tech has been staggering. He also brought on Vad Lee, once a highly-touted recruit, and has had some incredible hits on lower-rated prospects in the form of P.J. Davis and Kenny Cooper among others. Other keys finds include the Austin twins, Qua Searcy, Brant Mitchell, Brandon Adams, and KirVonte Benson.

His recruiting prowess dates back to his time at Middle Tennessee State, as his Blue Raider teams routinely finished in the top tier of recruiting classes in the Sun Belt. Suffice it to say that the current Tech roster would look more than a little bit different without his recruiting efforts.

If Andy McCollum isn’t promoted to defensive coordinator, he at least better receive a raise and contract extension to ensure that his talents stay in Atlanta. His units regularly perform better than most dating back to his hiring, be it the safeties, linebackers, or defensive linemen, and he has proven time and time again to be a solid coach. Promoting from within after an ugly end to the Roof era wouldn’t be the sexy thing to do, but there’s no question that Andy McCollum would be a strong replacement who could get the defense back on track while maintaining strong recruiting numbers.