Duff’d It! Rankings and Other Accolades: We Built this City on Bad Football

THE DUFF’D IT! RANKINGS ARE BACK AND ARE HERE TO TELL YOU THE SEC IS BOOTY

Share All sharing options for: Duff’d It! Rankings and Other Accolades: We Built this City on Bad Football

DON’T YOU DARE BE SOUR

CLAP FOR YOUR AWARD WINNING DUFF’D IT! RANKINGS

5. Northwestern. Western Michigan coach P.J. Fleck now owns Chicago, and by extension the Chicago River and at least part of Lake Michigan, and you best believe he’s rowing the boat all the way back to Kalamazoo proclaiming victory over you, Wildcats. (Yes, he is rowing the boat across the land parts on the way back, too.)

4. Notre Dame. You may have bested the Irish in riveting fashion, Charlie Strong, but this win combined with OU’s loss to Houston has doomed you to losing this year’s Red River Rivalry. I hope you can live with that!

3. USC. “PAWWWWWWL THIS IS ABSURD THE ALABAMA CRIMSON TIDE DO NOT TRAVEL THREE STATES AWAY TO PLAY THE TROY TROJANS THEY AIN’T EVEN OUR LITTLE BROTHER THEY’RE AN ADOPTED STEPCHILD AND - wait, what? Those were the USC Trojans? From California? Huh.”

2. Oklahoma. Mighty kind of you to welcome future conference mate Houston to the Big 12 like that, Sooners. What better housewarming gift can you give than a kick six? And, I mean, you are going to invite Houston, right, Big 12? You know, unless you scurred.

1. The SEC. After losses to South Alabama and Southern Miss; capitulations to Wisconsin, Clemson, and West Virginia; barely-wins over Appalachian State and Louisiana Tech; and whatever the hell South Carolina-Vandy was, one thing is clear: the SEC is trash. The SEC should go back to doing what they do best: holding up Alabama as the standard bearer and pretending all these other things that are on fire are juuuust fine, nope, you’re imagining those fires. Don’t be like the SEC, kids. Eat your Booty-Os. Booty-Os: They make sure you ain’t booty!™

You all lost to FCS teams and that’s very sad: Virginia, who were bested by the Richmond Spiders from across the state. At least coach Bronco Mendenhall will lead the conference in fistfights, Cavs. You should probably avoid Spiders in the future anyway; they’re creepy. Wazzu, vanquished by Eastern Washington, another FCS powerhouse FBS schools should really stop scheduling. The Blood Field needed a sacrifice and y’all were too dumb to examine that flyer more closely before calling the number, Cougs. Iowa State, who lost to Northern Iowa. We’re neither mad, nor disappointed, or even surprised, Cyclones. And Buffalo, who finally make their Duff’d It! Rankings debut for losing to Albany. Congratulations to all! Money well spent, I’m sure.

NO DALVIN COOK WHY RED LIGHTNING DIDN’T DIE FOR THIS

This play was made possible by a Larry Fedora rage-out and an incredibly playcall from the Tar Heels. That’s a full team effort, right there.

We’ll get to the Employee of the Month of the Week in a moment, but first, our newest segment....

You may remember Christian McCaffrey from last year as “Stanford guy who does everything and maliciously stomps on Iowa Hawkeye dreams”. He is still playing football at the collegiate level, much to the dismay of every team who has to play him this year. We at the Duff’d It! committee will be monitoring his stats all season long, or at least until the weekly mentions in this column curse him into tearing his ACL in week 6.*

This week? 22 rushes for 126 yards and two touchdowns and 7 catches for another 40 yards, as well as a kick return for 28 yards and two punt returns for 16 yards, in a quiet 26-13 victory over Kansas State. We won’t even remember this game, at least until the Internet sees the kindly postgame letter Bill Snyder has written to McCaffrey.

*We are preemptively claiming immunity should this actually come to pass, BTW 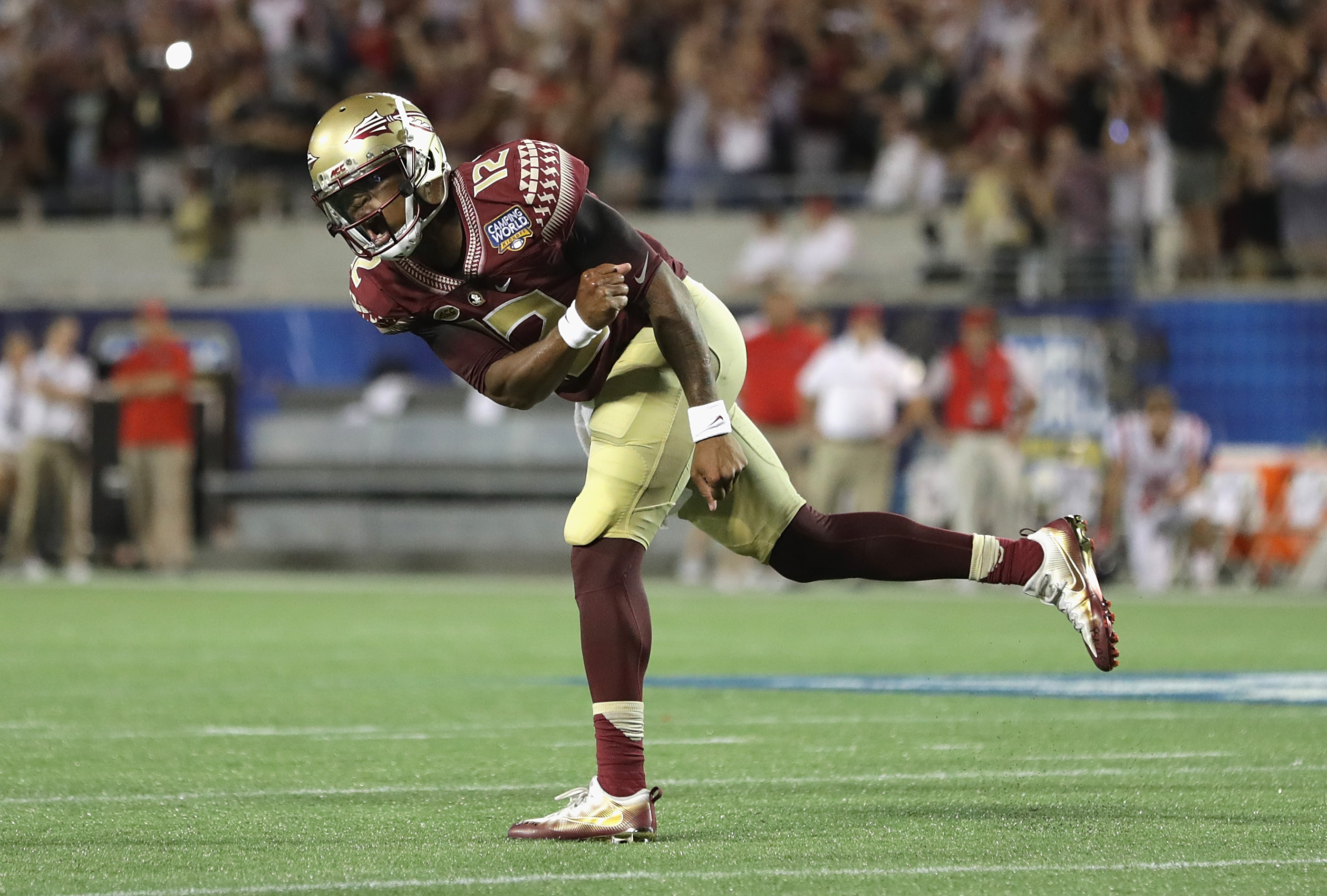 *sigh* Yes, we’re talkin’ ‘bout the Noles again, and it’s the good, second-half Noles, not the trash-ass, sucky, first-half Noles. Francois passed for 419 yards and two touchdowns on a 33 for 52 performance, adding 9 rushes for 59 yards, and he did all that against a pretty good Ole Miss team, in his first ever college football game! A freshman FSU quarterback with a stunning performance in his very first game? This is unprecedented!

So congratulations, Deondre Francois! Surely you shall reach the rarefied air all the greatest Seminole quarterbacks have known and look I did what you asked #FSUtwitter now let my family go you promised you’d let them go