Duff'd It! Rankings and Other Accolades: We Swear Your Check is in the Mail, South Dakota State

FAIL TO THE KINGS, BABY!

Share All sharing options for: Duff'd It! Rankings and Other Accolades: We Swear Your Check is in the Mail, South Dakota State

September has arrived. The subtle changes in the weather and the return of college students to their campuses signals the return of that which you have awaited for so long.

No, not college football. I'm talking about the Duff'd It! Rankings.

5. Stanford. The Cardinal put up six whole points against the mighty Wildcats of Northwestern, dashing the champion hopes of at least one person. But here's the thing, Northwestern: y'all think you won the nerd bowl, don't ya? Well, I didn't see you at Dragon Con this weekend. Those six points allowed didn't get you in line to see Felicia Day, huh?

4. Nebraska. The bad news, Cornhuskers, is y'all lost to BYU on a Hail Mary pass, which means it probably really was divinely inspired. The good news is this resulted in hugs for everyone! Don't worry, celebrating a victory in this manner is definitely not prohibited by the BYU code of honor.... oh, it is? It is. Sorry.

3. Colorado. You have to feel bad for the Pac-12, always getting dogged by their big brothers in the Mountain West. Colorado was so close to notching a rare win for the Pac-12 in this conference vs. conference rivalry, but unfortunately for the Buffaloes, this game kicked off at 8pm Hawaii time, which could only mean one thing: Pac-12 refs after dark!

2. Penn State. You've committed the worst of all football crimes, Penn State: giving Philadelphia a football moment to be proud of. After losing to Temple, the Nittany Lions reacted calmly and rationally by.... I'm just kidding; they buried the game tape. Which one of y'all wants to tell them about YouTube, flash drives, and other forms of modern technology we have for saving and storing video footage?

1. Texas. Well, Longhorns, you accrued a grand total of three points and 163 yards against Notre Dame. That's not good! But at least you held the Irish to…. 537 yards and 38 points. Okay, that's not good either. But don't worry! Charlie Strong has fired his offensive coordinator after just one week, a move that is a definite recipe for success!

Honorable mention: Kansas. There were plenty of FCS victories over FBS opponents this weekend - Fordham beat Army because they don't respect the troops, and North Dakota beat Wyoming because the Fighting Unnameds will take a victory over Craig Bohl any way they can - but South Dakota State over Kansas was the easy call here. This matchup wasn't even fair from the beginning. For Kansas, I mean. They have fewer players on scholarship than their FCS foe did. Seriously, Jayhawks, the Jackrabbits should be paying you to come play in Vermillion Brookings. Y'all need all the help you can get to help finish paying off Charlie Weis's buyout.

[Correction: South Dakota State is located in Brookings, SD. The University of South Dakota is in Vermillion. Many thanks to Twitter user @MitchKeller, your authority on all things Dakota.]

Growing up, little Jimmy dreamed of playing football. More than anything in the world, he wanted to play for his beloved Southern Miss Eagles. And here he was, on the field, setting up a crucial block for Nick Mullens!

And then he ran into Mississippi State's A.J. Jefferson.

"No, you don't understand! My shoe fell off! I need this shoe to live! Please, I just need a few seconds to- hnnnnng" 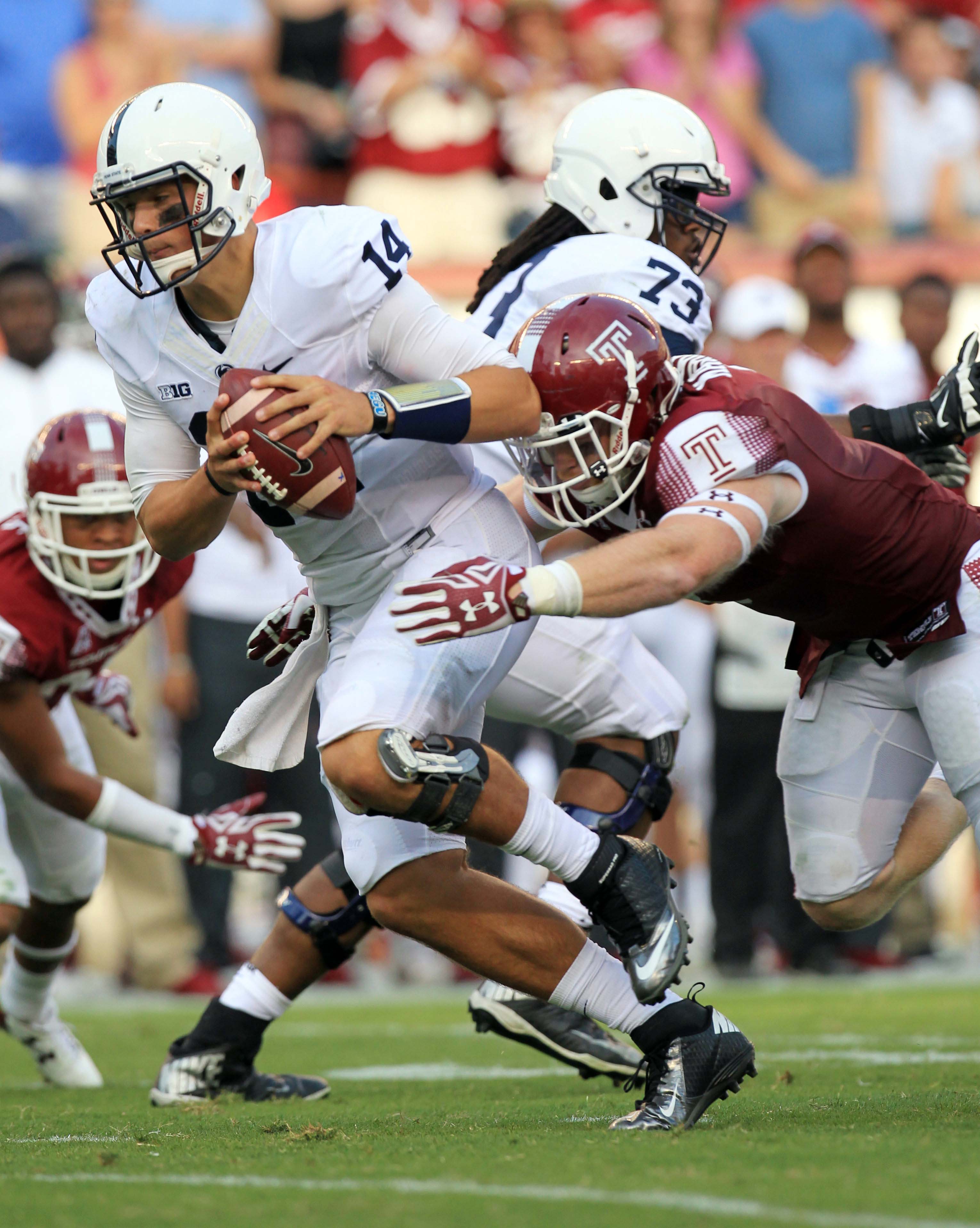 Tyler Matakevich, the man who put the "sack" in "Sackenberg"! Matakevich had three of them on the day, plus four more tackles to earn AAC defensive player of the week and the even more prestigious FTRS EotMotW awards!

So, congratulations, Tyler Matakevich! In your honor, the city of Philadelphia is erecting a statue of you right next to the one of Rocky. No, it doesn't look much like you. I don't know if it's because it would be an NCAA violation or because Philadelphia hired the cheapest guy they could find.