Duff'd It! Rankings and Other Accolades: It's that old familiar feeling

YOU ALL KNOW EXACTLY WHERE THIS IS GOING

Share All sharing options for: Duff'd It! Rankings and Other Accolades: It's that old familiar feeling

And now our offense leaves me weeping

Within the sound of silence

4. Virginia Tech. The Hokies lost to East Carolina for the second year in a row, putting them in a huge hole to start ACC play. And now they've lost superstar DB Kendall Fuller for the year. You guys remember the Techmo Bowl? You know, the game that usually decides the ACC Coastal? It's going to be unspeakably awful this year.

3. Oregon. You know, in hindsight, maybe giving up 28 points to Georgia State last week was a warning sign, Oregon. I really don't think playing them prepared you at all for Utah. Not at all. Not even a little bit.

2. Tennessee. Take another shot of your terrible whiskey and sob into your portrait of Phil Fulmer for another night, Vols. Your losing streak to Florida has now stretched to 11. And you were so close! All you had to do was not let Florida convert a 4th-and-11 with 1:26 remaining. And then also not let them score on that same play. It was so simple! You can't beat Florida now, Vols. It defines you. It is a part of your being. You are the Tennessee Volunteers Who Always Lose to Florida.

I JUST HAVE A COUPLE MINOR COMPLAINTS

Honorable mention: Purdue. After beating the Boilermakers, Bowling Green is 2-0 against the Big Ten and 0-2 against teams not in the Big Ten, which might be the most Big Ten thing ever. Pack your bags, Purdue! The Falcons are moving in.

Okay, I know my quarterback is trying to talk to me, and I really should be paying attention to him, but I keep seeing things.

Like, was that the ball? This game is weird, man. I knew i should have held off on that cough syrup until after the game.

I really think that was the ball, though. Woah, my hands feel really floaty. Is that rain or snow?

Hey, wait, my guy's up there. I better move up so I can cover him. I don't want to mess this up and let them score here. 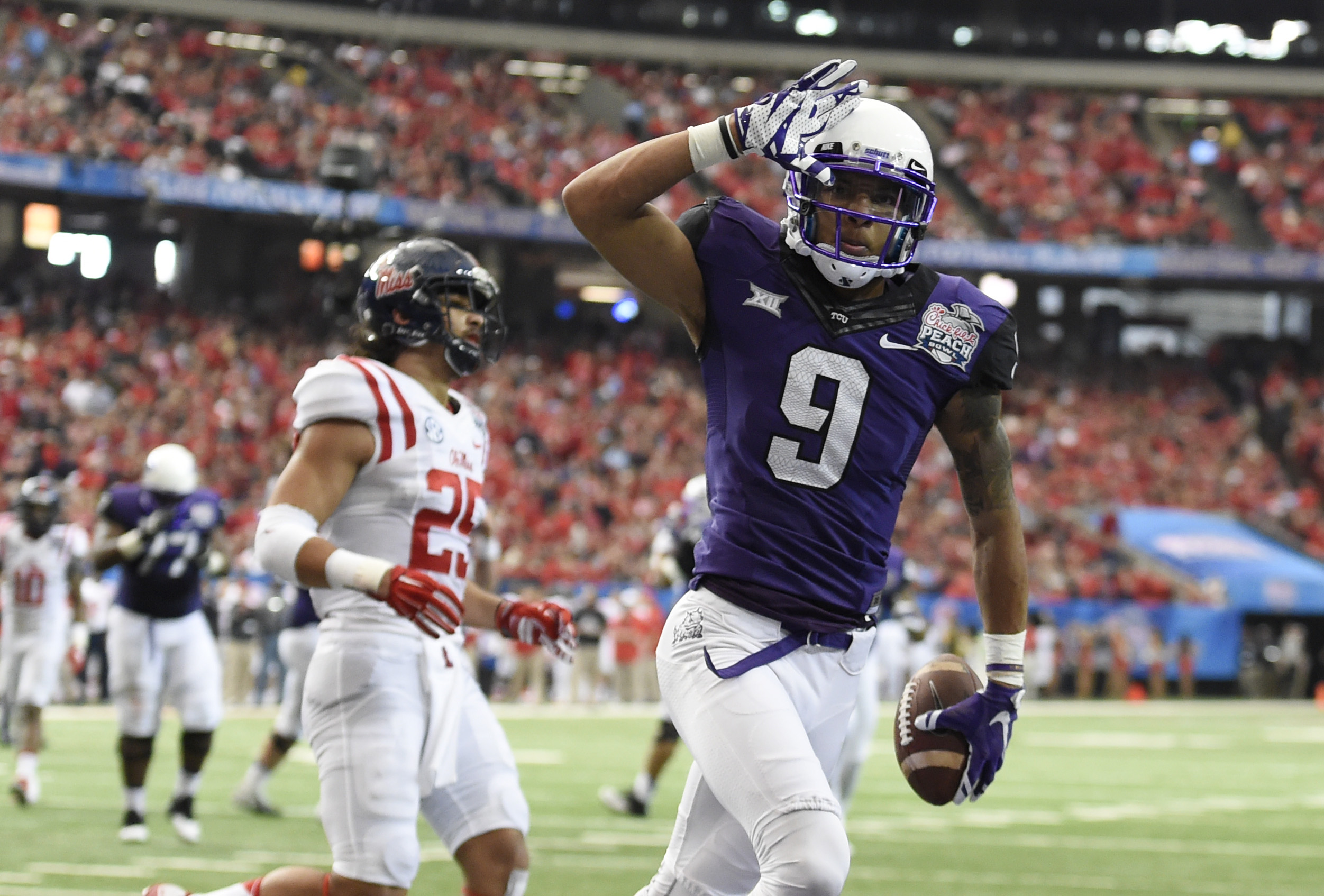 This was going to go to Cincinnati's Hayden Moore, who threw for 557 yards and four touchdowns in a little more than three quarters of a game after having to step in for Gunner Kiel. But then he went and did this, which lost Cincy the game, so so much for that!

Fortunately, there were players this weekend who didn't cap off an epic performance by getting pantsed, and no one kept their pants on better than TCU's Josh Doctson, who caught 18 passes for 267 yards and three touchdowns in TCU's wild win over Texas Tech, and tipped a high pass from Trevone Boykin into the hands of teammate Aaron Green for the winner in an incredible act of anti-pantsing.

So congratulations, Josh Doctson! The EotMotW championship belt is yours for the week! It's not any good at actually keeping your pants up, but you do have to defeat previous winner Leonard Fournette in a steel cage match to claim it. Good luck!