Duff'd It! Rankings and Other Accolades: Riding the Hog Express to Hell

THE DUFF'D IT! RANKINGS BRING GOOD TIDINGS TO EVERYONE, UNLESS YOU'RE BRET BIELEMA

Share All sharing options for: Duff'd It! Rankings and Other Accolades: Riding the Hog Express to Hell

Thank whatever gods you worship week 2 is over. With all the high profile kickoff games being played in week 1 these days, week 2 can tend to get a bit assy. (Look back at last week's picks if you don't believe me.)

Fortunately, though not always full on hype, college football never fails to deliver on derp. Even with a Saturday full of power 5 schools playing FCS and bad G5 schools, there was more than enough Duff'ing to go around.

At opposite ends of regulation, Tennessee kicked a field goal at 4th and goal from the one, and took a knee to go to overtime rather than pretend to try for the win. The Vols played like winning was too risky to even attempt, and the Sooners were more than happy to take that win while leaving Tennessee to twiddle their thumbs.

Congratulations must go out to Oklahoma, of course, Thanks to your victory, it has been determined Boomer Sooner and not Rocky Top will be the song that ushers humanity into the apocalypse.

4. Virginia. Nothing good in this world can last, Cavaliers. You've scheduled very strongly out of conference and have paid dearly for it, because you are not good at football. But last Saturday, you'd finally won one! You'd beaten Notre Dame! It was time to celebrate!

3. Louisville. In an alternate universe, Louisville loses this annual matchup with Houston, as they are conference mates in the American conference. In our universe, it's just the Cardinals having the first of what will be many, many #goacc moments. Which scenario is more depressing for Louisville? I'll let YOU decide!

2. Maryland. Sure, Terrapins, slow and steady wins the race, but too slow and a sharp eyed Falcon will spot you, pick you up, and drop you off a cliff so they can break your shell and feast on your insides. It's a really smart move by the B1G to stop scheduling FCS teams starting next year. They can stop getting kicked around by North Dakota State and instead enjoy more blowout losses to MAC teams.

(And for the millionth time, B1G, Maryland's your problem forever now. NO TAKE-BACKSIES.)

LET'S HAVE A TALK BERT

GRIPING ABOUT ANOTHER TEAM IN ANOTHER CONFERENCE'S SCHEDULE AIN'T SMART BERT

THAT SOUND YOU'RE HEARING IS A LASER GUIDED ROCKET HEADED STRAIGHT FOR YOUR ASS, BERT, AND IT HAS "#KARMA" STAMPED ON THE SIDE.

Honorable mention: the entire MWC. Here lies a memorial the brave and honorable mountain men of the west. Ten of them struck out on a quest to fell mighty foes across the land; all ten fought valiantly but died in their attempts. Some, like Hawaii, fought futilely against the largest Goliaths. Others, like Boise State, were victims of their own hubris. One might say the Broncos' loss to BYU was divine intervention.

The Mountain West is survived by the Air Force, the only team not to lose this weekend. Probably because they were playing a conference game against San Jose State, and I'm pretty sure ties don't exist anymore, even in the Rockies.

HOLD ON, DON'T THINK YOU CAN JUST SLINK OUT OF THE ROOM UNNOTICED: Auburn. You saw we'd gotten past the honorable mention and thought you were home free, didn't ya? Maybe you thought not losing always got you a pass.

Ohhhhh no. No. You're not getting off that easy. "But that's not fair! We won!" you protest. "We are in the mighty SEC West! WE WILL NOT BE TREATED IN THIS MANN-"

Nah. Don't wanna hear it. Saturday is the day the mighty SEC West lost to Toledo and went to overtime versus Jacksonville State. Can't "S-E-C" your way out of that one, Tigers.

NO, I'M BUSY TRYING TO CATCH THIS FOOTBALL

"I'M HAVING A PIGGYBACK RIDE WHETHER YOU LIKE IT OR NOT" 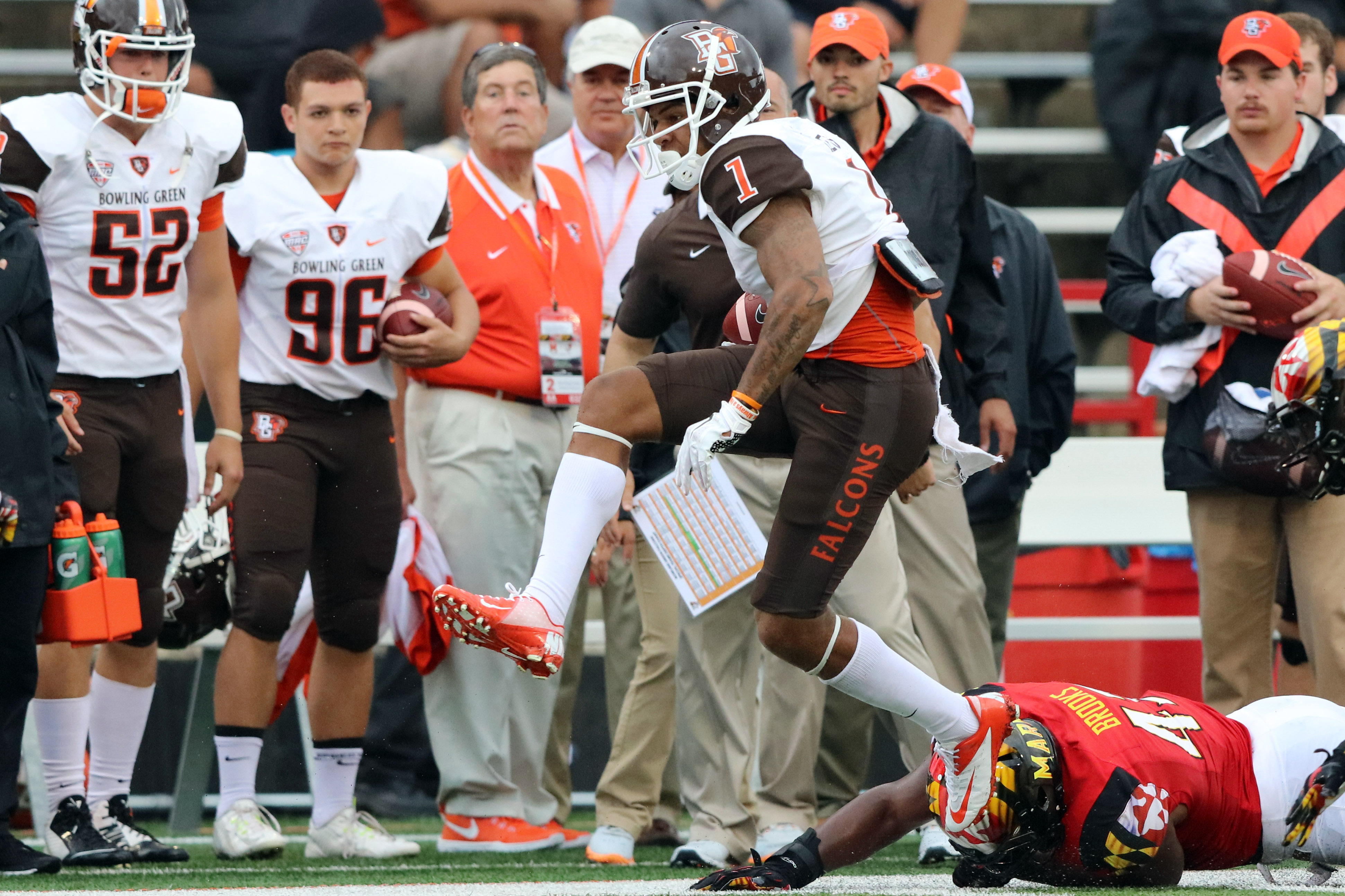 MACtion is back, baby, and fast MACtion will beat slow B1Gness every time. The Falcons rolled up 691 yards and 7 touchdowns on the Terrapins, with Lewis racking up 200 and 2 of each, respectively, on 15 total catches. MACtion is a beautiful thing, and continues to be the reason we clear our Tuesday evening plans in the fall.

So congratulations, Roger Lewis! You've won the Week 2 EotMotW award and the pride of Ohio! Okay, maybe, like, 3rd pride. Ohio State still exists, and Toledo did take down an SEC West team. But still. Third is good!