Duff'd It! Rankings and Other Accolades: Going Out With a Fizzle, as Expected

Share All sharing options for: Duff'd It! Rankings and Other Accolades: Going Out With a Fizzle, as Expected

Championship weekend has come and gone, and sadly, unlike last year's slate, most of the championship games were actually pretty good. Except for one, but we'll get to that. We're madder about this than Dabo Swinney after watching his punter run an unauthorized punt on 4th and 15.

As the Duff'd It council bids the 2015 college football regular season farewell, it's easy and understandable to feel a bit sad. But fret not. For the potential for duffing it isn't confined to college football. It's inside each and every one of us. And, failing that, the Jaguars are still playing for, like, an entire month. Imagine the possibilities!

3. Florida. When it comes to conference championship games, most teams aren't just "happy to be here", but Florida definitely was. And really, isn't that all you'd want knowing today is the day you're going to be smothered by Alabama. The good news for the Gators is they did manage to cover the spread of 17 points! The bad news is it was because Alabama had stopped caring at that point, allowing the Gators to pile up 99 yards and a touchdown in the final six minutes. (They finished with 180 yards. Total. The entire day. Those 99 yards were absolute dominance compared to the previous 54 minutes.)

2. Georgia Southern. As expected, one GSU beat another 34-7 in Statesboro on Saturday. Oh, wait, you were expecting 20 point favorite Georgia Southern to win, weren't you? You might want to sit down for this.

Yes, that's right, not only did Georgia State - a team that lost to Liberty on its homecoming - spring the upset over their rivals to the east, they absolutely flattened them. At 0-2, that puts the school that's just GS and not GSU at the bottom of the Georgia state football standings. Yes, below Georgia Tech. Congratulations, Eagles!

1. Baylor. Finally, Baylor's season-ending death spiral has crashed to the ground. Starting a third string quarterback and then being forced to literally play the wildcat by placing a wide receiver named Lynx at the position put the Bears in a 20-0 halftime hole against plucky little brother Texas, a hole from which Baylor could not recover. And everyone knows once you lose to Texas your season is over. Oh, and this loss cost the Bears a slot in the Sugar Bowl.

This year's Big Ten championship was on its way to finally erasing the 2006 ACC championship from the history books. Too bad they had to ruin it all by having an exciting ending.

"Hey, why are the guys on the other side in white? I thought we were the away team. And why are all my teammates wearing green? And why do we have the ball? I have no idea what's going anymore." 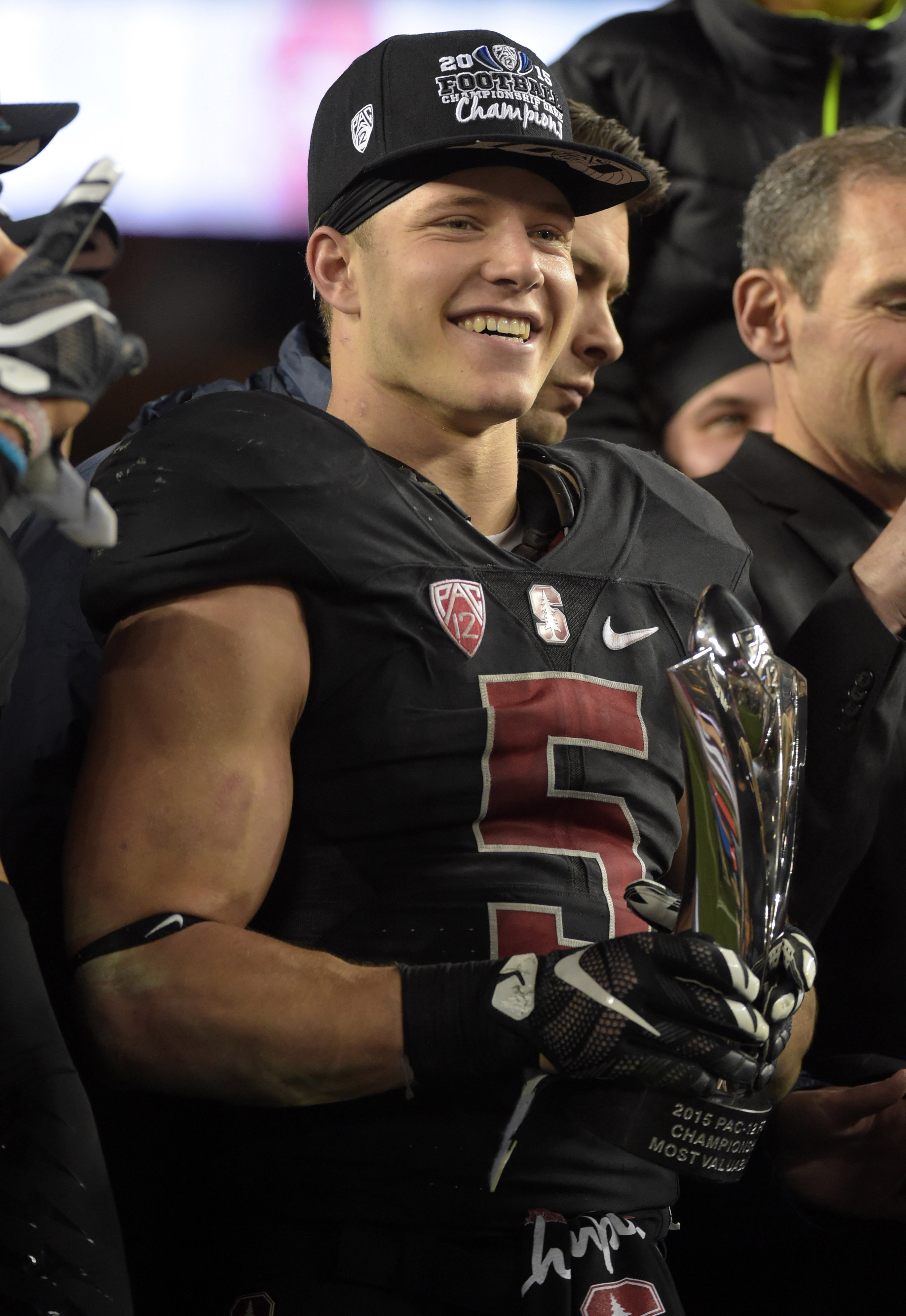 You want Christian McCaffrey to do a football thing for you? He'll do it. You want him to run? McCaffrey ran for 207 yards and a touchdown against USC in the Pac-12 championship. How about catching the ball? He had four receptions for 105 yards and touchdown. But surely he can't throw too? Yep, he threw an 11 yard touchdown pass to quarterback Kevin Hogan on a trick play. You want him to return, too? He notched 120 yards on 5 kick returns and another 29 on two punt returns. That's 461 all purpose yards on the day, which doesn't include the pass. McCaffrey has 3276 all purpose yards on the season, breaking the 27 year record set by one Barry Sanders and putting him more than 1000 yards ahead of the second place guy.

Christian McCaffrey is a 19 year old sopohomore. Which means we get at least one more year to enjoy watching him before the grown-ass version of him starts crushing NFL teams. And by "we", I am of course excluding the Pac-12. Good luck out there! Helpful tip: aim for the thighs.