Duff'd It! Rankings and Other Accolades: Paying Our Respects

IN MEMORY OF ALL THE COACHES WHO WERE FIRED THIS WEEKEND, OR THOSE WHO FINALLY DIED FROM DUFFING IT TOO MUCH

Share All sharing options for: Duff'd It! Rankings and Other Accolades: Paying Our Respects

We have finally made it to the end of the regular season (-ish, but no one cares about Saturday's Sun Belt Special), and the end of many, illustrious careers. College football's Black Monday was a mere two days ago, and the size of this year's coaching firesale was the largest it's ever been. Godspeed, Mike London, now you can answer your true calling as a private investigator. Farewell, Kyle Flood, one of many victims of Rutgers' deadly but necessary house cleaning. Goodbye, Mark Richt, please go somewhere that will keep you far away from Atlanta for the rest of your life.

5. Oklahoma State. After Baylor went down to TCU in a cold, wet, and miserable game in Fort Worth, the winner of the Big 12 came down to Bedlam. And at Bedlam, Oklahoma State did what they always do: lose to Oklahoma. Death, taxes, Oklahoma State losing Bedlam: these are the three guarantees in life, children. Bury Pistol Pete with his guns, and his playoff hopes.

4. Navy. The Midshipmen were a game away from an excessively patriotic AAC championship game, but Houston had other plans. For once, a team of red devils stood up to America and won. This also makes UConn the transitive AAC West champion. THANKS, COMMIES.

3. Florida. The Gators scored twenty fewer points against Florida State than Georgia Tech did. That is two points, total. Florida is officially dead last in the ACC Coastal.

2. Notre Dame. You could call being awarded a touchdown that clearly should have been overturned on review the luck of the Irish. But when that leaves enough time on the clock to allow your opponent to drive down the field and kick a game winning field goal, that's, what, the shadenfreude of the Welsh? The moons of Scotland?

Honorable mention: Georgia. I DON'T EVEN KNOW IF I CAN PUT THIS INTO WORDS

I GUESS WHEN YOU WIN TEN GAMES A SEASON EVERY SEASON IT STARTS TO GET BORING?

FROM A FANBASE WHO WAS TORTURED BY YOUR PRESENCE FOR FIFTEEN YEARS: GOOD BYE, MARK RICHT. PLEASE FIND A NICE NEW JOB SOMEWHERE ON THE WEST COAST. I HEAR THE SUNSETS THERE ARE LOVELY.

It is laudable of TCU punter Ethan Perry to chase a punt snap he bobbled, pick the ball up, and get a punt off. Unfortunately for him, Baylor's Shawn Oakman was there to ensure Perry would never again be able to take a punt snap without instinctively assuming the fetal position. 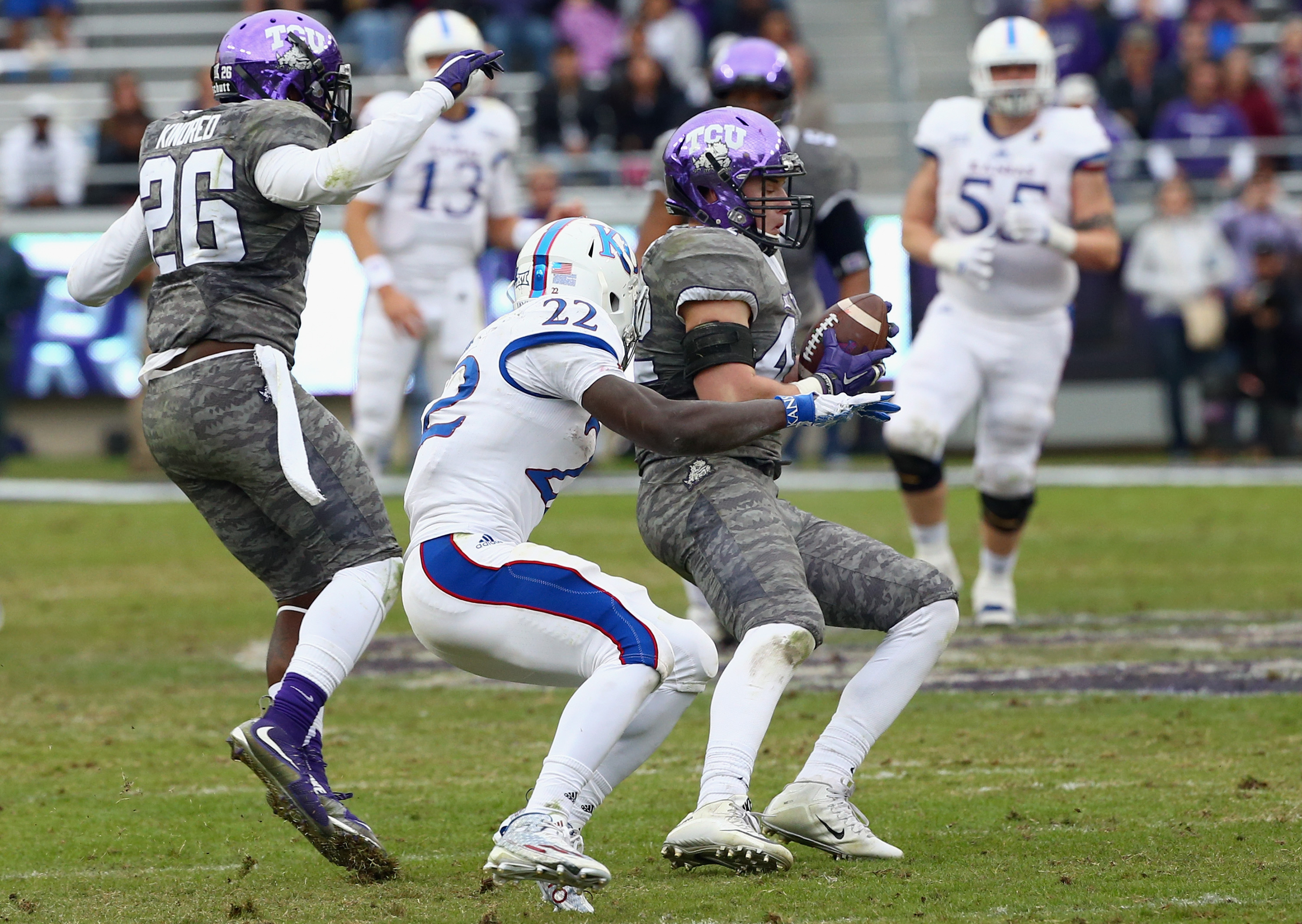 In the cold, dark, and wet environs of Amon Carter Stadium on Friday, nothing was colder than Ty Summers's heart. As Baylor lined up to go for it on 4th and inches in double overtime, Summers sat in wait. Devin Chafin took the handoff and ran forward - right into Summers's arms, the last of his school record 23 tackles. And then, suddenly, the stadium was bathed in the warming glow of sweet, vengeful victory.