Duff'd It! Rankings: At Least We're Better at Reviewing Things Than ACC Referees

Share All sharing options for: Duff'd It! Rankings: At Least We're Better at Reviewing Things Than ACC Referees

The ACC has just released this memo regarding the referees in the Duke-Miami game:

WE APOLOGIZE FOR THE ERRORS BY OUR REVIEW CREW. THOSE RESPONSIBLE HAVE JUST BEEN SUSPENDED.

Hey, that's great! It really doesn't do anything to fix the problems with the end of that game, but it gives us all the illusion the ACC cares and is really serious about this. A two game suspension! That's really putting them through the racks, ACC.

Hold on. The ACC has just released another memo regarding the referees in the Duke-Miami game:

Well, there you have it, folks. That should make everything better! Right, Duke fans?

Look, Cougars. Last year Connor Halliday wrote his name into history and you let him down when you missed a field goal in the final seconds that would have won the game.

This year.... look, guys. You'd battled #8 Stanford the entire game. You were looking at a long field goal to finish off one of the biggest upsets in your recent history. All I could think while watching was: "Don't do this again, you crimson bastards."

You did it again.

More importantly: you did this to me. It was late, you were the last game on, and you'd gotten me emotionally invested in your football team. Again. Stop doing this to me.

4. Georgia. Who would have guessed benching the first string quarterback, starting the third string (for his first ever start), and having the second string punt would have worked out poorly for the Bulldogs in Jacksonville? You just need to keep switching them around until you find the winning combination, Mark Richt. Next week, have your second string quarterback start, your first string kick field goals, and your third string.... I dunno, fair catch punts? That's not something you've tried before, is it? It is?

3. Texas. There are many words you could use to describe Texas getting shut out by Iowa State. Humiliating. Rock bottom. Balls. But not embarrassing, nooo. Charlie Strong certainly wouldn't use that word.

"Wait," I hear some of you asking. "Wasn't Texas Perma-Duff'd earlier this season?" To which I say: shut up, I make the rules. And the rules say: if you upset your heavily favored rival in a nationally televised game, you get off the list. Besides, it's not like I was not going to list Texas getting shut out by Iowa State when they'd lost to the Cyclones once before. Ever. It shouldn't happen, and even Paul Rhodes agrees!

2. Minnesota. My gods, Gophers, I haven't seen someone screw up an ending that badly since the Wachowskis finished the Matrix Trilogy.

Clemson's pretty much put the kibosh on #Clemsoning the past few years, but the ACC has ensured #goacc will remain prominent for years to come.

Honorable mention: West Virginia. TCU demolished the Mountaineers last Thursday, but Dana Holgorsen may have cemented himself as the least mad losing coach in college football history with this game recognize game moment. Trevone Boykin is a goddamn sorcerer, and Holgo knew well to pay his respects.

What the hell? Saquon Barkley just airwalked into the endzone. He stepped on at least two things that weren't actually there. This is the cheapest NCAA glitch ever.

Hi Syracuse! We were wondering how much it would suck to be FSU's first opponent after losing their first regular season game in three years. It turns out that even without their top quarterback and running back, it still sucks a lot! Thanks for being our guinea pig. 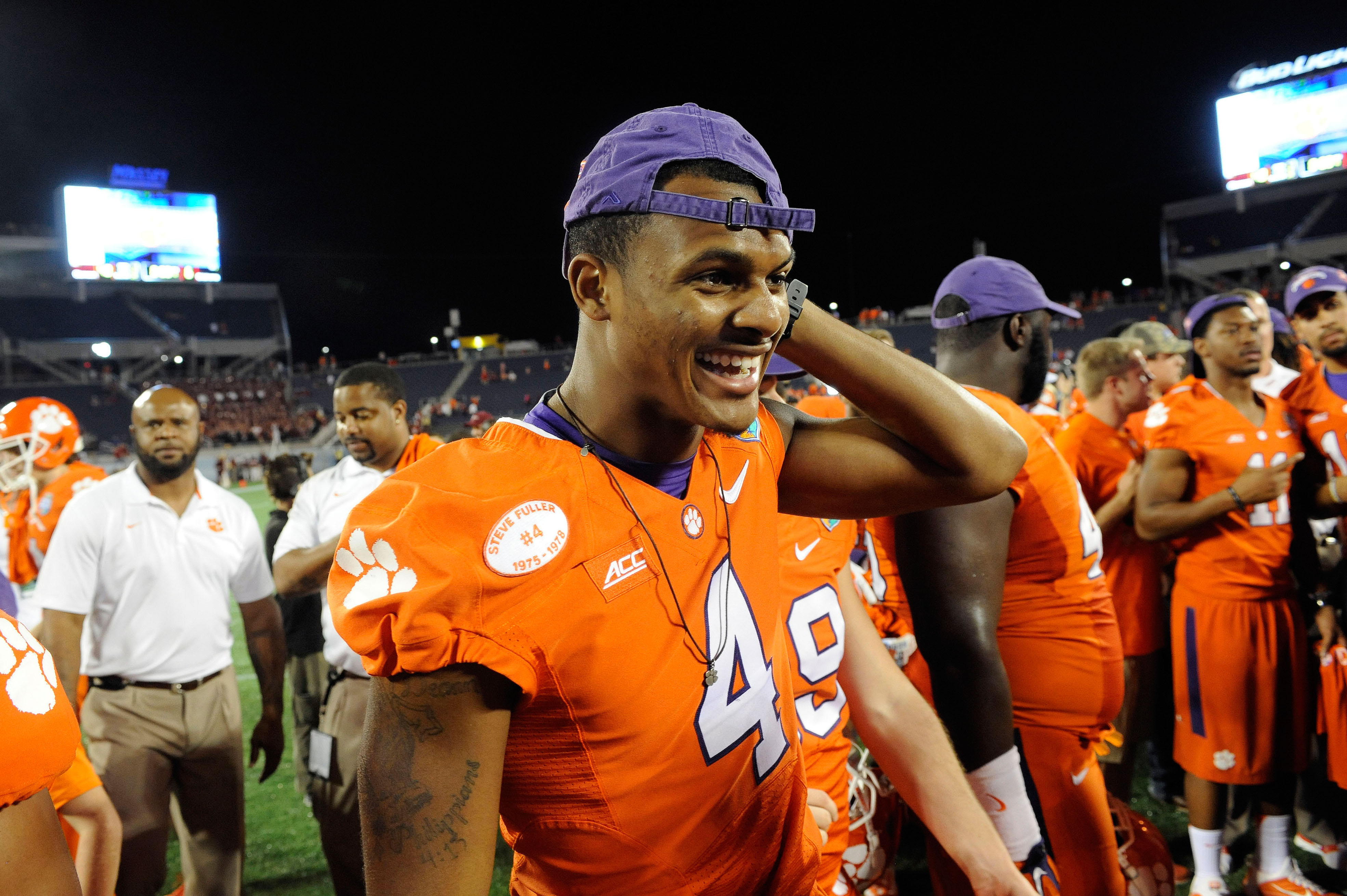 Remember two minutes ago when I mentioned Clemson has pretty much buried #Clemsoning into the ground at this point? (If you forgot, mentioning it to Dabo Swinney makes him mighty unhappy.) Watson is the guy operating the scoop truck with the last, gigantic mound of dirt to put on its grave. Watson tossed for 383 yards and 5 touchdowns vs. NC State on Saturday, and added 54 rushing yards and another touchdown on top. Clemson is kind of actually really good, and if they defeat FSU this week, you can expect to see lots of Dan Radakovich in his orange-clad ass prancing about.

So, congratulations, Deshaun Watson! You're number one! Really. That's what the rankings say. And who are we to doubt rankings?