Duff'd It! Rankings and Other Accolades: We've Found Our Polar Opposite in Michael Geiger

THE DUFF'D IT RANKINGS HAVE FOUND A NEW ENEMY

Share All sharing options for: Duff'd It! Rankings and Other Accolades: We've Found Our Polar Opposite in Michael Geiger

LSU fans might be nuts. We need to do some research on the side effects of overconsumption of cayenne pepper.

5. Memphis. Remember when Memphis was good? It was so long ago. They scored zero touchdowns against Temple last week. Temple might actually be dead at this point. Their finale is against SMU, so we'll find out for sure: a living Temple team will blow out the Mustangs; a Temple team comprised of shambling zombies will still win by a touchdown.

4. Houston. Everything was going perfectly for the Cougars. They just had one game between them and an AAC SHOWDOWN OF EPIC PROPORTIONS against Navy. And then they lost to UConn. UConn? Thanks for ruining everything, Canada.

The good news for Houston is they still have a very good coach in Tom Herman, and there's definitely no chance of losing him to a power five school this year no way at all noooooope

3. Georgia Southern. You were the chosen ones, Eagles. In its hour of need, America turned to you to vanquish Georgia, and you punted from the Georgia 40 rather than even attempt a game winning field goal.

But then! Just when you couldn't disappoint more, you do. You went for it on fourth and short in overtime, which is good! And then you telegraphed your play by moving into the Wildcat formation. We're all very disappointed in you, Georgia Southern. We've already begun forgetting who you are.

2. Ohio State. YOU NEED TO KNOW EXACTLY TWO THINGS ABOUT OHIO STATE'S PERFORMANCE AGAINST MICHIGAN STATE. FIRST IS THE BUCKEYES WERE HELD TO 132 TOTAL YARDS, INCLUDING JUST 33 FROM STAR RUNNING BACK EZEKIEL ELLIOTT, WHO WAS SO UNHAPPY WITH THE PLAYCALLING SATURDAY HE IS LEAVING COLUMBUS FOR THE NFL AFTER THE SEASON.

THE SECOND IS WHEN SPARTAN KICKER MICHAEL GEIGER WAS CALLED UPON TO KICK THE GAME WINNING FIELD GOAL, HE, IN HIS OWN WORDS, F**KING DRILLED IT. CONGRATS TO YOU, MICHAEL GEIGER, BUT KNOW THAT DRILLING IT IS THE EXACT OPPOSITE OF DUFFING IT, AND THUS WE WILL FOREVER BE SWORN ENEMIES.

1. South Carolina. You see, Gamecocks, the thing about the SEC-SoCon challenge is - the SEC is supposed to sweep every year. You get to dodge ridicule about the whole thing by saying "no, look, we're just giving ourselves a bye week before the last game of the season!" when that happens. When you lose, everyone rightfully laughs at you.... for like a week, and then the SEC-ACC challenge and everyone laughs at the ACC now matter how well they do.

Honorable mention: Arkansas. You play for kicks, you get kicked. After starting at their own 11 and throwing almost all the way down the field, Arkansas.... called three straight rushes and settled for kicking a field goal. It was blocked, and Mississippi State won. Finally, we've reached the greatest part of the year: Novembert.

When running a trick play, every little thing has to go exactly as planned. Starting with, I dunno, maybe the snap? That's supposed to be the swinging gate play, but it looks like somebody left the gate ooooooopennnnnnnn 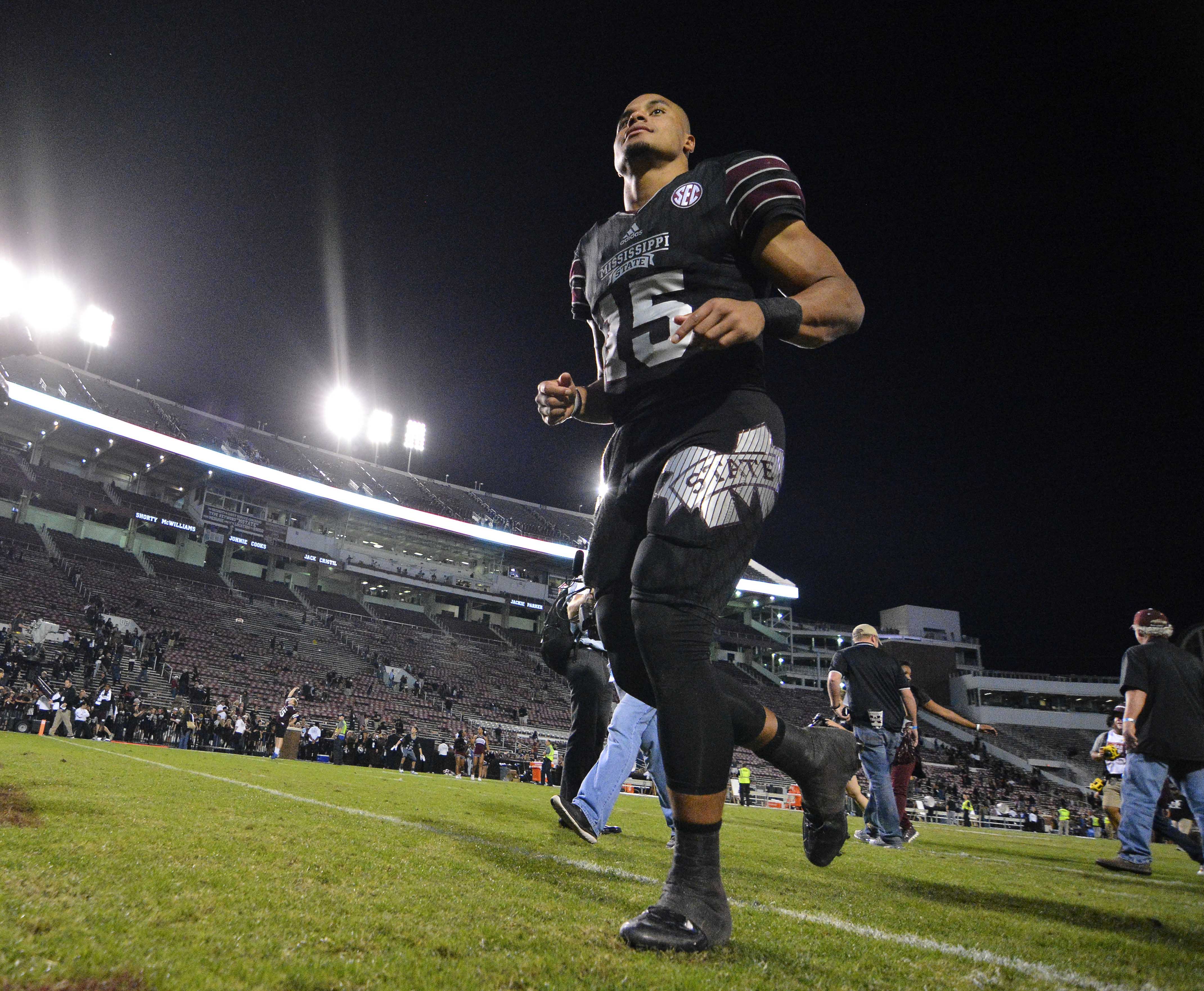 Mississippi State scored seven touchdowns in their game against Arkansas, and Dak Prescott was involved in all of them. Prescott threw for 508 yards and five touchdowns on a 38 for 50 performance against Arkansas, and ran for another 46 yards and two touchdowns, earning him the second biggest accomplishment by a Dakota in the past decade. (North Dakota has NDSU and the Bison's terrifying FCS Dynasty. South Dakota, you're seriously slackin'.)

So congratulations, Dak Prescott! And thank you for making this a Novembert to remembert.