Duff'd It! Rankings and Other Accolades: We'll Make Our Own Playoff, With Blackjack and Hookers

ACTUALLY, FORGET THE BLACKJACK. AND THE HOOKERS. AND THE PLAYOFF. YOU CAN'T PLAN ON SOMEONE DUFFING IT.

Share All sharing options for: Duff'd It! Rankings and Other Accolades: We'll Make Our Own Playoff, With Blackjack and Hookers

College football is chaos. That's what's so great about it. But then in comes this committee of executives and bigwigs. And they want to bring some semblance of order to everything, using things like "game control" and "body clock index".

To hell with all that! College football defies your order, college playoff committee. All of your models and predictions will fail you. When all of college football has duff'd it, you will look up and shout "save us!", and I'll look down and whisper, "no".

5. Memphis. There is no greater duty than serving one's country. A close second is allowing yourself to get dunked on by a service academy, ruining an undefeated season and likely torpedoing a shot at a New Year's Six bowl. That's what Memphis did Saturday against Navy, and for that, Tigers, we salute you.

Yeah, that doesn't rhyme. Or fit the lyrical structure of the song. It's a work in progress.

3. Michigan State. The Spartans saw their undefeated season (and likely their playoff hopes as well) go down in flames when Nebraska decided they would be the ones to clinch the improbable 4th quarter comeback, for once. The Cornhuskers grabbed the lead in the final seconds on a play that might have been illegal. Was it actually illegal? Is it possible the Illuminati are behind this? Who knows.......

*the blinks just translate to "DUFF'D IT" over and over*

2. LSU. "LEMME TELL YOU SOMETHING PAWWWWWWL THEM LSU TIGERS MAY HAVE HAD LEONARD FOURNETTE BUT AT ALABAMA HE COULD HAVE BEEN FIFTEENETTE AT LEAST UNTIL JANUARY WHEN THE TIDE RECLAIM WHAT IS RIGHTFULLY THEIRS"

1. Ole Miss. Thanks for making a Cards Against Humanity card real, Rebels. And this. Mississippi remains the worst state.

On the bright side, Alabama now has transitive losses to both Memphis and Arkansas! That's really going to hurt their resume in the eyes of the CFP committee.

Honorable mention: Duke. Look, Blue Devils, I know this football thing is still strange and foreign to most of you, but holding your opponent to 66 points is only good in basketball. In football, it is very bad. David Cutcliffe said the 66-31 loss to UNC made him feel like he was in the Big 12. So, congratulations, Duke! You're now Kansas.

I don't blame Christian Hackenberg one bit here. He's following the time-honored marching band adage: if an official is in your way, you run them the hell over. Yes, in marching band, officials aren't real people.

Zach Vraa didn't just snatch the ball from behind that poor Western Illinois DB's head. He took his soul. #58's now lifeless body only continues moving due to inertia. 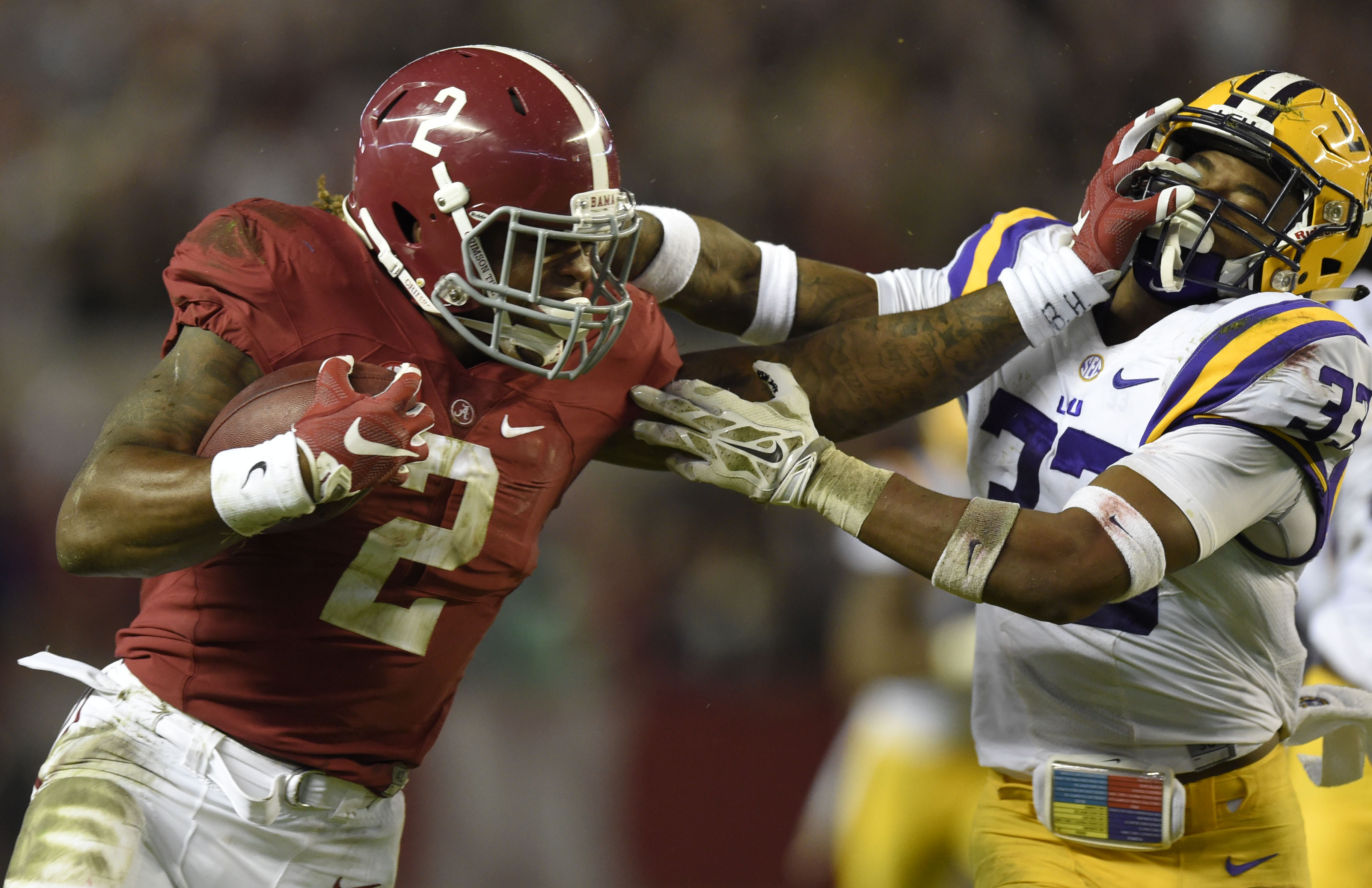 Once again, Alabama is a soulless, relentless killing machine. And once again, they're slapping down an LSU team foolish enough to think they can topple the giant. This year, that giant is Derrick Henry, who ran for 210 yards on 38 carries for 210 yards and scored all three of Alabama's touchdowns on Saturday. This machine now has its sights set on Mississippi State next week, and oh god no she's coming back help