Duff'd It! Rankings and Other Accolades: Yes Michigan-Michigan State Why Am I Even Writing This

Share All sharing options for: Duff'd It! Rankings and Other Accolades: Yes Michigan-Michigan State Why Am I Even Writing This

This may surprise some of you, but I neither watch nor write about college football for a living. I am simply a lover of the game who tries to shove as much college football into his eye sockets as he can for a few Saturdays each fall. But I am only human, and after a long Friday night and absorbing another Georgia Tech loss, I fell asleep watching Michigan-Michigan State.

But then, I woke up. Maybe it was my Duff'd Sense tingling. I'm not sure. Somehow, my body knew. The biggest Duffing of the season was about to happen. And there was no way I was napping through it.

5. Boise State. The Broncos had enough turnovers Friday night to feed two families of four. Or a family of eight. Maybe it's a really Catholic family, I dunno. Boise's loss eliminated them and the Mountain West from New York Six bowl contention, so now the conference gets to spend the rest of the season with Conference USA in mid-major obscurity.

4. Ole Miss. "Oh, but Memphis is good, they're 6-0 now and have a good chance of getting slotted into a New Year's 6 bowl!" I hear you protest. To which I reply: Yes! This is true! The AAC is very good this year and has several talented teams. But I'll let former Western Kentucky linebacker Andrew Jackson explain why Ole Miss belongs here this week.

The AAC now has a transitive win over Alabama. That rumbling sound you're hearing is tens of thousands of Bama fans attempting to call into Finebaum at once to challenge the conference to a 12-teams-on-one football game.

3. UCLA. The Bruins were eviscerated by Stanford so badly even two garbage time touchdowns didn't bring them back to within 20. But don't worry, UCLA,  this game started at 10:30 Eastern on a Thursday, so no one saw it! It's like our little secret!

2. Kansas State. The Wildcats lost 55-0 at home to the Oklahoma Sooners on Saturday. It was their worst home shutout loss in history. After the game, coach Bill Snyder wrote a heartfelt letter to the university and the student body apologizing for the loss. He then went home, put on a mask, and ventured into the mountains to murder several innocents. Everyone has their own preferred outlet for venting.

1. Michigan. What more needs to be said about this game? Some losses you can feel good about because your team put up a valiant effort. Some are just total ass-whippings. Some are last second heartbreakers.

And then you have Michigan-Michigan State. There are some losses that leave you thinking jumping off a bridge is a reasonable thing to do. For Michigan, this was one of those games. If it makes y'all feel any better, Wolverines, you're still in prime position to pop Ohio State at the end of the season. Unless they finally figure out their quarterback situation, which, maybe they have now?

Honorable mention: Ball State. Well hey there, Cardinals! No, I'm not really sure why you're here either. Just give me a second to look at the paperwork....

//looks back at paperwork

...you know you're not supposed to lose to Georgia State, right?

This first play comes from a school I'm not familiar with. I'm told it's in Indianapolis? Well, IUPUI doesn't play football, so this must be Butler, with their blue and white uniforms. They're really innovating some new trick plays down in FCS, apparently.

Okay, wait, now I'm hearing this happened in the NFL? Quit joking around, guys. The NFL is full of professionals. They'd never try a trick play this poorly conceived and executed.

"Hey man, wait, you're supposed to throw the ball." 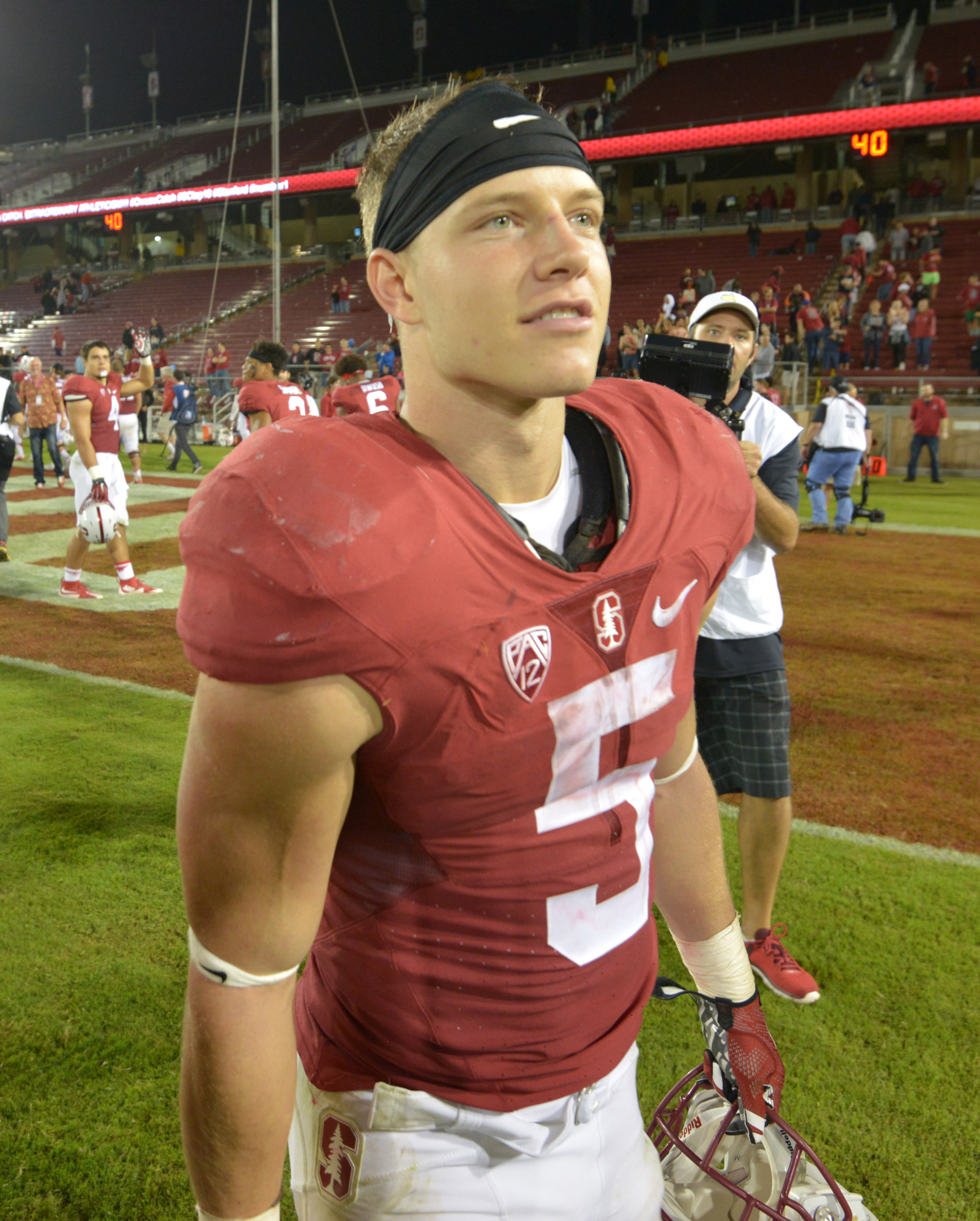 Look at Christian McCaffrey run! He notched 25 carries for 243 yards and 4 touchdowns, which is even more impressive when you consider the rest of the offense totaled 198 yards and three touchdowns (and 4 of those yards were on a reception by McCaffrey, to boot). And since no one on the east coast saw it, I took it upon myself to give McCaffrey the recognition he deserves.

So congratulations, Christian McCaffrey! Your prize is the satisfaction of knowing the coastline you live on is far prettier than the one on the other side of the country. Take lots of pictures to make those jerks in Connecticut jealous.