Duff'd It! Rankings and Other Accolades: Steve Spurrier is Stealing Charlie Strong's Golden Hat and Riding a Golf Cart into the Sunset

Share All sharing options for: Duff'd It! Rankings and Other Accolades: Steve Spurrier is Stealing Charlie Strong's Golden Hat and Riding a Golf Cart into the Sunset

Spurrier said he'd retire from college football once it stopped being fun, and after 26 years and 228 wins as a head coach, the fun ran out. In those 26 years he established and cemented his status as college football's Grand Master Troll, endlessly ribbing his school's biggest rivals: from UNC in his tenure at Duke; to Alabama, Tennessee, and FSU at Florida; and to Clemson at South Carolina. He saved the peak of his disdain and highest degree of burns for Georgia, though, and for that alone he will forever remain a favorite of myself and many other Georgia Tech fans.

Florida wanted Spurrier to come back after firing Ron Zook in 2001, but when they asked him for a résumé, he simply said, "Go look in the trophy case. There's my résumé."

Godspeed, Steve Spurrier. You were my college football spirit animal, and a seat on the Duff'd It! Council will remain yours forever.

5. Rutgers. Down to their likely final play with the game's last seconds ticking out, Rutgers elected to spike the ball. On fourth down. Bold strategy, Scarlet Knights, but it probably won't win you any games, ever. Turns out if you take Rutgers, and subtract their head coach..... they're still Rutgers! But they are getting head coach Kyle Flood back from suspension next week, so..... yay? I guess?

4. Oregon. The Ducks wore Lewis and Clark themed Explorer uniforms for their game against Wazzu, so naturally, they died of dysentery in double overtime. Just pay the damn ferry man next time, Ducks! Don't try to ford the river! That's the worst of all the options!

3. Boston College and Wake Forest. It takes two to do the #goacc tango, and there are no more fitting partners than these two. The Eagles steadfastly refused to score all game, but at the very end, the Deacons refused to let them not score. Boston College's resilience against scoring won out in the end, though, and Wake Forest came away with the 3-0 victory when BC refused to score from the goal line with just seconds left.

Wake Forest has participated in the three most #goacc football games of all time and won them all, winning by progressively fewer field goals each time. The Deacons will somehow manage to win a game 0 to negative 3 in the next decade. I'm sure of this.

2. Georgia. Yes, it is unfortunate Nick Chubb injured his knee on the first play of the game. (The footage of which, by the way, you should just not go search for please for the love of god don't look for it.) It's also unfortunate the Dawgs blew a 21 point lead against Tennessee, losing to the Vols for the first time since - wait, that can't be right. It is? Wow - Lane Kiffin. Y'all should just fire Mark Right now, UGA. He's never going - oh, you're way ahead of me on that, I see.

1. Oklahoma. Hmm, let's see, it's an odd year, and Texas was unranked and massive underdogs to the Sooners, so of course the Horns beat them in Dallas. What? You're saying that sounds like crazy moon logic? Welcome, this is the Red River Shootout at Fair Park in Dallas, Texas. At least you're at the world capital of comfort foods, Sooners. Go eat a funnel cake and some chicken fried lobster and you'll feel way better about everything.

Honorable mention: Northwestern. You know what a Wildcat careening back to earth from space sounds like? Exactly like a Wolverine mauling. Yeah, I thought that was weird, too.

Team you should stop asking me about: Georgia Tech. They're just a bad team and this is what watching them in Clemson this past Saturday was like.

Dismissed for the rest of 2015: USC. The Trojans initially occupied the 5 spot in this week's rankings, and while they have a lot of issues (and AD Pat Haden should probably be fired, preferably in the middle of a bungee jump), Steve Sarkisian's alcoholism is a serious issue and not something to make light of. Sarkisian is seeking treatment, and the Duff'd It! council wishes him a full recovery.

"Okay, you know the play for this kick, right?"

"What? No, you fool! It's supposed to be a regular kick! You've doomed us all!"

"Okay, that actually turned out fine, that was fine, good job." 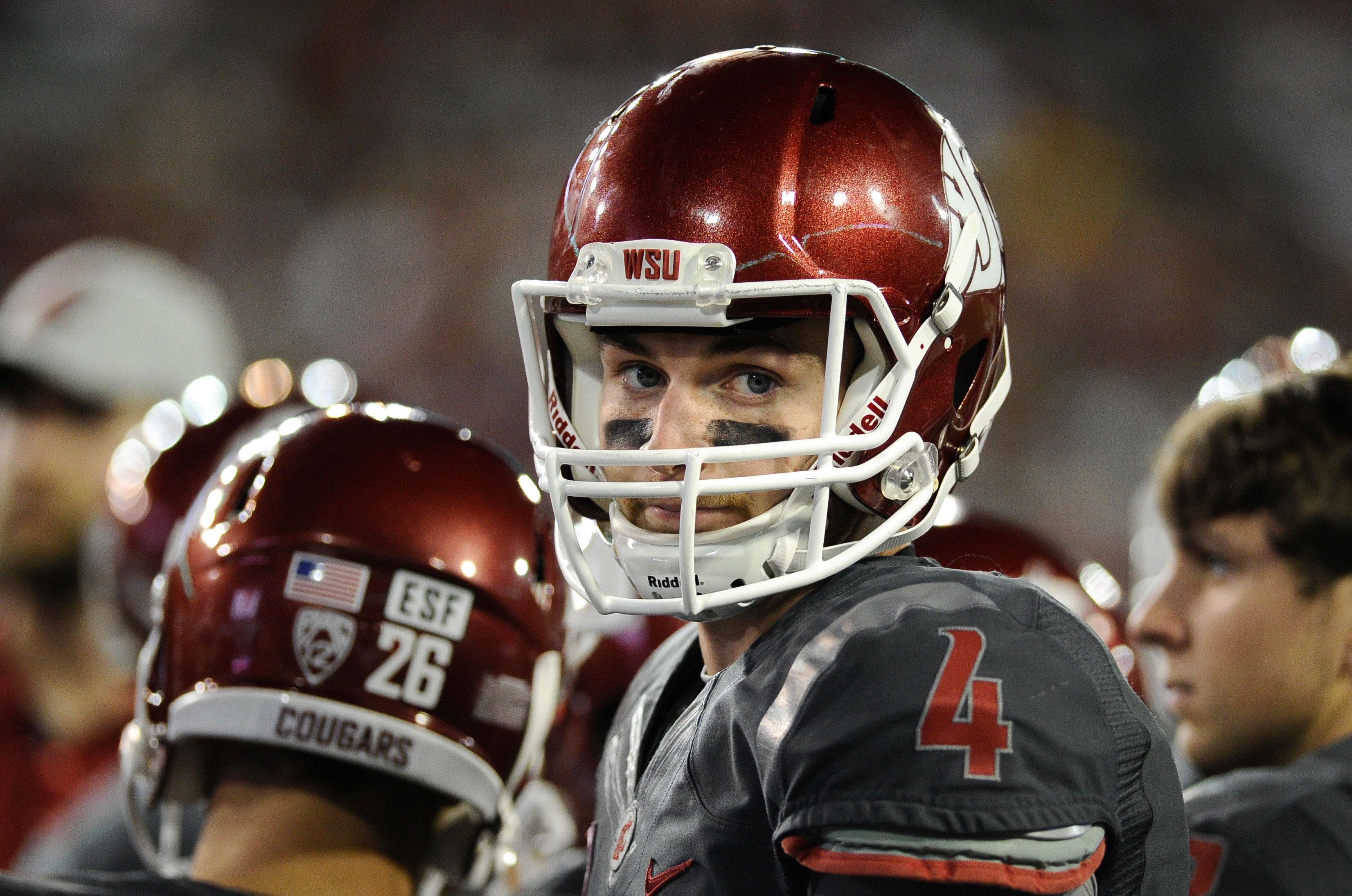 Two-ish years ago, Vernon Adams was the very first EotMotW recipient in this incarnation of the Duff'd It! Rankings. (It's true!) This past weekend, Adams' opponent's quarterback won the award while he sat on the bench. Most uncomfortable torch passing ever.

Anyhoo! Under the guidance of Dread Pirate Mike Leach, Falk swashbuckled his way to 505 yards and 5 touchdowns on a 50 for 74 day to end an eight game winning streak by Oregon over the Cougs. (He was also sacked 7 times for a loss of 49 yards, but shhhhhh he still beat Oregon and that's all that matters.)

So congratulations, Luke Falk! Take that Oregon Duck, stuff it, and mount it over your fireplace. You deserve it.