Taking an in-depth look at the stats behind the game

Each Week FTRS will take apart the traditional box score and present our readers with the key insights on how the game was played. You can view all the Advanced Box Scores in the Football Analytics Story Stream. For any questions about the metrics listed below please first refer to the Advanced Stats Glossary for definitions.

Enough with the pleasantries, let's get right into it.

I'll start with the positives first:

And now some things we didn't do so well.
Overall I think there were some encouraging signs (Tony Zenon's play, Justin Thomas is faaaaast) and some not so encouraging (not beating ourselves). We will have to play better if our goal is to win the Coastal Division. 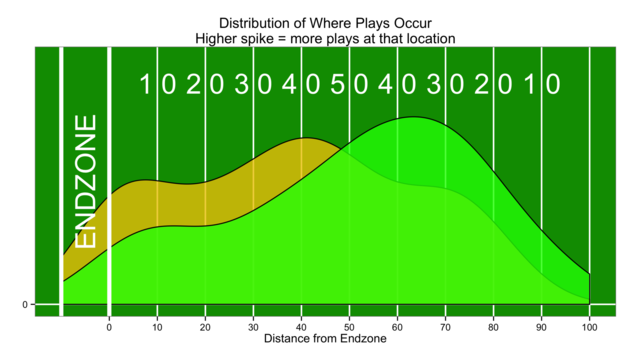 Just as a reminder this shows the frequency of where each team's plays occurred on the field. A "taller" bump represents the fact that more plays happened in that area for the team. Tulane's plays are the bright green blob, Tech's is gold. The closer to the end zone, the better field position.

We really did win the field position game. Even though we only started with better field position by 3 yards per drive (check the Advanced Box Score for Hidden Yards), we were able to move the ball and set us up for scoring opportunities.

This is something new I am trying after receiving some feedback from some readers last week (We here at FTRS take care of our readers). This shows the progression of field position from drive to drive for each team, so if you want to "follow along with the game" you would start at the bottom and work your way up. The x-axis represents the distance away from Georgia Tech's endzone. So the "0" yard line is Georgia Tech scoring a touchdown, and the "100" would be Tulane scoring a touchdown. Once again the green bars are Tulane and gold are GT. I also removed any drives that end in a kneel down, so our long drive at the end isn't shown. Should it be? 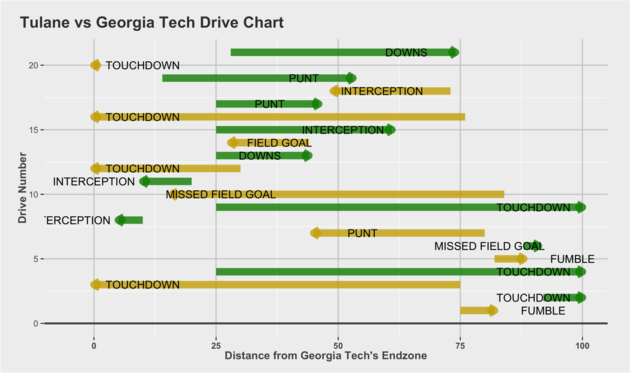 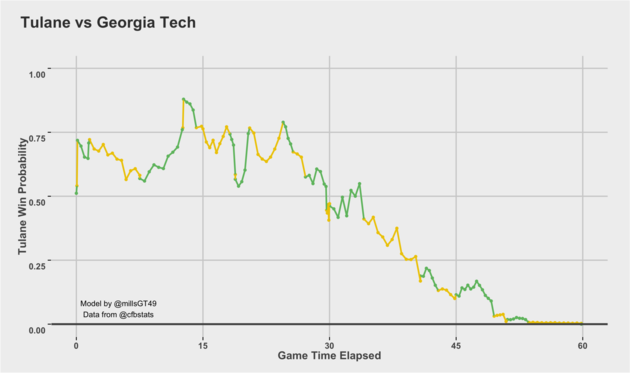 And here are the 5 biggest plays of the game according to the change in win probability of the play:

What do you guys think? Any insights you gained from the numbers? Then put them in the comments. Also include any suggestions for improving the visuals as well.