Analyzing the Strengths and Tendencies of the Tulane Green Wave

Each week at FTRS we will be providing charts, graphs, and analysis into the characteristics of how our opponent plays, not just the quality of their performances. This week Tulane is up. You can view all our other Tulane content in the Tulane Story Stream.

The Tulane Green Wave present an interesting opponent for the Jackets. They are a program with some real momentum, a new stadium, and increased support from the administration. If Tulane can become a fun and energetic team I can see them really gaining some traction in New Orleans and the rest of Louisiana. But all that doesn't matter this weekend. In order for GT to leave Nola with a win they will have to execute and shore up the defense from last week. This post will focus on the areas that Tulane will give Tech trouble with, based on their past performance. Obviously with only one week in the books there won't be much to analyze but this is the format I will use for Opponent Previews this year.

Just to give a quick overview I want to look at three different statistical ranking methods. The fact that both teams aren't ranked in the AP and Coaches poll makes this the only way to do it anyway. The rankings I used were S&P+, FEI, and ESPN FPI. S&P+ is a play by play rating system developed by Bill Connelly, FEI is a drive based ranking system by Brian Fremau, and FPI is ESPN's analytical power ranking. Here are the national ranks for both teams:

Georgia Tech is clearly the stronger team according to these methods. Vegas agrees and favors us by 10 points.

When Tulane Has the Ball

I want to look at the tendencies of the opponent each week in this column, and I think I've found some interesting ways to do it. However these are brand new and can definitely use some refinement. So any comments or suggestions about the way the data is presented would be welcomed in the comments.

The following chart shows the percentage of plays where Tulane runs the ball and also how often Georgia Tech's opponent's run the ball, broken down by down and distance. The distances are broken up in to 5 groupings; 1-3 yards for a first, 4-6 yards for a first, 7-10 yards to go for a first, 11-15 yards to go, and then anything left over. Obviously there will be a lot of plays in the 1st down and 7-10 yards to go grouping, but I think this is a good breakdown between possible distances to show a team's performance on short vs. long downs. The color represents how much more they run than an average team in each grouping. The more red the text the more they run compared to an average team, while more blue means they pass more. If the text is grey it means they run the ball at an average rate. Also the size of the text represents how many plays they have had this year. I don't want to know the exact amount in each grouping but it is tough to trust the numbers when teams have only run one or two plays in some groupings so far. 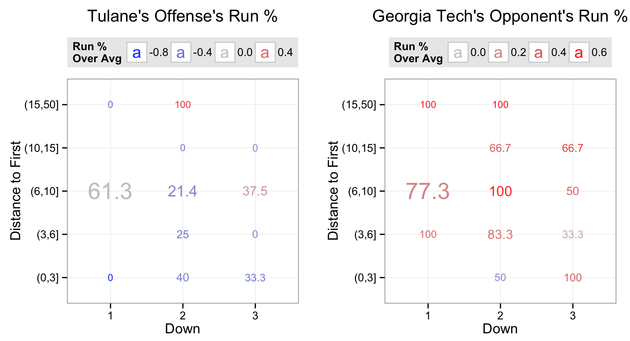 What does this tell us? Well, with only one week in the books it is tough to draw huge any conclusions. Tulane obviously passed the ball more than the average team does pretty much across the board. Wofford ran the ball a ton on us. It will be interesting to see these plots develop as more games are added.

Another way we can measure a team's aptitude is using Success Rate. This figure measures the percentage of plays that are "successful" for a team, where a "successful" plays is define as a play on 1st down that gains more than 50% of the yards for a first, 2nd down plays that gain more than 70% of yards for a first, or 3rd/4th down plays that get a first. I have broken down each team's Success Rate by the same down and distance groupings as the play calling graph. This time the more red a number the more successful a team is, while more blue indicates less success.

Same caveats apply, there has only been one game. Tulane did well on third downs last week, lets hope Georgia Tech can turn around their third down performance.

Another measure of offensive performance is yards per play. Here is the same type of chart as before but now showing the average yards per play for each grouping. 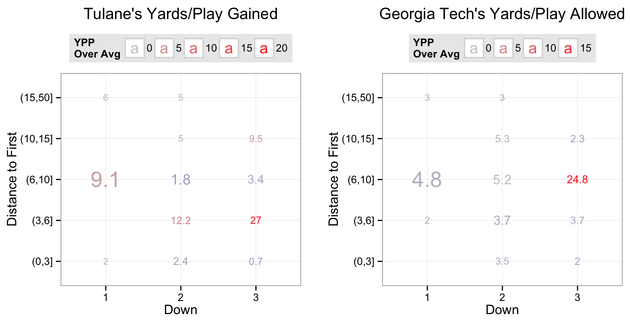 Tulane gained a lot of yards throwing the ball on mid-range 2nd and 3rd downs, but given the 100% success rate this was probably only over a couple of plays. Again, with only one game in the books it is tough to really judge how a team has played. However I did want to put these graphs out there now so I can get some feedback and so you guys can get an idea of what to expect this season. Georgia Tech actually limited Wofford's output fairly well except for that one long play....

When Georgia Tech Has the Ball 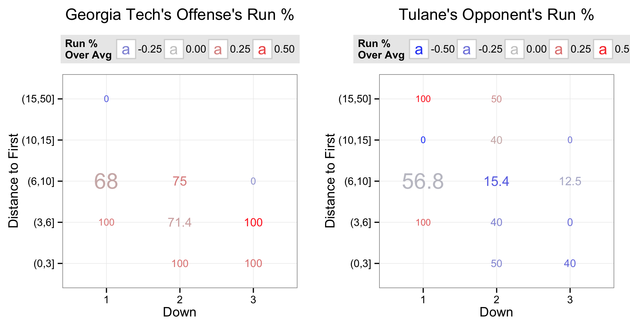 Georgia Tech's plot will be red for the whole year so this will be boring week in and week out. 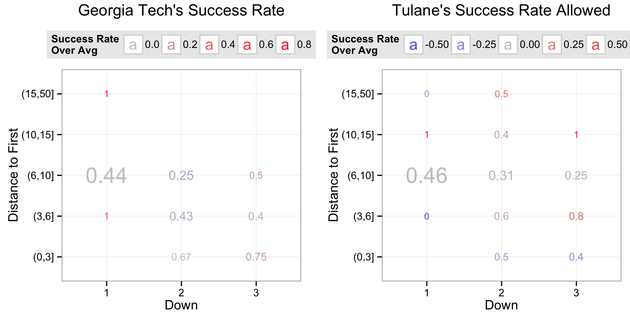 Expect Georgia Tech to separate itself in the short-to-go distances as the year progresses. Tulane did a decent job on 1st and 2nd downs against Tulsa. 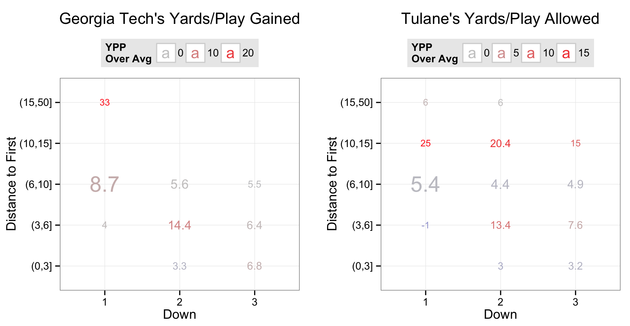 Georgia Tech had that one really lucky 1st and long play, but everything else was pretty normal. Also averaging 8.7 yards per play on 1st and 7-10's is pretty great. Tulane really needs to work on the big plays when they have already forced an opponent into a long-to-go situation.

I would love some feedback on these, so please fire away in the comments. Also if there is another piece of information you would like to see then please let me know!

What do you think about the upcoming matchup? Any potential problems for the Yellow Jackets?