Duff'd It! Rankings and other Accolades, Week 4

FINALLY OVER THE CRAZY BIZARRE FEVER DREAM THAT WAS THIS WEEKEND

Share All sharing options for: Duff'd It! Rankings and other Accolades, Week 4

Week 4 of 2014 is in the books and it still doesn't seem real. We saw Georgia Tech notch a comeback victory and Paul Johnson smiling from it! A Big Ten team beat a (ranked!) SEC team! Georgia State led a Pac-12 at halftime! (They were shut out the second half, but still! Georgia State!) And once the fever broke we realized it was all real, and Arizona did indeed cap off a 4th quarter that saw 50 points scored with a Hail Mary to beat California.

5. Louisiana Tech. Now hold on a minute, there's nothing wrong with losing to Northwestern, even if they're B1G. In fact, it was mighty charitable of the Wildcats to come to Ruston.....

Oh. Northwestern State. Hell, Bulldogs, you already gave the Demons a bunch of money to come down from Natchitoches, you didn't need to give them the ball five times too. That ain't how Johnny won that golden fiddle.

4. Kansas State. The Wildcats really could have won this game, Gus Malzahn worked his unholy magic on them, causing them to miss three field goals and throw an interception in the end zone, leaving at least twelve points on the field. As far as Auburn fans are concerned it's just another sign from god. So #blessed to be part of the Auburn family and have the ability to curse our opponent's kickers. War Eagle!

3. Michigan. "...on that day all the springs of the great deep burst forth, and the floodgates of the heavens were opened. And rain fell on Michigan Stadium forty days and forty nights.... the waters flooded the field for a hundred and fifty minutes."

"... and only when Michigan sold tickets to the Minnesota game for two bottles of Coke did the fans return."

The Old Testament of the College Football Bible is really weird, man.

2. Missouri. That sound you just heard was Dan Beebe's pants returning to earth. Losing to a B1G team that lost to a MAC team just the previous week, Mizzou? Well, that's some kind super B1G SEC B1Gness. And here we thought those SEC bastards were content with just being called the best football conference.

1. North Carolina. East Carolina has moved past basic looting and plundering and gone into "steal everything that isn't nailed down or on fire" mode (and, honestly, things that are nailed down aren't exactly safe either). The Pirates put up 70 points and 789 yards on the Tar Heels before firing all cannons and sinking the SS Dark Horse Coastal Champion to the bottom of the Atlantic. But that happens every year to North Carolina, and they'll have a replacement ship ready for next August.

Honorable mention: Tampa Bay. South Florida did not lose this week, for they were playing the one FBS team they do not lose to: UConn (That's why you're stuck in the American, Huskies. You're too #goacc for the ACC). Thankfully, because derp is a universal constant, the other football team from Tampa had enough to keep the universe in balance. The City of Atlanta thanks you, Buccaneers! Unfortunately, there are no "pay to get your ass beat" games in the NFL.

...you know what, screw it. USF and UConn played a game that featured fourteen punts and one team running 37 plays. The Bulls and the Huskies earn the Double Duff'd! award for playing a game that will be remembered as an affront to the game of college football.

Not an honorable mention, not even a duffing, just a tough loss, seriously: Clemson. "But they ran a stupid play call in overtime!" Yep, that happens. "They choked with the game on the line!" That's called Tuesday in Yankee Stadium, son. "But they-" nope, nope, nope. Clemsoning is a special, fall on your face and completely embarrass yourself kind of loss, and losing to the top ranked team in the country, on the road, in overtime, when you were a double digit underdog, doesn't qualify. It's a loss that will give Clemson fans nightmares for weeks, sure, but Clemsoning it ain't.

I still have the ball

what do I do 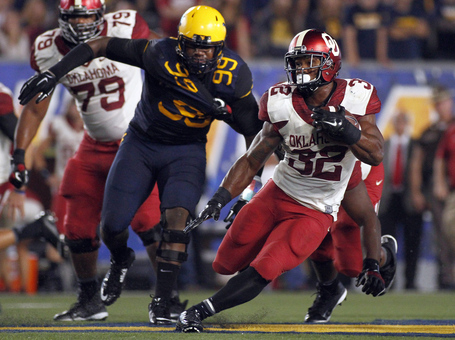 The couches of Morgantown can thank Samaje Perine for keeping them safe this week. Perine had 34 carries for 242 yards and 4 touchdowns, then stole Dana Holgorsen's motorcycle and rode it all the way back to Norman. Holgo wasn't even mad about that, he's got like twenty more in his garage. Please someone get Samaje's EotMotW medal to him before West Virginians figure out how to distill moonshine from it.