Taking an in-depth look at the stats behind the game.

Each Week FTRS will take apart the traditional box score and present our readers with the key insights on how the game was played. You can view all the Advanced Box Scores in the Football Analytics Story Stream. For any questions about the metrics listed below please first refer to the Advanced Stats Glossary for definitions.

Long time readers may remember this column from last year but I have some new goodies as well. For those new readers I will explain each graphic throughout the column. As always any comments about the presentation our welcomed in the comments.

I am attempting to visually represent field position throughout the game. I already listed the average starting position of each team in the Advanced Box Score but I want to look at where each team had the ball on the field the most, not just where they started. This graphic shows a smoothed distribution of how many plays occurred at each spot on the field for each team (GT is in gold, Wofford is grey). The higher the bump the more plays a team had at and near that spot on the field. The top number are just for looks, if you notice the x-axis is distance from endzone, so far right is bad field position and far left is about to score. 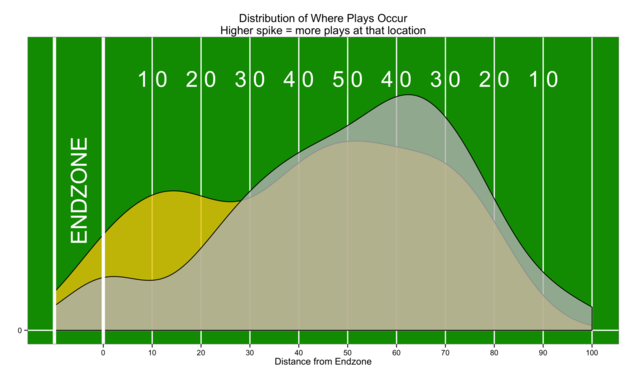 This is something I worked on this off-season. The y-axis is Georgia Tech's chances of winning the game, and the x-axis is time elapsed. Each dot represents an individual play. 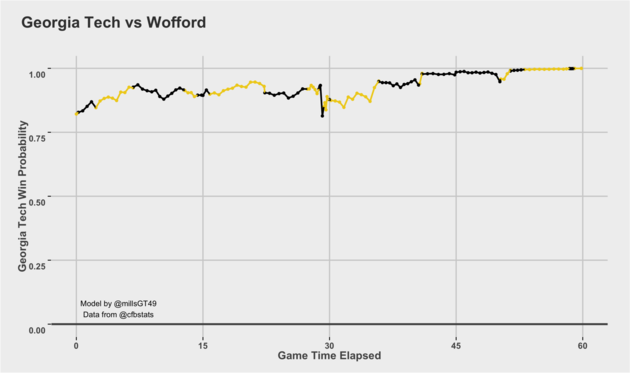 At the end of the day Georgia Tech got a win against a team it should have beaten. There were some good things like our success in the passing game, ability to win the field position battle, and not turning the ball over. But also some things we need to work like our run defense.

Thoughts or comments of your own? Critiques or suggestions for the visualizations? Put them in the comments.