Duff'd It! Rankings and other Accolades, Week 1

ARRIVING IN A HAZE OF UN-GLORY

Share All sharing options for: Duff'd It! Rankings and other Accolades, Week 1

Didn't it feel like this offseason was the longest offseason ever? Too many terrible, terrible events occurred, but now that football is back we can once again allow it to distract us from literally everything else going on in the world. And then the Duff'd It! Rankings can distract you from that once you realize how terrible your team actually is! Unless your team is on the list. If that is the case, I can offer you nothing but more sadness: 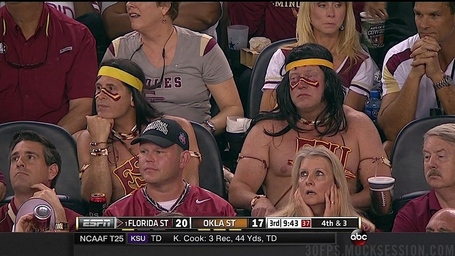 Yes, FSU won their game on Saturday. I figured we'll end up enraging #FSUtwitter eventually so I decided to get it out of the way now. Hi, #FSUtwitter!

5. FIU. No, you didn't fall through a time warp back into 2013 - FIU lost to Bethune-Cookman for the second year in a row. The good news is they only lost by two points this year! One day you'll be a real team, Golden Panthers, but until that happens you'll be living in fear of everyone you face - especially next week's juggernaut of an opponent, Bama Wagner.

(Seriously, Panthers, look into that Mack Brown thing. Y'all can't get any lower than where you are right now.)

4. Wake Forest. How appropriate that the ACC season and the #goacc season would start at the same time! The Demon Deacons and Louisiana-Monroe fought an SEC classic that contained fewer than 500 yards of offense, and Wake Forest almost had 100 of them! I know you're upset about this, Deacs. Just keep saying "we lost to a Fun Belt team in Funroe" over and over to yourselves. It's impossible to stay unhappy if you say it long enough.

3. Vanderbilt. "ANCHOR DOWN," their jerseys said, and when told that wasn't going to fly the Commodores, in true Vandy fashion, produced documentation saying it was kosher. That's about all that went well for them. Mr. C isn't texting his friends here. He's looking for something to ease the pain after watching Vandy commit seven turnovers.

2. Troy. In the college football dictionary, "despair" is defined as "playing a game in Birmingham". (Ask any Pitt fan and they will confirm this.) Getting steamrolled by UAB at Legion Field 48-10 could be the event that launches the Trojans into grief-driven depression. It'll be interesting to see how they are when they get to the bargaining stage. "If Legion Field crumbles into dust, it'll mean the game didn't really happen, right? Right??"

1. Miami.The U is back to reminding everyone they'll be back soon. Meanwhile, they've got a freshman quarterback channeling Jacorry Harris and they're forgetting that third down conversions are things you should attempt to successfully complete. "I'm so sorry, that one third down conversion was a mistake. Here, have the ball back!" You know, maybe we've misunderstood what Miami means when they say they're back this whole time. Maybe it means they're back to where they were in the 1970s? Who knows. I look forward to Miami being back to dominating FCS teams this weekend, and back to being out of the ACC championship by, oh, late October.

Honorable mention: Iowa State. At this point it's too easy to reward a loss to North Dakota State with a spot on the Duff'd It! Rankings. The Bisons' thirst for FBS blood is neverending, and each year they do not fail to quench it. Even after losing twelve starters and their head coach they continue to rain death on all foes, notching their largest FBS victory in their current 5-year streak with a 34-14 victory over the Cyclones. The Bison will happily take your blood money only to then embarrass you, unsuspecting FBS schools, and will continue to do so until they run out of teams dumb enough to schedule them.

Only the first week of the year and we already have a contender for #butts play of the year. Please remember when punting to not punt the ball into your teammate's butt. He will not appreciate it.

Bonus #butts action: BUTTCATCH. This is shaping up to be a good season for butts and butt-related plays.

Yes, ref, find your happy place. Go where you can forget you are about to be dogpiled by multiple SEC defenders. 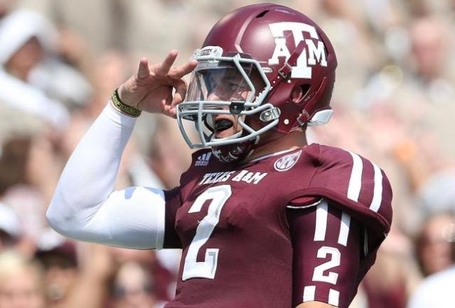 Look at that kid go! After making the surprising decision to return to Texas A&M, Manziel is lighting opposing defenses up like never before, breaking his own records and finishing with 511 yards and three touchdowns on a 44 for 60 passing performance! That's a hell of an opening statement to make for a quarterback looking to win his second Heisman.

So, congratulations to Johnny Foot-

anyone got a permanent marker or something

Erm, so as I was saying, congratulations to Kenny Hill! Your record-setting game against a very good South Carolina team was truly a thing of beauty, and is making us all think that maybe this whole SEC thing is going to work out for the Aggies just fine in the long run. Now please stop trying to rub the marker off the medal it's supposed to say that please just leave it alone-