Duff'd It! Rankings and other Accolades, Week 3

THE #GOACC ROLLER COASTER NEVER ENDS, IT JUST GOES UP AND BACK DOWN FOREVER

Share All sharing options for: Duff'd It! Rankings and other Accolades, Week 3

Week three of the 2014 season is in the books, and boy was it a lot more fun than it promised. On Thursday BYU raced out to a 23-0 lead on Houston before wandering in and back out of the mountains a few times. On Friday you had ritual suicide by Bear in Buffalo. And then on Saturday Georgia lost to Steve Spurrier for the 50th time while the son of Rick Neuheisel won a game and Maryland looked at its photobook of ACC memories and silently shed a single tear. And, hopefully, someone has taken the time to explain to Texas how coin flips work. And man, that Georgia Tech-Georgia Southern game, huh? Sure was a barn burner. I don't know about you guys, but I knew my life wasn't complete without watching Tech blow a four score lead to a Fun Belt team. The scoreboard says you won, Yellow Jackets, but deep inside you know you lost so much more that afternoon.

5. Troy. Hello there, Trojans! You lost to Abilene Christian University on Saturday! Yes, that's second year, provisional FCS member Abilene Christian University, a program so low on the talent scale they lost to Georgia State in week 1. So congratulations, Troy! You are the first program in literally years to be transitionally worse than Georgia State. And you're playing regular Georgia this weekend. Good luck!

4. Louisville. Welcome to the #goacc, Cardinals! Opening the season with a strong win against Miami and then stepping on your own genitals and losing to Virginia? I knew you guys would fit right in. In a game that featured more turnovers than touchdowns, Louisville managed to out-derp the Cavaliers 4 to 3, giving Virginia the edge in the final score and ensuring Eris remains the patron goddess of the ACC.

3. Virginia Tech. It's generally not a good idea to write a long scathing article casually dismissing your upcoming opponent, as a certain unnamed Hokie blog did, because karma tends to slap you upside the head for things like that. East Carolina raced out to a 21-0 lead in the first quarter before showing mercy and allowing the Hokies to take the rest of the game to tie it back up..... then slitting their throats and scoring the game winner with sixteen seconds remaining. Because Pirates.

(That Hokie blog should totally do the same thing with their opponent this weekend, by the way. Why? Uh... no reason... I mean, it's not like lightning strikes twice or anything....)

2. Georgia. IT'S FIRST AND GOAL AT THE FOUR YARD LINE RUN THE DANG BALL BOBO WE GOT THE BEST PLAYER IN THE NATION JUST GIVE GURLEY THE DANG BALL AND LET HIM WORK

VINCE DOOLEY WOULD NEVER HAVE MADE SUCH A SISSY CALL

1. USC. Who knew Boston College used red bandanas to morph into Power Rangers? The Eagles were down 10-0 at the start of the second quarter before summoning the Megazord, going on a 30-7 run, sacking Trojans quarterback Cody Kessler five times, and holding the Trojans to just 20 total rushing yards. USC brought the game back to within a touchdown with less than two minutes remaining, but the BC summoned the power sword and destroyed them.

Honorable Mention: Ball State. Lost a battle against the mighty Indiana State Sycamores. Remember to bring a heartless tin man and his axe the next time you try to fight trees, Ball State.

Other Honorable Mention: Iowa. The Cy-Hawk rivalry took things to a new level when Iowa's police force started the world's first Campus Police Battle, but Iowa State would get the last laugh on a last second field goal.

My, there is a lot to take in on this play.  At first it just looks like the worst fake punt in the history of mankind, but then you dive deeper into this gif and find.....

OH MY GODS, THAT MAN HAS BEEN SHOT! STOP THE GAME! SOMEBODY DO SOMETHING! I CAN'T BELIEVE A PERSON WOULD SHOOT SOMEONE- 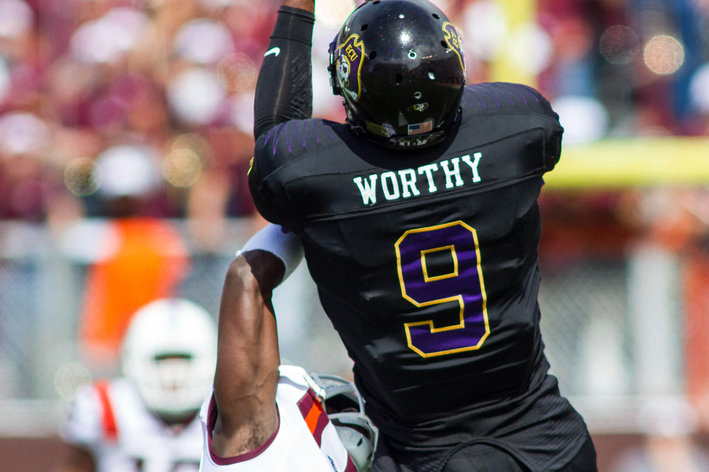 The East Carolina Pirates were in full YOLO mode against Virginia Tech on Saturday, completing just 23 of their 47 passes... but gaining 427 yards on those 23 completed passes, an astounding 18.5 yards per completion. Worthy was the YOLO-iest of them all, piling up 223 of those yards on just six(!!!) catches. No crazy outliers on that stat line either: his shortest reception still went for 28 yards.

So congratulations, Cam Worthy! Here is your....

wait, where did it

*realizes EotMotW award has been stolen*

*realizes watch and wallet are missing*

okay wait who is stealing all of my stuff

*blinks, opens eyes to find he is now on a brig in the middle of the Atlantic*