Taking an in-depth look at the stats behind the game.

Each Week FTRS will take apart the traditional box score and present our readers with the key insights on how the game was played. You can view all the Advanced Box Score stories in the Football Analytics Story Stream. For any questions about the metrics listed below please first refer to the Advanced Stats Glossary for definitions.

Well this one was a doozy. As you'll see below Georgia Tech did a lot of things really well. Unfortunately, there were almost as many negatives. Let's take a look and see what we did well and what will need to improve in conference play. 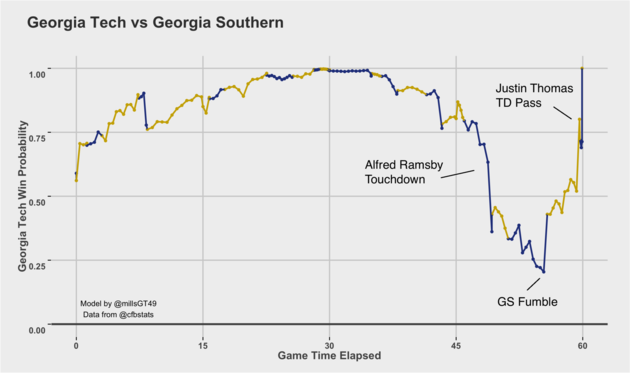 Yup. Home teams up by 25 points at half time can be expected to win more than 99% of the time. And technically, we did. However you don't really envision going from a near certainty to only a 20% chance of winning the game. Here are the 5 biggest plays of the game according to my model:

(*) WP refers to the probability of the offense winning the game.

The game-winning touchdown is predictably the biggest play of the game. A third down conversion to go ahead with less than a minute remaining in the game should be a huge swing in a team's chances of winning. Alfred Ramsby's go ahead touchdown in the fourth quarter was also a huge play, and I'll just note this also includes Georgia Southern converting the two point conversion. The fumble was about the only big negative play for either offense, and man was it huge for us. That was about the only positive for our defense. When we needed it we lucked in to a recovering a fumble.

I honestly thought there was a bug in my code where the 2nd half of the Drive Chart just shows the opposite of the first half, but no, this was just an insane game. 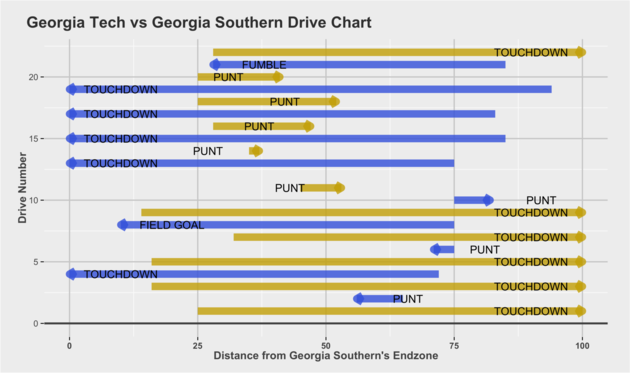 I would say giving Southern such bad field position all night helped us, but they scored anyway! Does it matter that their best starting field position all night was near their own 30 when they scored 5 touchdowns anyway? And our offense has got to avoid that funk though. Its one thing not to score, but the drives we had in the 2nd half were just so short. We gave our defense no time to rest or adjust.