Today, we're statistically examining whether or not there is a particular "skill" involved in recovering fumbles.

Share All sharing options for: Intro to Football Analytics: Fumble Recoveries are Random

This is the second post in our new series at From The Rumble Seat introducing our readers to sports analytics and what we can find out using data. You can view all other Intro to Football Analytics posts in the story stream. Also I would be remiss if I didn't link to the Visualizing Quarterbacks under Paul Johnson post from Thursday in case you didn't see it over the holidays.

Turnovers are a huge deal in college football, and professional football as well. They can swing a game and teams that win the turnover margin win 73% of the time. So judging a team off turnovers is usually a way good way to go. However if you judge a team based off the amount of fumbles they recover, you will be in for a let down later on. Recovering fumbles is a complete crapshoot, but most people know that without using data to prove it. But that is what the football analytics movement is all about; using data to either prove or disprove common held beliefs about the game of football. In this post, we'll prove that recovering fumbles is not a skill. 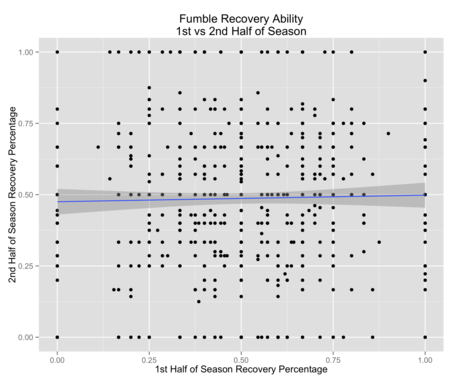 Another way to see if there is a repeatable skill in recovering fumbles is to group each team's plays into even and odd numbered plays (the first play of the game is play number 1, the 2nd play of the game is play number 2, etc...). There should be no biases between even plays and odd plays for a team, unlike splitting by half of the season which can be influenced by teams playing better or players getting injured. So teams that are better at something should be better at it on both even numbered plays and odd numbers plays. Well, the correlation between a team's fumble recovery rates on even plays and fumble recovery rates on odd numbered plays is .007, even less than the correlation between halves of the season. This shows that no matter how you split the data up, there is no repeatable skill in recovering fumbles.

Next Steps or Questions: