Ramblin' Recollections: A Song of Iceland and Firewater - Part 4, Over the Mountains and Through the Lava Fields, to the Hot Springs We Go!

The fourth part of Packerman's epic journey through Iceland.

Share All sharing options for: Ramblin' Recollections: A Song of Iceland and Firewater - Part 4, Over the Mountains and Through the Lava Fields, to the Hot Springs We Go!

We got a late start on Wednesday morning, but this day was supposed to be one of the lighter days on the trip, so no one worried too much. We ate Hawaii burgers at a local café (only $26!) and headed out over the mountains. The drive over the mountains was beautiful, like the rest of the trip, but the fields of ice and snow stretched as far as the eye could see. After about an hour of driving over the mountains, we came to another valley. The mountains surrounded the valley and the low hanging clouds provided for another excellent picture opportunity. We stopped at pretty much every pull off that Iceland provided.

We made our way out of the valley and entered the lava fields. The lava is cooled, and provides an especially rocky landscape. The land is barren except for the heaps of cooled magma all over the place. There are little pockets of smoke that spout up every so often in the fields. We could see a few from the road, but we needed to cross the fields to get to our first stop: Dettifoss. However, it would not be so easy to just stop by and see the waterfall.

We came to the road that takes you to the west side of the falls, and turned down it, right next to a smoking pile of rocks. We drove up the road about half a mile, and were greeted by a big iron bar blocking the roadway. The road was closed off due to ice. After lots of swearing and a general reluctance to follow the rules, we turned back toward the main road. We were supremely disappointed. We decided not to let it ruin our day, and we would just head to our next stop. About 15 minutes down the road, our driver slammed on the brakes. I hadn't been paying attention, and jolted to attention wondering what was wrong. Right in front of us was a small road with a sign that said "Dettifoss Road" and an arrow pointing down it. Our driver looked pleased with himself, and we turned down the road to try our luck.

Luck was on our side that day, because while part of the road was closed, just enough of it was open to get us to the waterfall.  We parked our cars, hiked about half mile, climbed a couple natural staircase of rocks, and made it to the waterfall. 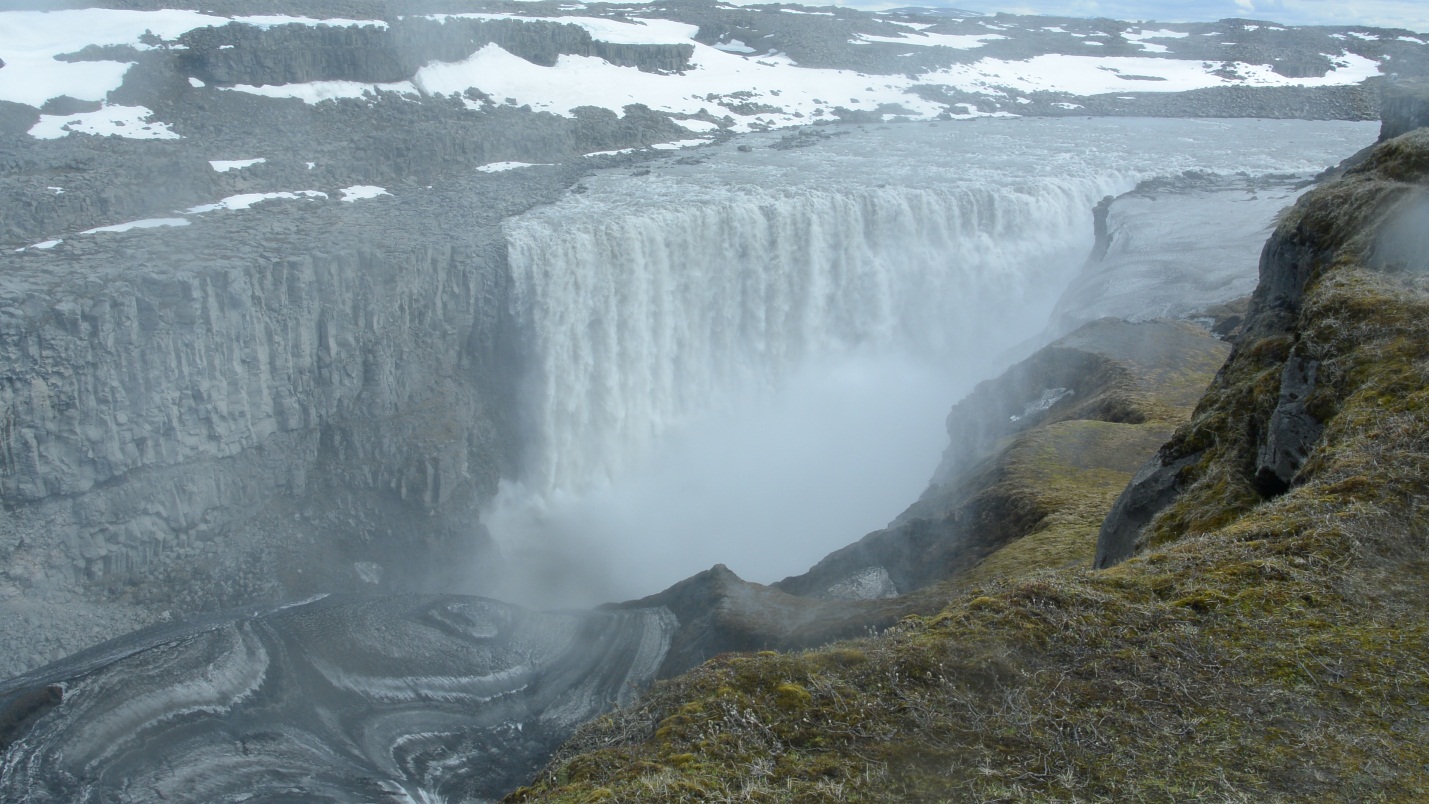 If you've never heard of Dettifoss, you should know that it’s the second largest waterfall in Europe. It’s the waterfall that was used in the opening scene of Prometheus, and it’s enormous. The drop is about 150 feet, but the falls are 330 feet wide. The beast is huge. After taking the opportunity to snap a picture of the falls from about every 5 feet of that cliff, we meandered our way back down the rock staircases and out to our cars. Very content with ourselves, we headed off to our next spot: the Myvatn hot springs.

Along the way, we were treated to more beautiful views, but much like Clemson, this one had a lake! 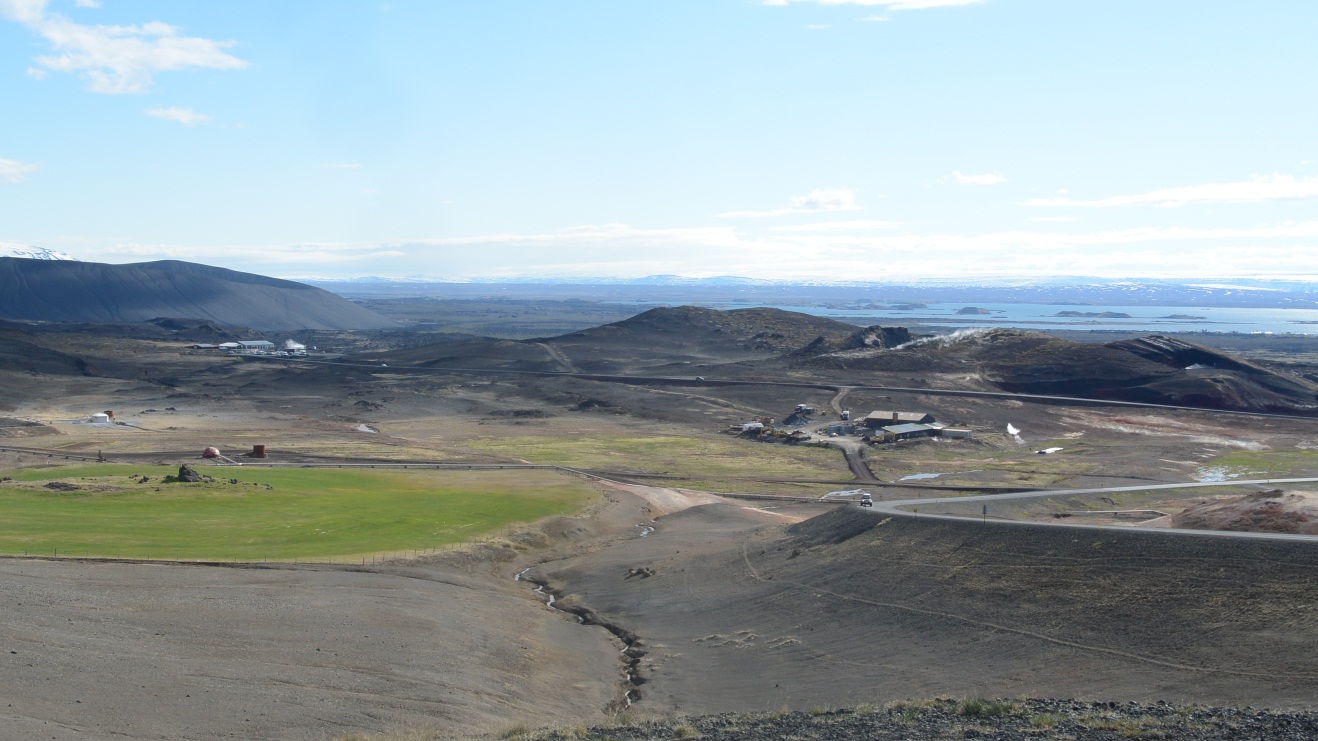 You can see the couple of buildings grouped at the bottom of the hill. Those are the hot springs! The first thing you notice when you pull up to the hot springs is the smell. It smells very strongly of sulfur, and to be honest, we weren't sure we wanted to get in because of it. We decided to suck it up and get in, and it was incredibly relaxing! The temperature of the hot springs is right around 40 degrees Celsius. We met a few fellow travelers, chit chatted for a little while, but decided to head to our next hotel before it closed down for the night. We pulled into the hotel in Husavik, the whale capital of Iceland, and checked in. There was a little confusion about our reservation, but the hotel clerk was very nice about everything and upgraded us for free! We found a restaurant, and once again tried something new. This time it was puffin! Puffin is delicious, and if you can find a town sympathetic to the puffin-eating cause, I highly recommend trying it.

We weren't quite tired after our relatively light day, so we asked the hotel clerk if there was a place to get a drink in the town. There wasn't, but there was an old cheese factory that had been converted into a public hot tub where locals hang out until the tubs drain themselves at midnight. We took our previously acquired liquor and headed up the hill to the hot tubs. One of the other guys and I didn't really feel like getting in the water after having been in the hot springs that day, so we left the group there and headed down to the cliffs to watch the sun set.

After leaving the baths, we headed back to the hotel, hung out for a little while (I’m sure disturbing the entire hotel), and turned in at about 2 AM.