A statistical breakdown of each QB's performance under CPJ, with a helluva lot of graphics.

I was inspired by Grant Heffley's two excellent posts this week on the different styles of quarterbacks that we have had under Coach Johnson. But I am a visuals kind of guy so I set out to try and visualize the differences between the four horsemen; Nesbitt, Washington, Lee, and Thomas. I hope you like charts because I kind of went overboad with them, my apologies if not.

The first thing I want to look at is the distribution of yards gained on all carries by each quarterback. Was one QB a make-or-break QB that either lost 5 yards or gained 30? Maybe one did a better job of not losing yards than the others. The following plot shows just that. The X-axis is yards gained and the Y-axis in each plot is the percentage of carries for each QB that gained a given yard amount. The dashed line in each plot represents a gain of 0. 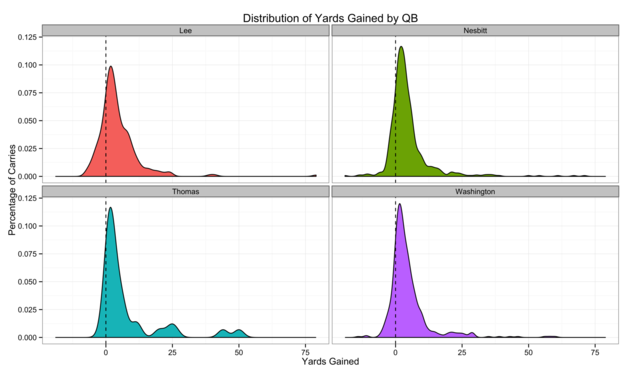 Was there any change in the distribution of yards gained on runs by year for any of the 4 quarterbacks? To make it easier to view the difference by year I have plotted the distribution with a boxplot. The middle line in the boxplot represents the median of the data, with the box representing the 25th and 75th percentiles of the data.The lines extend out to the max and min non-outlier yards gained, with each dot representing an outlier. The smaller the box the tighter the distribution (less variance in yards gained per run) and the closer the middle line (the median) is to one side of the box the more skewed the data is to that side.The dashed red line is the median for all runs, 3 yards. A good example of skew are the runs by Tevin Washington in 2012; His box is very tight and the middle line is to the left of the overall median, which means most of his runs were between 0 and 3 yards. 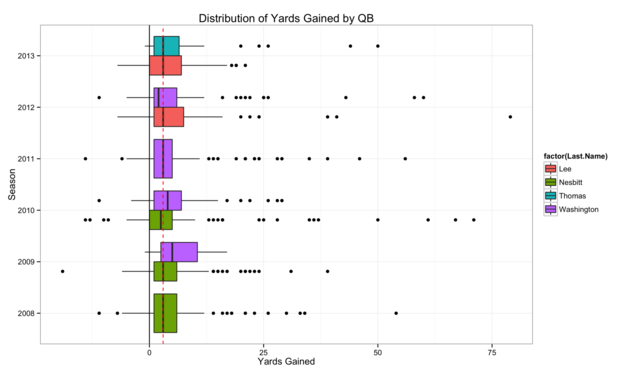 That was all about the distribution of carries; how often did you gain a certain number of yards on each carry. Well I want to look at how good each quarterback was when he ran the ball. Two methods to do that are Yards per Carry and Success Rate. Yards per Carry is exactly that; how many yards do you gain on average when you run the ball. Success Rate is more focused on did you gain enough yards for the play to be successful. This is defined as gaining at least 50% of the necessary yards for a first down on first down, 70% on 2nd down, and 100% (so getting the first down) on 3rd or 4th down. This is a good way to measure "move the chains" running backs. The following plot shows the success rate of each quarterback in each year on the x-axis, the yards per carry on the y-axis, and is broken up by down (except 4th since there weren't that many carries to visualize). The size of each quarterback's name is the number of carries they had on each down. I had to exclude Justin Thomas last year and Tevin Washington in 2009 because they really didn't have enough carries in each down to get a good sense of their performance. 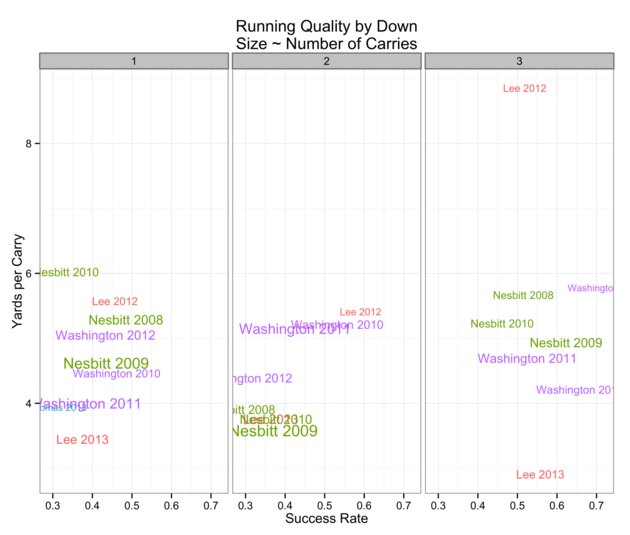 Next I want to look at where each QB's carries occurred on the pitch field. Was someone predominately used in goal line situations in certain years? Did we rely on a QB to move us down field and then let the running backs punch it in? The next plot shows the spot on the field on the x-axis and the percent of the QB's carries that occurred at each spot on the field. It has been split up by year again to allow you to compare QB changes a little better. 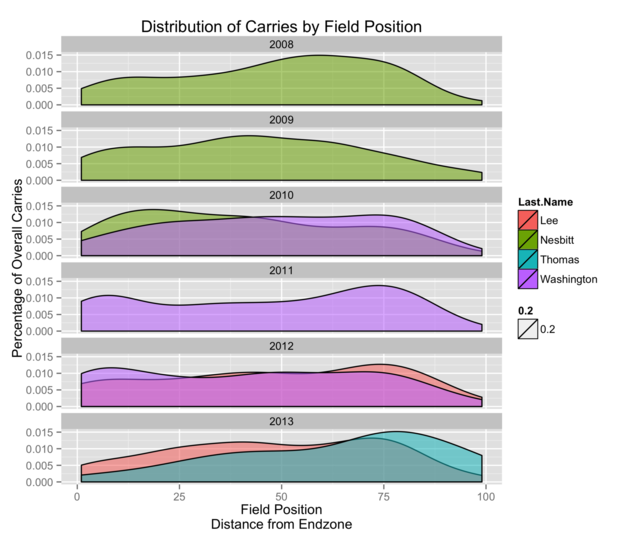 Ok, I think that was about all the running analysis I can handle right now. There is one more stylistic difference I want to explore. And that is, who does each QB throw the ball to? Does one rely on his receivers downfield, or perhaps one is constantly dumping off to his running backs? The x-axis on the next plot is the position of the intended target (so incomplete and complete doesn't matter, just who you threw it to) and the y-axis is the number of attempts. 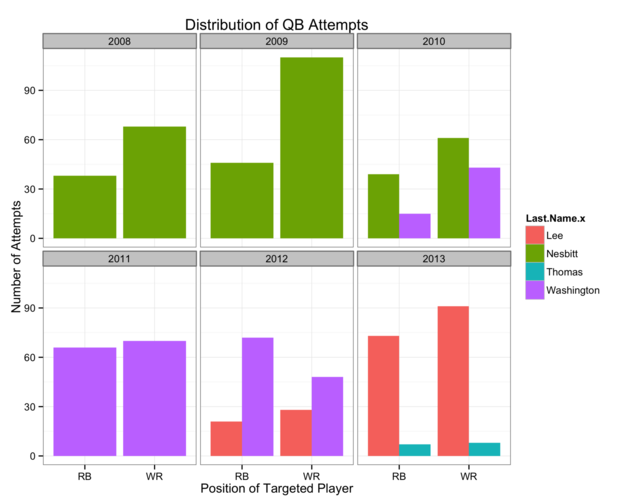 Wow this post got long. Sorry about the dump of graphics, but I really wanted to visualize the differences between the quarterbacks over the years. If there are any other comparisons you would like to see then just let me know in the comments. And obviously please leave any of your observations or criticisms in the comments.