The ACC has a new brand and Georgia Tech has a new target.

Everyone knows the profound impact that soon-to-be Hall of Fame-er Joe Hamilton had on the Georgia Tech football program, but how did the infamous Joe Ham end up on The Flats in the first place? It's and interesting question that the AJC asked the former quarterback during a recent interview. According to the article, Tech was one of the only schools that wanted him to play for them as a quarterback, and because he felt like he was more suited to play as a quarterback than as an athlete (as other schools tried to recruit him to play as), he chose Tech. Seems like a halfway decent decision to me.

Just in case you were fuming over the old ACC logo, rage no longer. Commissioner John Swofford unveiled the brand new ACC logo yesterday, and it looks... almost the same as the old one, just italicized. It is definitely more modern than the old logo, which I didn't think anyone really advocated changing, but it looks a lot more similar than I would have liked. Go big or go home, ACC! This change comes following some major logo changes by other conferences over the past few years, including the B1G, Pac-12,  Big-12, and even... the SEC? That's an interesting choice to put along the perimeter of the logo. I still can't even decide if that is real or not considering I can't find any evidence of it outside of that post, but it's interesting if it is legitimate.

If you were not totally wowed by the new design and fresh branding of the ACC, you aren't alone-- Syracuse's SBN blog has a similar view. Man, I didn't even see that much mediocrity in the new branding until he kindly pointed it out to me, but thinking about it now the whole thing seems really corny. Here's a hint, ACC: whenever you explain what each part of a logo means, you are probably coming across as desperate and lame. Every single color and line on a logo doesn't need some deep meaning. It's football, not Shakespeare. I do, however, like the little inspirational chart (below) detailing the progress the ACC has made or intends to make-- it sums things up pretty well in my opinion. 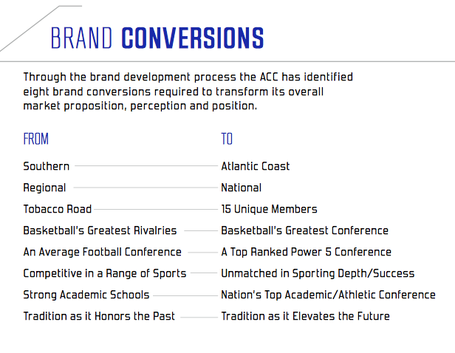 Georgia Tech is thought to be actively pursuing Fred Brown, a two-star  DT out of Louisiana. Brown is currently committed to Louisiana Tech, but according to the article he is still wide open. Because apparently committing to a team is just a temporary deal until you find a better one. Regardless, if Roof is actually recruiting him as aggressively as the article makes it seem, they must see something in him, and I don't doubt that at all--as the article mentioned, Louisiana has been kind to Tech as far as recruiting.

Daily Debate: What do you think of the ACC's new branding? Does it help, hurt, or change nothing whatsoever? What changes to branding would help with the ACC's image?