Duff'd It! Rankings and other Accolades, Week 15

CROWNING THE 2014 DUFF'D IT! CONFERENCE CHAMPIONS

Share All sharing options for: Duff'd It! Rankings and other Accolades, Week 15

Well, here we are, at the end of another amazing, wonderful, glorious season of college football. We laughed, we cried, we saw Ohio State lose by two touchdowns in Columbus to Virginia Tech - heck, we even saw Georgia State win a game.

But alas, the regular season is over. And so we present the final Duff'd It! Rankings of 2014. Everyone hold each other close and we will get through this long winter together.

3. Oklahoma. As has been said before, death, taxes, and Oklahoma State losing Bedlam are the three certainties in life. So of course Oklahoma State - a team still looking for bowl eligibility - beat a top 20 ranked Sooners team to win it this year. The Cowboys took advantage of their second chance on a punt return all the way back to tie OU with 45 seconds remaining in regulation, where they won after the Sooners missed a field goal. Note to Bob Stoops: next time your team draws a running into the kicker penalty at the end of a rivalry game, maaaaaaaaaybe just think about declining it.

2. East Carolina. Innovative idea to run the victory formation when you couldn't actually run all the remaining time out, Pirates. I bet George O'Leary never saw that coming. Just like y'all didn't see the Hail Mary that ensued coming, either.

Oregon 51, Arizona 13. You'd think Arizona might have had an advantage here, accounting for Oregon's only loss of the year, but the Wildcats neglected to remember that if you attack a flock of ducks they will get their revenge by running up 627 yards on your ass.

Alabama 42, Mizzou 13. "D'AWWW LOOK AT THEM TIGGER KITTIES THINKING THEY WERE GONNA TAKE THIS HERE SEC CHAMPIONSHIP THAT JESUS CHRIST HIMSELF DELIVERED TO HIS FAVORITE FOOTBALL TEAM, THE ALABAMA CRIMSON TIDE. NICK SABAN'S GONNA WIN ANOTHER CHAMPIONSHIP, ASCEND STRAIGHT TO HEAVEN, AND BE REMEMBERED FOREVER AS SAINT SABAN. ROLL TIDE!"

Ohio State 59, Wisconsin 0. Well let's just take a look at how the B1G championship is going and oh my gods there is blood everywhere it's in the upper decks and on the ceiling of Lucas Oil Stadium

how did this much blood come from so few Badgers

Honorable mention: UConn. SMU was so unspeakably awful this season they were placed on the Perma-Duff'd! list in Week 5. Spencer Hall declared them one of the worst football teams he'd ever seen. They had the worst scoring offense and second worst scoring defense in FBS. A winless season was guaranteed.

But SMU had one thing going for them: they play in the American Conference, and UConn knows going winless damn sure ain't American. Thanks for playing your part and ensuring no man in your conference (and FBS, as it turned out) was left behind, Huskies! Your country thanks you.

Duff'd It! Conference champions: Baylor and TCU. Alabama, Mizzou, and Arizona all made strong cases to be conference champions this year, but in the end, there was one clear winner. Or rather, two, as the conference of One. True. Champion.* instead named two, and was left with No. True. Playoff teams. Big 12 commissioner Bob Bowlsby's plan to hedge his bets and maybe sneak two of his league's schools into the College Football Playoff backfired spectacularly, and so for the next year the Duff'd It! Conference title belt lies in your possession, Bears and Horned Frogs. It's up to you to figure out who gets it on weekends.

Yes, SMU, run the fake field goal - pooch kick play. Maybe everyone will be so confused they'll let you pick it up and run it in for a touchdown. I never thought I'd see a team miss Garrett Gilbert, but that's where you are, Mustangs. 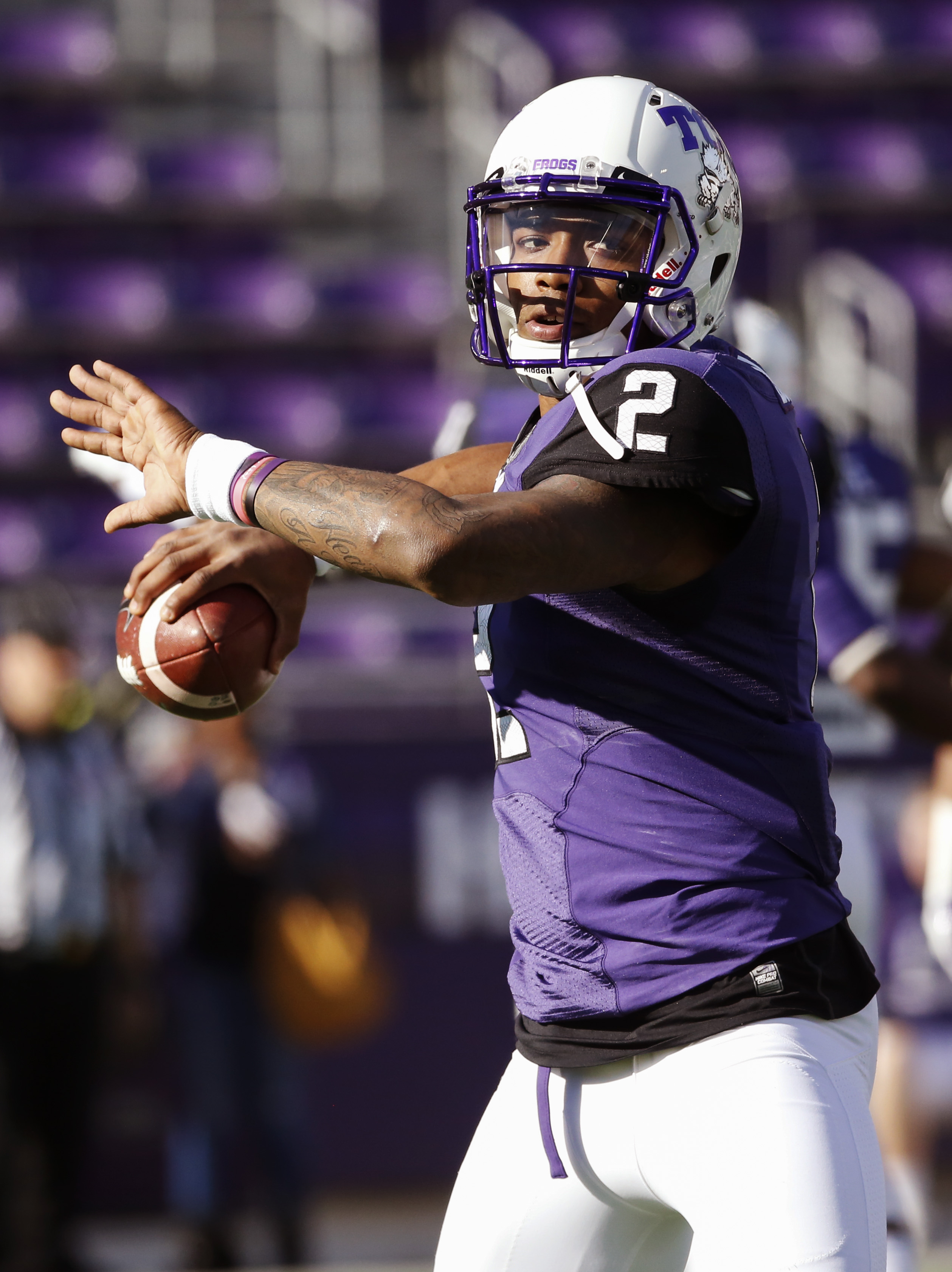 Trevone Boykin had a statement game on Saturday, almost as if he was trying to singlehandedly lift TCU into the playoffs. Sure, it was against a terrible Iowa State team, but the man completed 30 of his 41 passes for 460 yards and four touchdowns, and added 44 yards on 8 rushes for good measure. On a short weekend slate, Boykin easily had the most impressive performance.

So congratulations, Trevone Boykin! Unlike the Big 12, you are the One. True. Winner. of the final EotMotW award for 2014. Unfortunately, it does not come with a ticket to the College Football Playoff. But hey, get commissioner Bowlsby to add BYU and Cincy, or BYU and NIU, or NIU and Kent State, or Saint Mary's and Duquene - heck, any pair of schools to get the Big 12 back to, you know, twelve teams - and you could be in next year! Just get your quality loss in early.