Taking a look at film from Miami going into the key matchup on Saturday night.

I looked at game film from the Miami-Louisville game to get a grasp on the UM offense and some of the things the Cardinals did to stop them. Let's take a look.

Louisville dialed up blitzes on third down all night and caused Miami to go an awful 1-13 on third downs. Freshman Brad Kaaya struggled to get comfortable to step up and make big throws.

On the first drive, Miami runs a designed roll out to the left, which is pretty strange considering the setup of Lousville's defense. The linebackers pursue Kaaya once he rolls left, and he makes a weak throw short of his receiver. 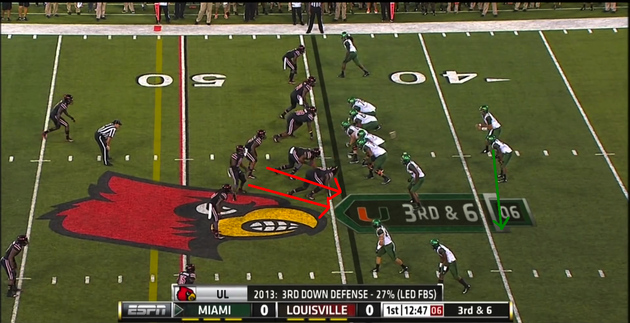 Later on in the first quarter, Louisville blitzes again on third down. This time they send both outside linebackers and the middle linebacker. Kaaya does a nice job stepping up, but he still gets pressure from the MLB and forces another bad throw short of his receiver. 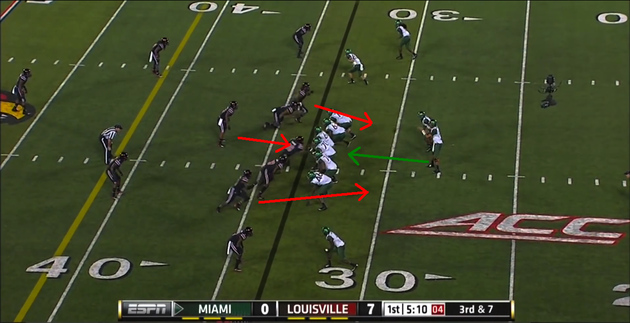 In the second quarter, Miami faces another third down passing situation. Todd Grantham makes another good call by showing Kaaya a blitz he hadn't seen so far in the game. The Cardinals send a slot corner and outside linebacker and the middle linebacker slides back into coverage on the left side. Kaaya eyes the receiver in the left slot the entire time and makes another pressured throw into coverage. 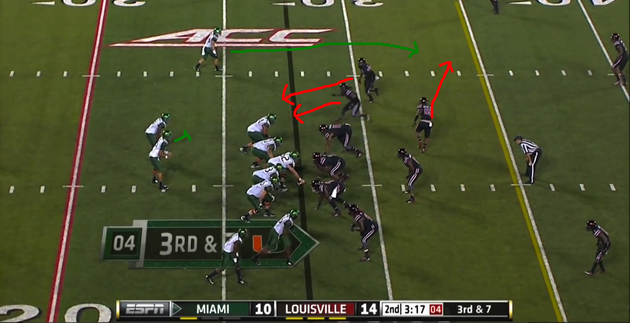 Louisville was keyed in on the run all night. Their game plan was to not let Duke Johnson beat them, and they did a great job with that. This meant they blitzed often, and their linebackers were very aggressive to the ball. That did cause some successful play actions by Miami that gained big yardage. The Georgia Tech defense will have to be careful to not key in on the run too much and leave open receivers downfield.

Early in the second quarter, Miami faces a 2nd and 16 in Louisville territory. Kaaya fakes a handoff to the fullback, and the tight end releases in the secondary. The UL corner is responsible for the route ran by the UM tight end. 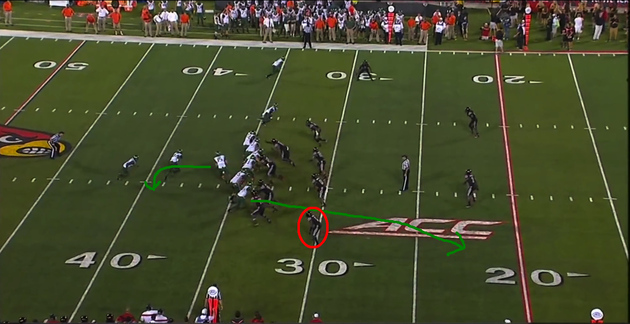 After the fake, the UL corner jumps right to react to the run, and gets out of position for the wide open Clive Walford. Kaaya delivers a perfect throw under pressure for the completion. 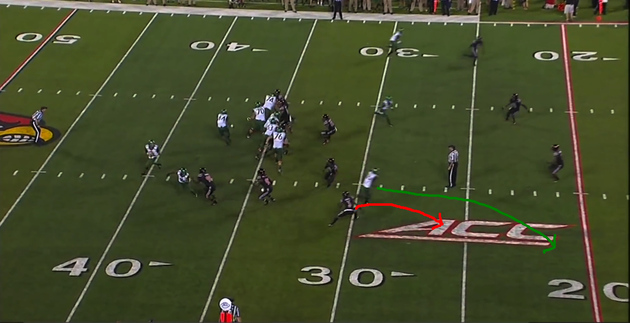 Directly after the last play, Miami lines up in a goal line set and fakes the handoff to Johnson. Clive Walford once again leaks out. 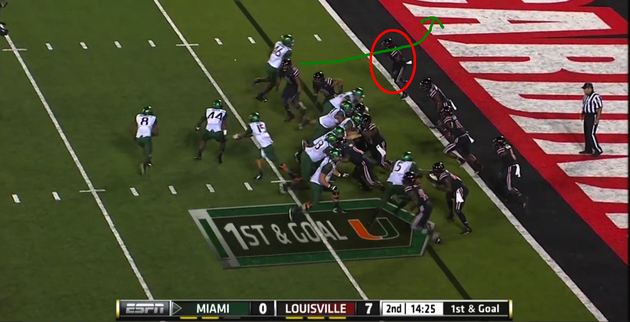 The Louisville player once again reacts heavily on the play action, and Walford is wide open for the easy touchdown throw. 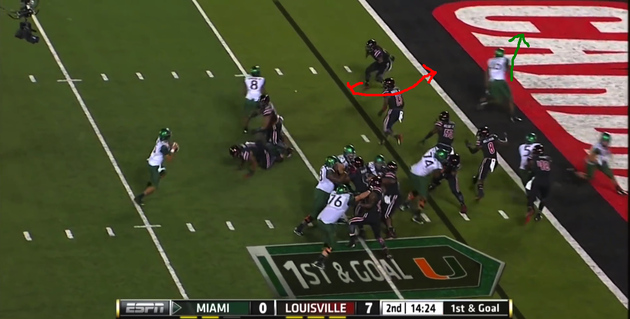 On the next drive, Miami once again gains big yardage on a play action. Kaaya fakes the handoff to Johnson and wide receiver Phillip Dorsett runs a skinny post from the left side of the field. Louisville seems to be in a zone coverage. 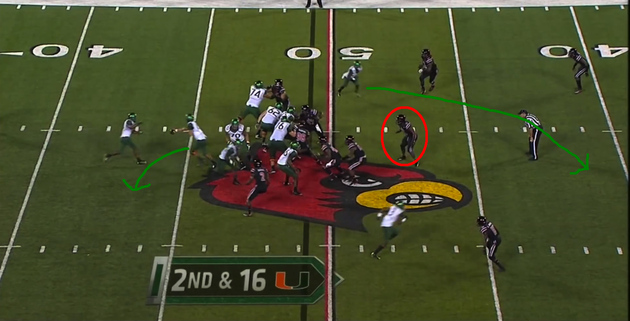 The UL linebacker jumps forward just enough for Dorsett to find a hole behind him in the zone. The UL player retreats but can't quite make the ground up to stop the completion for a nice gain. 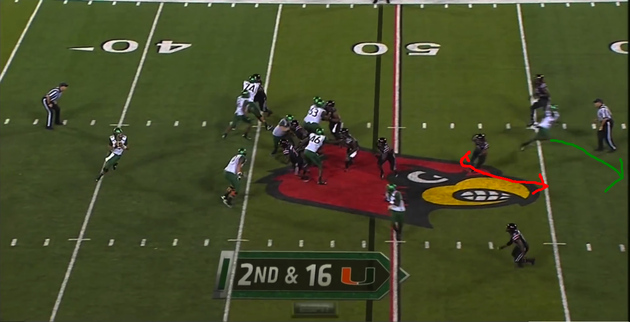 Brad Kaaya has made some nice plays in his freshman year, but he's shown plenty of evidence that he is just a true freshman. To go along with some questionable decisions so far, Kaaya has shown some bad footwork along with being jumpy in the pocket.

On this play, Kaaya fakes a handoff right before rolling out to the left. Kaaya uses slow footwork to get turned around in ideal throwing position. Before setting up to make the throw, Kaaya is completely open before attempting to square up. 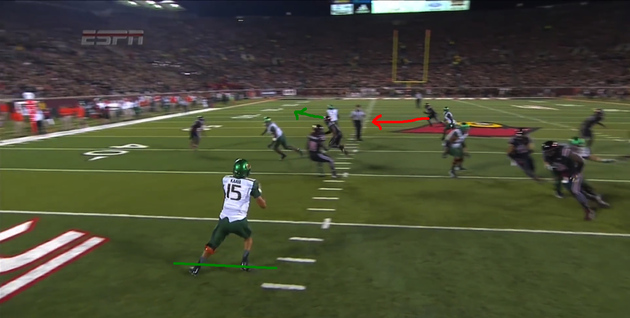 Kaaya sees he has a wide open receiver, but since he isn't in good position to square up and make a strong throw, he quickly attempts to pivot his right foot and get his left leg around to plant and make the throw. This causes him to be too open on the lower half, and he makes a bad under throw and gets intercepted. 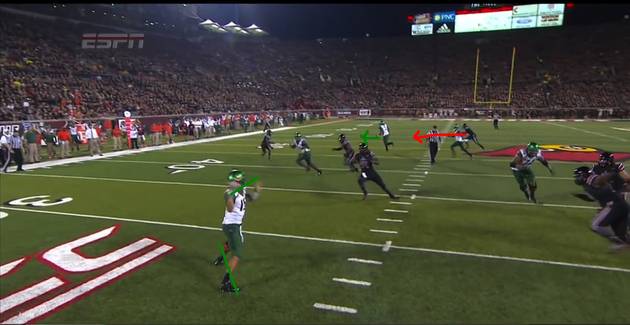 Miami does some nice things on offense, but it's mainly centered around Duke Johnson. If the front four can make a few big stops, and the linebackers can make good reads to limit the big play, Tech should be able to limit the offense enough to win the game. Miami will try to run it early and often and then use play action to try to catch the defense off guard. The secondary has to hold their assignments and not get overly aggressive and allow the big play over the top on those play actions. Miami will be missing two offensive lineman from the right side in this game after they were injured against Duke. I expect Ted Roof to blitz often on second and third and longs to force some mistakes from the freshman quarterback.