Duff'd It! Rankings and Other Accolades, Week 5

RETURN OF THE ANGRY VISOR

Share All sharing options for: Duff'd It! Rankings and Other Accolades, Week 5

Last week, after beating Vanderbilt, South Carolina Steve Spurrier started postgame presser by saying "that was a game I didn't like a bit." He went on to say they way the Gamecocks played was "embarrassing," but owned up to it, saying he was "the coach of this embarrassing group of guys." He reiterated several times that his team was not a good football team.

HIS TEAM WON. HE SAID THESE THINGS AFTER A WIN.

Spurrier's press conferences are going to be real fun the next couple of weeks...

5. Army. For years we all thought FBS teams didn't schedule Ivy League teams because any such victories wouldn't count towards bowl eligibility. As it turns out, FBS teams are just scared. Yale's Tyler Varga rushed for five touchdowns - including the equalizer with 1:42 remaining in regulation and the winner in overtime - to help the Bulldogs beat the Black Knights 49-43. This is a sad political commentary on how our future leaders are going to crush our future armed forces members, isn't it?

4. Boston College. The first three weeks were a magical time to be alive, weren't they, Eagles? An exciting but promising loss to Coastal contender Pitt followed by a memorable upset over USC. Wave that ACC flag proudly, BC! How've you been doing since then, anyway? You've got a win over an FCS school, okay, and....

2. Penn State. The Nittany lions were held to six points, 50 rushing yards, and 3 for 17 on third down conversions by Northwestern and hold on I'm talking about Northwestern having a good defense I need a minute I think my hands are melting-

Okay, everything's good now. Yes, Penn State lost 29-6. To Northwestern. At home. But don't worry, Penn State fans, James Franklin isn't looking to move out quickly like the last guy. He's in for the long haul. Is that reassuring? It's supposed to be reassuring.

Wait. Okay. Yes. Both teams play in Columbia. But in their respective states, not.... you get the idea. After doinking their chance to knock off the Gamecocks last year, the Tigers punched the ball in on a 1 yard run and stuffed the SC defense on the following possession to ice the game. When asked for comment, Steve Spurrier simply covered his eyes and muttered obscenities into his visor.

Perma-Duff'd and ineligible for the remainder of the season: SMU. The Mustangs were held scoreless again vs. TCU on Saturday. That's twice they've been shut out, and thrice they've not scored a touchdown. And it doesn't get better, SMU, because look who you're playing next. (Hint: Purple. Eyepatches. Flaming cannon shot death.) The Duff'd It! Rankings will not be writing about the SMU Mustangs after this week, because after Saturday they will all be dead.

(On the bright side, Dallas, the other local football team is here to lift your spirits. That's right, the University of North Texas Mean Green will save you. #goMeanGreen)

Perma-Duff'd and ineligible for the remainder of Brady Hoke's career: Michigan. Losing 30-14 to Minnesota in the Big House sounds like pretty much the worst thing, doesn't it, Wolverines? (Or at least since losing to Appalachian State.) But even worse than having a crappy team is having a crappy coach, one that is either so ignorant or apathetic about the condition of his players that he'll continue to play a clearly concussed player, even when every other player, fan in attendance, and the ESPN announcers calling the game could tell what had happened. The response from Michigan head coach Brady Hoke and athletic director Dave Brandon has consisted of some of the most chickenshit buck passing and blame dodging imaginable. These two will not be fired as soon as they should be, because as of the time of this writing they are still employed. Their deplorable treatment of Shane Morris endangered his life, and damaged the entire sport of football. Do the right thing sooner rather than later, Michigan.

ACC Conference play of the week

The goalposts mock your effort to salvage this disaster of a play, Trevone Boykin. Your desperation heave to avoid a safety was doomed from the beginning, as you had already stepped out of the endzone, but the goalposts remained to add insult to injury.

And none of this even mattered, because SMU jumped offsides, rendering the play dead on arrival; and also because life is short and we will all one day rest in the ground. (Even crueler: this mistake erased what would have been SMU's only points of the game, and only their 13th and 14th point all season. This depressive spiral doesn't end anytime soon, SMU. Just ask Cowboy fans.) 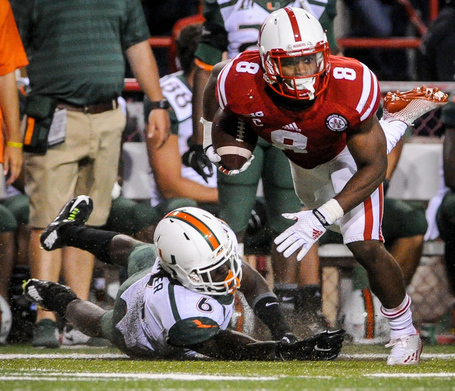 Cincinnati's Chris Moore averaged 74 yards and one touchdown per reception vs. Ohio State on Saturday, an absurd stat even considering he only had three catches the entire game. Unfortunately, the rest of his team didn't match him in either yards or points and Urban Meyer's transitive losers to Georgia Tech beat the Bearcats 50-28.

So we looked elsewhere in the B1G and found Abdullah, who turned out 208 yards and three touchdowns on the ground on 22 carries against Illinois late Saturday night, raising the question: if someone rushes for over 200 yards against the Illini in the middle of the night, and they help by defending like this, did it really happen?

Abdullah says "shut up, fool, this fake medal for this fake award totally proves it happened".