Note: This game is being picked at 2pm Thursday. By the time you read this, I will have either made myself out to be a genius or an idiot.

I gotta tell you, I'm really torn here. I wholeheartedly believe that the Jackets will win, but I can't possibly see this game being a shootout. As bad as the Hokies' offense is, and as good as their defense is, this will be a low-scoring game, making 7.5 a dangerously high line. However, I like to live dangerously (if you know me IRL, you know how ridiculously untrue that is), so I'm taking the Yellow Jackets to win and cover the spread, 21-13. I'll be impressed if the Hokies manage more than 13, and I'll be impressed if the Jackets manage more than 24. To prove that I made this prediction yesterday afternoon, here's where I tweeted about it.

South Florida is 0-3, and have looked awful all year. Heck, they started the year with a 32-point loss to McNeese State. You know you've hit rock bottom when... All that said, I think we learn something about Miami in this game. Yes, they have to go on the road, and yes, 18.5 is a large spread, but USF has no business sticking around in this game even until halftime. However, knowing Miami, they're the type of team that could make a game out of one that shouldn't be. We'll see if the Hurricanes can put away a far inferior team early on, or if the Bulls can stick around long past their welcome.

Again, interesting game here although it really shouldn't be. The Pirates have already showed us that they can hang with ACC-level competition, staying within 5 points of Virginia Tech. UNC should be superior, but are coming off of an embarrassing loss after they talked a bunch of crap beforehand and had a 2-score lead just before halftime. This all depends on how UNC comes out. If they come out angry and ready to blow off some steam, ECU will try to sneak out to the bus at halftime. If they come out disinterested and unfocused, you could see a remix of the Georgia Tech-MTSU game that definitely never happened last year. I'm guessing it'll be much closer to the former.

This one's tricky, because Virginia might be the one team we know the least about in the ACC. In 3 games, they won a very sloppy and weird game against BYU, got blown out of the water by a far-superior Oregon team, and blew a far-inferior VMI team out of the water. Meanwhile, Pitt burned me last week on a 5-point spread by allowing 55 points to Duke, and I'm still a little bitter about that. My strategy in picking this game is that Pitt is at home after scoring 55 in a conference game, while Virginia hasn't played a good game against an equally-matched opponent all year.

Troy's not a very good team, and they travel to Durham to take on a team that's ready to win after two straight conference losses at home. I'm guessing Duke takes this opportunity to take out some frustrations. 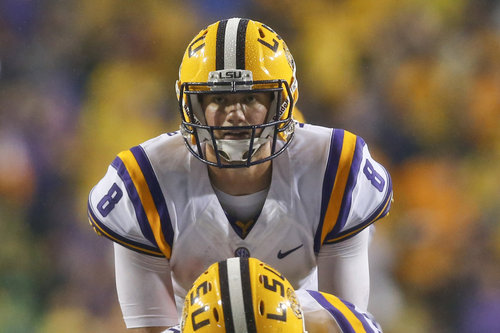 Zach Mettenberger returns to Athens wearing LSU colors for a huge Top 10 matchup. The Tigers' offense looks much better than in recent years, but both defenses are a few notches down from last year. I'll begrudgingly take the home team to cover (purely because they're the home team), but this game very well could come down to who has the ball last. uga covers 3.

This one's tempting. Jameis Winston is the real deal at quarterback for the 'Noles, and even Pitt couldn't keep it within 23 at home in their ACC debut. But really, can they cover that huge spread again? We'll say this: Boston College is yet to score more than 24 in a game this season (and was held to only 7 by USC a couple of weeks ago), while Florida State has scored at least 41 in each game so far. There will be offensive fireworks on display in Chestnut Hill, but my guess is they won't be from the guys wearing Maroon.

Mama always said, "Life is like NC State football...you never know what you're going to get." You really don't, for what it's worth. One week, NC State needs a last-second field goal to beat Richmond, and the next they're a bad call away from potentially upsetting Clemson. This week they take on Central Michigan, whose only win in their first 4 games came after they scored 17 straight points in the 4th quarter to beat FCS New Hampshire 24-21. Fire Up Chip isn't good at much this year, but this line is too much for comfort when considering we're talking about NC State.

If you try to keep your children away from violence and gore, you might want to block this channel for 3 hours on Saturday afternoon. Clemson's at home taking on a very bad Wake Forest team who hasn't played anyone yet who's particularly good, and yet is 2-2 and ranks in the bottom 40 in passing, rushing, and scoring offense. This is going to be a bloodbath.