Opponents and times are finalized for the Georgia Tech Yellow Jackets. Brian Gregory and his young crew are looking to improve once again this season.

Here is the Men's Basketball schedule for the 2013-14 season: 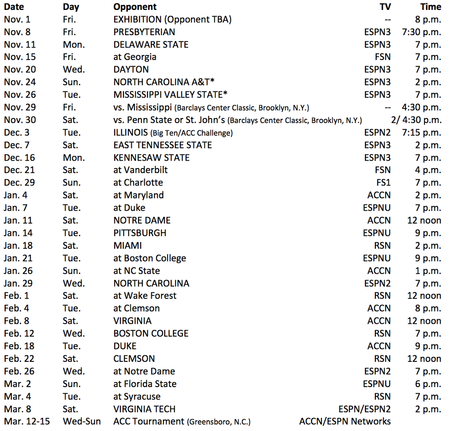 To explain this a bit, all CAPS games are at home. Check out Ramblin' Wreck website for a better looking schedule.

Now let's break this down a bit:

Beginning of the Season

The Jacket's will open their season with 6 out of conference games prior to their pre-season tournament Barclay's Center Classic. For these games, I personally believe that this is similar to what Gregory did last year with his out of conference schedule, VERY easy. That being said, there are two defining moments for this team during these first 6 games- Dayton (Gregory's old team) and uga (duh!). It's important to note that during the first three normal season games, Chris Bolden will be absent from the court due to his mandated team punishment.

If I had to project the Jackets performance during these games, I would hope that the Jackets enter the pre-season tournament 5-1. I think the dwags are an easy opponent for the young and improving Tech team, however I see the Dayton game being a frustrating one for Gregory and I wouldn't be surprised with a loss here unfortunately.

As for the Barclay's Center Classic, I honestly never give too much weight to pre-season tournaments. THAT BEING SAID, I am really excited about this tournament this year. First of all, this is a marquee event in NYC. Second, these teams they are playing are similar caliber to Gregory's team in my opinion. I believe that these will be a great litmus test for the season expectations and the required improvements before the Jackets enter conference play. Ole Miss, Penn State and St. John's... This is going to be some good basketball.

Leaving the tournament, the Jackets get revenge on the strong Illinois team from last year during the ACC/Big 10 Challenge. This year, we're at home. For those of you that did not catch this game, the Jackets were competitive until the last 8 minutes of the game when Mfon went down with a hazardous drive and twisted his ankle/foot. The young team could not keep up with the strong Illinois offense and ended up losing the game. I was very impressed with the first 32 minutes of the Tech team last year, and an upset would motivate the Yellow Jackets for conference play.

Out Of Conference (OOC)

Four games stand between the ACC/Big 10 Challenge and conference play. These are cake games again, however there is a BIG difference between last season's OOC schedule and this year. Unlike last year when the Jackets played 9 or so OOC games AFTER their preseason tournament, this season we have spread out these OOC games before and after the pre-season tournament. Most of you are probably thinking, "Who cares!?" Personally, I think that breaking up these cakes games allows for the team to stay motivated and playing with high caliber focus. By the end of last OOC schedule last season, I thought that the team looked flat and bored. I am excited for this schedule.

Now to ACC play. I want us to talk about this more in the comments so I will leave this brief. However, whoever made this schedule needs a pay raise in my opinion. For me, when I value a schedule, the most important aspect of the season is keeping the toughest games at home. This removes the "advantage" of home court from the top teams and give Tech a competitive edge. For example, most basketball analysts will add between 7-12 points to a home team's score for "home court advantage" when projecting scores. Last season, Tech had 11 conference games decided by 10 or less points, and the Jackets won only half of them. I believe this home court advantage during these important games will be key to the success of the season.

We have kept most of our difficult games at home in McCamish this season. Only Duke, NC State, Notre Dame and Syracuse are concerning away games in my opinion. Other than those games, I believe that all other away games are winnable. We play Duke, Notre Dame, Boston College, and Clemson twice. Tech "away only" games are against NC State, Maryland, Wake Forest, and Syracuse. The two struggles will be NC State and Syracuse. Our "home only" games are against UNC, Miami, Pittsburgh, UVA, and VT. All 5 of those teams are concerns for me and the fact we only play them once, as well as at home, is great.

To summarize all of that, I see the Jackets entering conference play with less than 4 losses. I think Gregory did a great job in making sure that the Jacket's did not rack up extra OOC losses against teams we should not lose to. Assuming that is the same this season, we could enter ACC play with only 2 or 3 losses. When the Jackets enter ACC play, we will have to travel to Duke, Syracuse, Notre Dame and NC State and have a great showing at home against UNC, Miami, Duke, Pittsburgh and Notre Dame.  All things considered, this could be a lot worse.

What do y'all think? Happy with the basketball schedule? Which games are going to be the toughest? Can the Jackets go the distance and make the Big Dance this season?