The Week That Was for GT's Opponents: Week 4

A Stats Run Down of our Opponents.

Share All sharing options for: The Week That Was for GT's Opponents: Week 4

If you are interested in how each opponent did this week then please read the AJC's recap.

F/+ ratings are a combination of play by play metrics developed by Bill C. of Football Study Hall and by drive metrics developed by Brian Fremeau of his own awesome site. A higher F/+ ranking is better and I've done my best to color code it and label it. Here is a graph of our opponent's weekly F/+ rating. This still includes preseason projections and half of it only includes FBS games. And remember the weeks are the F/+ ratings GOING IN TO that week. 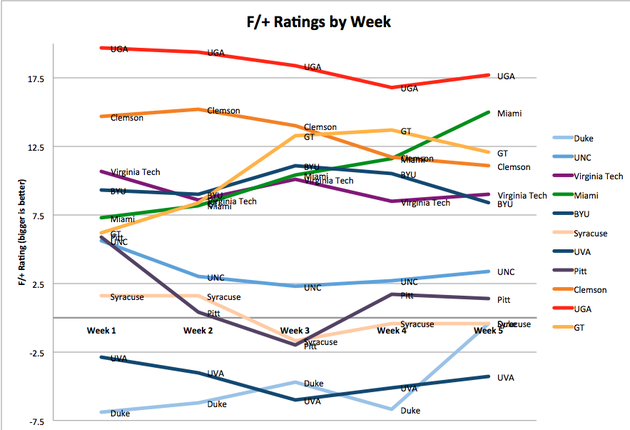 I'll keep updating this table each week. This is the basis of opponent adjustments; how well you performed against your opponents relative to how everyone else performed. As we get more common opponents we can start putting our performances in context. Look at how great VT's defense has done this year compared to our other opponents. In addition Pitt did almost as well as we did against Duke's defense, which is kind of troublesome depending on how you view Pitt's offense.

Again, this chart will get updated with more information as each week passes. I think by the end of the year all of this information will be really cool to have. What do you guys think? Any other information you want on our opponents?