Duff'd It! Rankings and other Accolades, Week 4

Share All sharing options for: Duff'd It! Rankings and other Accolades, Week 4

This weekend was another slow one in the House of Duff, with one of the most boringest schedules in recent memory and zero carnage occurring in the top 25. Fortunately, there always seems to be just enough derp in supply. Who are the lucky few who managed to embarrass themselves this week?

5. Kansas State. Now has losses to North Dakota State and Texas, and it's hard to determine which is more embarrassing. At least the Bison haven't given up 550 rushing yards to anyone this year. Legendary Texas slayer and coaching royalty Ron Prince isn't walking back through that door, Wildcats.

4. Arkansas. Lost to Rutgers 28-24 after being up 24-21 late in the third quarter, and Wisconsin fans all throughout Madison yelled "Karma!" between drinking beers, because even when piss drunk Wisconsin fans understand the concept of karma better than Bret Bielema's wife.

3. Louisiana Tech. Congratulations, Bulldogs! You're on the list of teams empirically worse than both Tulane and Kansas. (That list is otherwise completely empty.) In some parallel universe, LaTech accepts their 2012 Independence Bowl bid, creams Louisiana-Monroe, holds onto Sonny Dykes, and is this year's potential BCS buster.... hey! Wake up Bulldogs; that's universe B and this is universe A and Skip Holtz is your coach now. Sorry.

2. West Virginia. The couches of Morgantown are safe for another week! It turns out Maryland is a much better team when they're not playing their fifth string quarterback (incredible!), despite having a roster that's roughly 83% walkons and freshmen. Randy Edsall has trouble keeping players in Maryland, see, much like how Dana Holgorsen has trouble not thinking about that big jackpot he's about to hit at the casino.

1. FIU. If losing to Bethune-Cookman by three touchdowns was rock bottom, the Panthers are now subterranean. Louisville-FIU and Ohio State-FAMU seemed like a contest to see who could drop more points on their horribly outmatched FCS opponent, until one remembers that FIU supposes to play FBS football. It probably doesn't get worse than a 72-0 result - where FIU may or may not have asked for a running clock in the third quarter - but Ron Turner is still your coach, Panthers, and you're stuck with him for a while. Or maybe you'll replace him with Mack Brown! I hear he might be available soon.

Honorable mention: this entire weekend, because it was mostly terrible and will likely be completely excised from end of year montages. Someone will ask, "hey, where are the week four highlights" and the only response will be "there weren't any, because week four was actually just a fever dream".

That's a poor block, ref. Gotta know the route, keep your eyes downfield, and brace for the hit. Here, let LSU ref show you how it's done.

(Confession: It was extremely tempting to just post a link to the first half of Florida-Tennessee, whose opening minutes were played under thunderpstorm conditions that saw the first five drives all end in turnovers. However, in a rare anti-duffing, Florida lost their starting QB for the season and actually appeared to play better as a result. Kudos, Gators!) 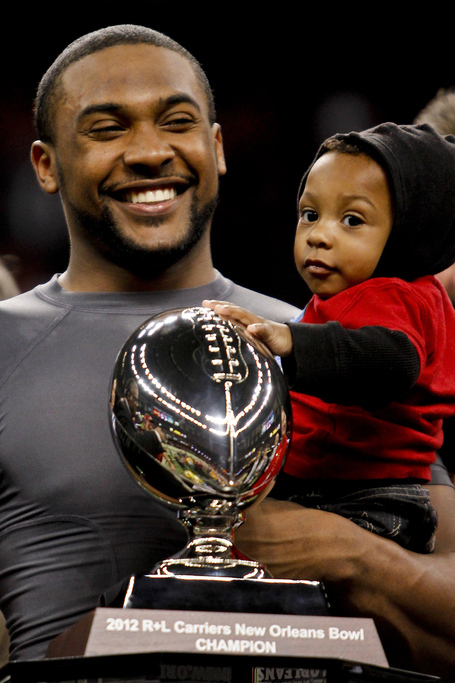 Broadway earned all the boiled crawfish, gumbo, and fried alligator allowed by the NCAA after carrying the Ragin' Cajuns to a 35-30 win over Akron: alone, he helped account for 373 of the Cajuns' 460 total yards and all five of their touchdowns, throwing for 305 yards and three touchdowns, and rushing for 68 yards and the other two touchdowns.

The runner up is QB Brett Smith of Wyoming, whose 373 yards and four touchdowns in the air plus 138 yards and another touchdown on the ground helped the Cowboys easily beat Air Force. Smith would have been the winner this week, but it's hard to think of Air Force-Wyoming without remembering the infamous ending of last year's game, and that just makes everyone uncomfortable.

So congratulations again, Terrance Broadway. Your imaginary all-you-can-eat Cajun food ticket may be redeemed at any point before your eligibility expires. Of course, using it (if it existed) would also likely violate your status as an amateur. Yes, this was all the NCAA's idea. Try to act surprised.