After a Week 3 that was very good to me, I'm looking to keep the momentum rolling.

Georgia Tech's secondary gets a lot of action against the UNC passing attack after the front 7 keeps them from getting anything going in the rushing game. The offense continues to score with relative ease, and Vad Lee gets even more settled in as the starting QB. The streak of covered spreads lives!

NC State is always that pesky team in the Atlantic Division that will knock off teams that it's not supposed to. That's over though, after it took 10 straight second-half points, including a field goal with 33 seconds to play, to beat FCS Richmond at home 23-21. Clemson is too good to be challenged here.

What I know: Virginia Tech will NOT cover 11 in this game. What I don't know: Who will end up winning. I'm going to say that the Hokies are able to make this one happen in the end, but I can't see it being a double-digit win based on what we've seen out of Blacksburg so far.

Let me remind you that Wake is a pretty downright terrible team, especially on offense. Now consider that they're allowing nearly 4 yards per carry on the ground, Army loves to run the ball, and the Deacons are playing on the road, and this is a recipe for disaster. 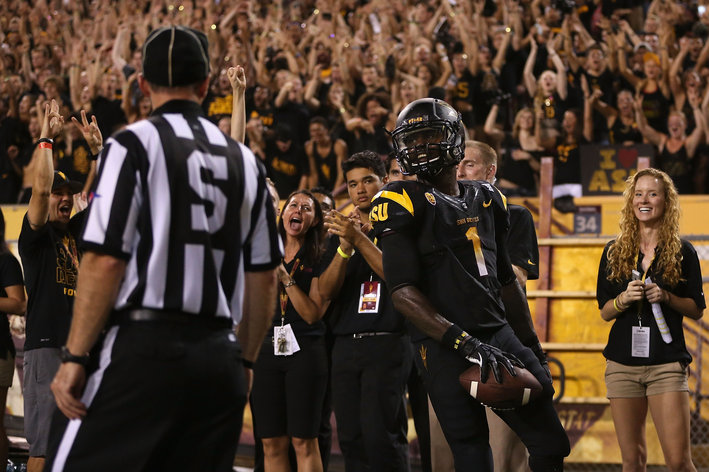 The Sun Devils are riding high coming off of their emotional and controversial win over Wisconsin. They'll take on Stanford, who will be seeing their first of many challenges. The Cardinal haven't exactly been a powerhouse in wins over San Jose St. and Army, but their best days are ahead. In a defensive battle, I'll take the Cardinal at home. Stanford covers 6.

Someone in Vegas really likes Duke. Pitt will roll against Duke, with the only question being whether they'll beat Georgia Tech's 24-point margin of victory.

Tulane (2-1) has the better record against Syracuse (1-2), but the Orange have faced far stronger competition. Combine that with how tough Syracuse plays at home, and I've got confidence that it'll go their way.

If you had told me before the year that Maryland would be favored in this game, I would wonder if West Virginia had gotten a bad case of dysentery. However, the spread correctly represents who the better team is here. The Mountaineers have been pretty bad this year, and will feed into the Terrapins' continued streak of good play.

In recent years, I wouldn't have expected LSU to beat most anybody by 14 due to the fact that their offense was just good enough to get by. This year though, they're #12 nationally in scoring offense and humming right along under the direction of Cam Cameron. In a battle of undefeated SEC Tigers(/War Eagles?), this game will be very tough for Auburn to keep up in.

Your turn, readers! Take your picks!