The Week That Was for GT's Opponents: Week 3

A Stats Run Down of our Opponents.

Share All sharing options for: The Week That Was for GT's Opponents: Week 3

Normally each week this article contains some information about how our opponents did that week. But I honestly hated writing that article. I'm a stats guy and I don't want to read game recaps, I want to look at the stats. And also, I found out AJC does the same thing I was doing :/. So read that if you want to know how GT's opponents did last week. What I am more interested in is how are Georgia Tech's opponents shaping up in regards to their season performance. How are our performances each week stacking up to theirs. I think I have found a way to answer some of my own questions. I'm hi-jacking my own column, hope you guys like it.

F/+ ratings are a combination of play by play metrics developed by Bill C. of Football Study Hall and by drive metrics developed by Brian Fremeau of his own awesome site. A higher F/+ ranking is better and I've done my best to color code it and label it. Here is a graph of our opponent's weekly F/+ rating. This still includes preseason projections and half of it only includes FBS games so GT only has 1 game of performance in the FEI data. And remember the weeks are the F/+ ratings GOING IN TO that week. 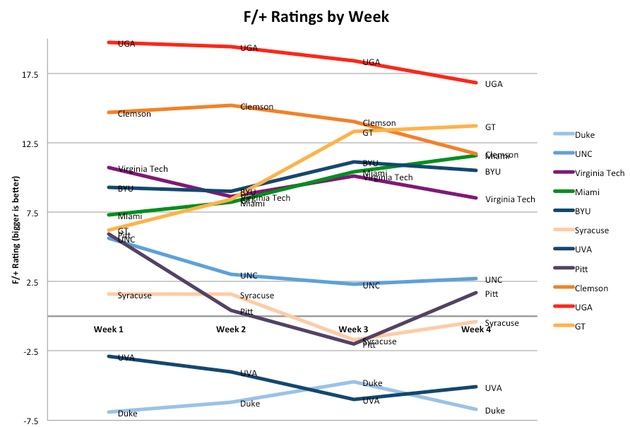 Honestly if you had told me we were ranked higher than Clemson in a ranking system I would have told you the system had some serious flaws. And I think this will right itself, I don't think anyone here actually thinks Georgia Tech is a better overall team than Clemson. What is more interesting to me is the VT - BYU - Miami - GT flip flop that has happened in three weeks. I don't see how BYU is ranked so high, they lost to Virginia, like, not not-played-well, they straight up lost. And then beat an underwhelming Texas team. Personally I could stare at this all day, but what are yall's observations.

I'll keep updating this table each week. This is the basis of opponent adjustments; how well you performed against your opponents relative to how everyone else performed. As we get more common opponents we can start putting our performance against Duke in context.