Duff'd It! Rankings and other Accolades, Week 3

The ACC has been reduced to mortal status (thanks, Wake Forest!) and Pac-12 referees are horrendous. Everything is normal again!

Share All sharing options for: Duff'd It! Rankings and other Accolades, Week 3

This weekend was a tough one in the house of Duff - among other stories, Akron was this close to knocking of Michigan in the Big House, and Notre Dame staged a massive comeback to stay ahead of Purdue in the Indiana state championship race. Fortunately, college football always has more than enough Duff to go around. To the rankings!

5. Florida International. Former coach Mario Cristobal basically built the Panthers' football program, bringing them their first winning season, first conference championship, and first bowl win. So, after a hiccup last year, the athletics department took a deep breath, recognized that every football team will have their down years, and put their full support behind hahaha no I'm just kidding they fired Cristobal and replaced him with Ron Turner. They lost to Bethune-Cookman by three touchdowns this weekend, so..... we'll mark that as a "work in progress".

4. Nebraska. They say the more easily you give out an award or honor the more it gets devalued, and while the Cornhuskers decision to wear black against UCLA was most certainly a simple aesthetic decision and not some honor for the entire team, the results still held true. After racing out to a 21-3 lead, the black shirt defense became the black shart defense, giving up 38 unanswered points in 31 minutes of football. Bo Pelini has responded to this in typical fiery Bo Pelini fashion, with the added bonus of getting into a Twitter fight with Husker legend Tommie Frazier. Bring me my popcorn!

3. Texas. Hey let's check in on how the Texas is doing with new defensive coordinator Greg Robinson - oh, they're doing horribly! Only everyone could have predicted that. On the the other hand, Longhorns, you did only allow 272 rushing yards this week, so I guess that's improvement? As long as you ignore minor details like the 44-23 final score, of course. Watch this spot next week when we check back on Texas' new new defensive coordinator, Al Groh!

2. Boston College. It's hard to tell who's more upset about losing 35-7 to USC, Eagles: your own fans for getting drubbed in such a big out of conference game..... or USC's fans, for making Lane Kiffin look like a genius. You allowed a USC offense that only scraped 193 yards against Washington State last week to rack up 521 this week, a defensive performance so bad it made even Max Wittek look competent. You brought shame to the ACC this weekend, Boston College, but at least you didn't lose to Louisiana-Monroe. (Hi again, Wake Forest!)

1. Texas A&M. PAWWWWWWWWL lemme tell you something we beat them Aggie boys on Saturday and put 49 daggone points on them skinny britches and Bama's gonna win number sixteen this year ROLL TIDE

But lemme just say something right here real quick PAWWWWWWWWWL we let that Johnny Football kid throw for over four hunnerd yards and I just can't sleep at night what happened to our defense I knew Kirby Smart had gone soft we need to hire a defensive coordinator who's up to the challenge of coaching in the lord's blessed conference, the S-E-C

Honorable mention: the refs of TCU-Texas Tech. In their defense, the entire crew drank peyote before the game and it's really hard to ref a football game while tripping balls on mescaline; however, they should have known that a college football game is not the best time to go on a vision quest.

"Hey come on talk about the end of Wisconsin-ASU!" I'll get to that in a second, but first, witness the Duke onside kick. Marvel at its abject refusal to move forward, so much that it in fact begins to move backward. Watch it dance gracefully into the open hands of a Duke player, giving Georgia Tech the ball because that kick didn't even make it five yards forward, much less ten.

So let's talk about the end of Wisconsin-Arizona State for a minute, because weird shit happens out in the desert at night, and this certainly qualified. Wisconsin is driving down the field for a potential winning field goal. Quarterback Joel Stave takes the snap, and then takes a knee. The whistle blows. The play is dead.

Maybe half the personnel on the field gets this message. Arizona State's defense certainly doesn't; they jump on the ball, thinking it's a fumble. Meanwhile, the refs are busy not spotting the ball, and Wisconsin is making no effort in getting to the line to try to spike the ball.

Stave doesn't realize what's going on until it's too late. The game is over. Wisconsin loses. There is plenty of fault here - on the refs, for not calling any sort of penalty on Arizona State for diving on a dead ball and delaying the game; and on Stave, for whom it did not seem to register just how little time he had left and upon whose shoulders the Badgers' failure to act lays.

Some people venture into the desert and find beauty in near desolation. Others only get lost and end up dehydrated, appearing to suffer from dementia in the process. On Saturday evening in Tucson, ASU saw the beauty of victory, while Wisconsin fans saw a world gone mad. 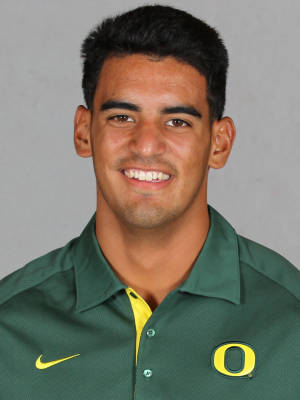 Johnny Manziel's 464 yards and five touchdowns plus 98 more yards on the ground to help torch Alabama's defense in historic fashion would have made him the "no shit" winner for this week, but there was the slight issue of not winning his game, no doubt helped by his two very bad interceptions (one in the endzone, the other for six).

Luckily, in to fill the void was Marcus Mariota, who accrued 456 yards and four touchdowns in the air and added a fifth on the way to demolishing Tennessee 59-17 and burning Neyland Stadium to the ground. (It's still burning, and will continue to do so for the next three months.) And he did all of this before being taken out with twenty minutes left in the game, because at that point the score was 52-7 and to leave him in would have been considered a war crime in the state of Tennessee.

So congratulations, Marcus! Your reward is this shiny plastic doubloon. It's not actually worth anything, but knowing Oregon you'll have a new helmet based on it next season this Saturday.