The Week that Was: Week 2

Checking in on the Week 2 performance of GT's opponent's

Share All sharing options for: The Week that Was: Week 2

Each week we here at FTRS are going to take a quick look at how our opponent's performed that week. In addition each week the changes in F/+ rating of our opponent's will be tracked. F/+ rating is the best publicly available rating of college football teams, more info can be found here.

F/+ Ratings of our Opponents, by week 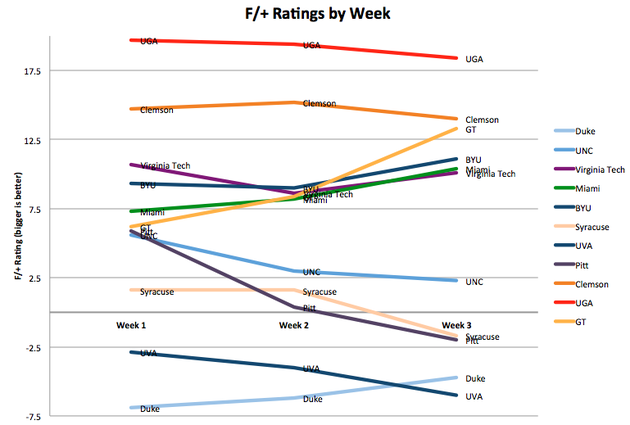 I am surprised by how much UNC has fallen from the GT - BYU - VT - Miami group, I didn't think they looked that bad against USCe and Middle Tennessee State. Expect GT's ratings to go down after this week, even if we play well. Right now the Elon game is throwing off our ratings in the play by play ratings because the opponent ratings are still out of whack. However, I still expect us, if we play well, to stay with Miami - BYU - VT (I think we will still be higher, none of them have really done anything great. And if you are thinking Miami just beat UF, then read on to their section.) Thoughts?

Duke's QB got hurt pretty early in this game, and they still pealed off a pretty solid win against Memphis. The new QB, Brandon Connette, completed 66% of his passes for 9.4 yards per attempt and 2 touchdowns, that is pretty good. It appears that Brandon will be the starter for our game as well. Connette appears to be a capable backup and a QB who can throw the ball. For more check out Duke Sports Blog

Well VT put a notch in the win column this week, albeit against a FCS team, Western Carolina. They only had a 7-0 lead after the first quarter, and that score was off a pick six. Even though it appears they were sluggish, I wouldn't take too much when playing an FCS team that has lost 14 straight. For more check out Gobbler Country.

Duke Johnson looks awesome and Stephen Morris looks awful, what else is new? After this win Miami actually became even more of an underdog against Florida State, according to Vegas. While a win over a ranked SEC team is great, Miami gained an 18 point advantage off turnovers, and only won by 5. Their offense and special teams hurt them more than they helped, according to Brian Fremau's Game Splits. However, any win is a good win for the ACC. For more check out State of The U.

BYU lost to Virginia last week so naturally this week they go out and rush for over 500 yards against a ranked Texas team...what? BYU's offense played off the charts. This rushing attack took me completely by surprise and will be something to look out for when we play them. For more check out Vanquish The Foe.

Syracuse fell to Northwestern 48-27 in the 2nd battle of northern teams I know nothing about. But really though, I couldn't tell you much about this game or this team really. Syracuse's defense got torched in this game, and apparently they are considering switching QBs already. For more check out Troy Nunes is an Absolute Magician. (Who is Troy Nunes?)

Ouch. I really feel bad for Virginia. The lost 59-10....FIFETY-NINE TO TEN!! Why even schedule this game? just as much as I say don't take anything away from FCS opponents, don't think Virginia is terrible because they got run out of the building by Oregon. I'm not sure we would suffer that much better of a fate against Oregon's offense. For more check out Streaking the Lawn.

Pitt was off after the labor day game against FSU. For more check out Cardiac Hill.

After taking care of business against UGA the Fighting Dabo's beat up on in state foe South Carolina State (was that a college from the Key and Peele skit??). Clemson has a bye week to recharge. For more check out Shakin the Southland.

Am I the only one who is terrified to play UGA? They have played the toughest schedule of the year so far, and have come away very impressive. They have a great offense, and while their defense continues to get lit up, they are playing great offenses as well. This team looks big, fast, and strong and they are fun to watch.

Is there anything else you would like to see on Georgia Tech's opponents each week? Let me know in the comments.